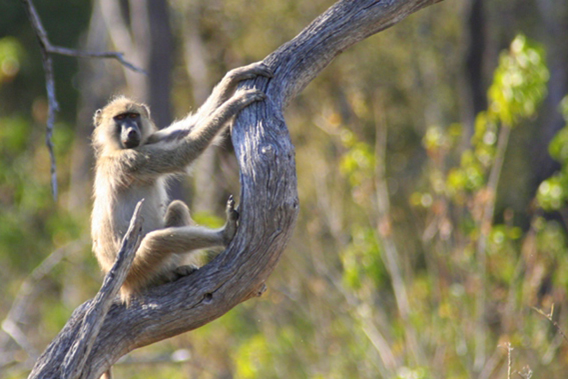 Remember the ‘man with no name’ played by Clint Eastwood in A Fistful of Dollars, Mr. Darcy in Jane Austen’s Pride and Prejudice, or the bubbly cute girl in every romantic comedy from Legally Blonde to Breakfast at Tiffany’s? Each of these characters represent an over-the-top type of human personality—loner (man with no name), aloof (Darcy), and nice (the bubbly cute girl)—but a new study in the Proceedings of the National Academy of Sciences (PNAS) finds that it’s not only humans that show such distinct types, but baboons as well. Studying 45 female chacma baboons in Botswana’s Moremi Game Reserve over seven years, the researchers found that such personality types, unrelated to social statues, helped to determine the animals’ overall sociability and the stability of their relationships.

“We identified three relatively stable personality dimensions, each characterized by a distinct suite of behaviors,” the researchers write, noting that ‘loner’ baboons largely kept to themselves, ‘aloof’ baboons were aggressive and only communicated with baboons that were higher on the social ladder, while ‘nice’ baboons were easily approached and gregarious with others no-matter their social position. Such differences in personality are important since “among baboons, females who establish close, enduring grooming relationships with others have greater longevity and offspring survival” the researchers write.

Approaching the research form the “bottom-up” the researchers didn’t assume personalities for the baboon females, but instead followed where their data on baboon behavior and communication led them.

“[We used] the behavior of the baboons themselves to determine whether any personality dimensions emerged, without any assumptions about what these dimensions might be,” they explain.

For example, they found that ‘nice’ baboons were most likely to communicate to females below them on the social ladder and, in addition, retained numerous stable relationships.

“Animals scoring high on Nice grunted even to lower-ranking females without infants, a context in which they themselves derived no immediate benefit,” the researchers write. However both aloof and loner baboons only communicated through grunts when their was an immediate benefit to themselves, such as avoiding aggression or having access to infants. Still, aloof baboons also had strong relationships, in some cases even more stable than ‘nice’ baboons, causing the scientists to theorize the aloof baboons formed especially strong bonds with a small number of compatriots (think Darcy and Bingley), whereas nice baboons knew how to be popular, but their relationships remained a tad superficial.

Personality types also correlated with stress levels. Loner baboons consistently had the highest glucocorticoid levels, a measure of stress. The benefits of being a loner baboon were elusive, begging the question as to why this personality type had evolved at all.

In the seven years of research the baboon troops, the scientists found that personalities weren’t wholly fixed.

“As in humans, baboons’ personalities showed some plasticity, and females did not always retain the same personality styles across time,” the scientists write. “Nonetheless, females were significantly more likely to retain, rather than change, their personality style from one year to the next.”

Notably the researchers found no evidence that personality types were linked to social status, kinship or age, meaning that personalities types, much like in humans, had developed outside of social factors. Although questions remain as to how or why personalities develop, scientists are increasingly finding that they shape other animals’ lives.

“There is mounting evidence that personality traits in animals are biologically meaningful. Personality traits influence behaviors as diverse as dispersal, mate choice, nest defense, and helping behavior in insects, fish, birds, and mammals,” the scientists write.

(08/24/2012) Migrating Whimbrels — a type of shorebird — may struggle for hours against winds when trying to cross the Caribbean during hurricane season but get a huge boost as they fly out of storms, report researchers from the Center for Conservation Biology in Williamsburg, Virginia.

(08/07/2012) In order to disperse their seeds, large-fruited tropical trees probably relied on massive mammals that roamed the earth over 10,000 years ago. But with giants such as the mastodon now extinct, thieving rodents—who continually excavate and rebury others’ seeds—may be filling their role, according to a new study in the Proceedings of the National Academy of Sciences (PNAS).

(06/25/2012) Nocturnal fish—which sport big eyes for improved night vision—are taking back the day in the coral reefs of the Tabuaeran Atoll, according to a new study in the open-access journal PLoS ONE. Overfishing has plundered the Pacific atoll of many of its notable predators, including sharks and barracudas, causing ripple effects through the ecosystem. One of these emerging changes appears to be that with less fear of being eaten, nocturnal fish are increasingly venturing out during the day.