Brazilian President Dilma Rousseff signed into law a revised version of the country’s Forest Code, vetoing some of the most controversial changes proposed by agricultural interests in Brazil’s Congress.

The law, signed late Thursday after President Rousseff voted nine clauses Wednesday night, requires landowners to replant millions of hectares of illegally cleared land and retains earlier provisions for maintaining forest cover of 80 percent on private properties in the Amazon rainforest. However the revisions now allow landowners to count forests along rivers and hillsides as part of their “legal reserve”. Previously these zones — where forest preservation is mandatory — were additional to the 80 percent requirement.

The new forest code also requires landowners to participate in a registry, whereby they declare their holdings — including the coordinates — to the government. The registry will enable authorities to better distinguish between legal and illegal deforestation and track compliance with environmental regulations. Landowners who fail to register won’t be eligible for agricultural loans or other assistance from the state.

The law wasn’t immediately welcomed by either environmental activists or the farm lobby. According to Reutersa, the ruralista bloc in the lower house of Congress may challenge the new law as “unconstitutional”. Meanwhile Greenpeace call the new Forest Code an assault on the Amazon.

“President Dilma has ignored the call of the people of Brazil and taken final steps to approve a new law that opens the Amazon up for destruction,” wrote Greenpeace campaigner Jessica Miller in a post on the group’s blog calling for the adoption of a national “Zero Deforestation” target.

“No to amnesty, no to encouragement of illegal logging,” she was quoted as saying by Reuters.

The annual deforestation rate in the Brazilian Amazon has fallen dramatically since 2004, but environmentalists worry that the new Forest Code could reverse that trend, pointing to recently released data from the Brazilian government which shows a sharp rise in deforestation over the previous two months. 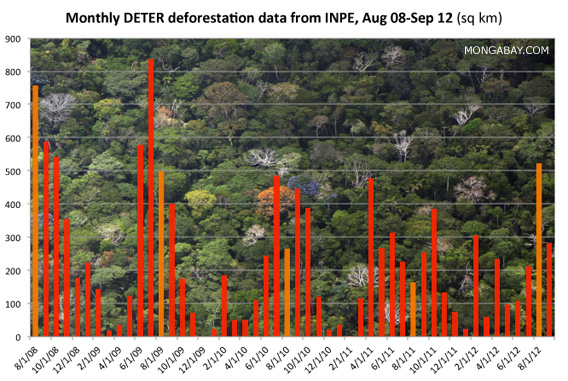 However, despite the recent jump, Brazil’s rate of deforestation is still well below levels of a decade ago. Overall Brazil has the largest extent of tropical forest cover in the world. More than 60 percent of the Amazon rainforest lies within Brazil.

(03/07/2012) A coalition of 200 organizations, known as the Comitê Brasil in Defense of Forests and Sustainable Development, rallied today in Brasilia against proposed changes to Brazil’s Forestry Code. The code, which was supposed to be voted on this week but has been delayed to shore up more support, would make changes in over 40-year-old code that some conservationists fear could lead to further deforestation in the Amazon. Protestors called on the President of Brazil, Dilma Rousseff, to veto the bill as it stands now, holding signs exclaiming, “Veta Dilma!” (“Veto it Dilma!”).

Science has been nearly silent in Brazil’s Forest Code debate

(08/09/2011) A recent push to revise Brazil’s forest code has emerged as one of the more contentious political issues in the country, pitting agribuisness against environmentalists trying to preserve the Amazon rainforest.  Historically, the forest code has required private landowners to maintain a substantial proportion of natural forest cover on their properties, though the law has often been ignored. While both sides claim to be basing their recommendations on the ‘best science’ available, Brazilian scientists say they haven’t had much of a voice in the debate. In fact, says  Antonio Donato Nobre, a researcher at the Amazon Research Institute and Brazil’s National Space Research Institute, ‘throughout the development of the said revisions, Congress has neither invited nor commissioned a coordinated and serious contribution from the scientific community.’