Today, September 21, is the “International Day of Struggle against Monoculture Tree Plantations”, an annual event organized by a coalition of social and environmental groups. Here, Isaac Rojas, a Costa Rican who is Friends of the Earth International coordinator of its Forest and Biodiversity Program, expresses his view point on industrial plantations.

Public environmental awareness has come a long way since September 1962, when Rachel Carson’s ‘Silent Spring’ was published, stimulating the birth of the environmental movement.

This movement may be fifty years old, but nowadays you can feel ‘green’ by helping destroy forests instead of protecting them, for instance by clicking online a ‘plant a tree’ button on a seemingly well-meaning website.

I have been an environmentalist my whole life and am increasingly disturbed by misleading plantation ads. I would strongly urge anyone to plant their own tree instead of paying for one in a distant plantation.

The reality is that timber plantations have a negative impact on biodiversity, communities, and local economies. Large-scale plantations are not a solution to climate change nor to biodiversity loss. They are simply a huge concern and cause numerous problems in many countries, for instance in Indonesia.

Most people are not aware of these problems. In fact many people, including some ‘environmentalists’, seem to believe that large-scale tree plantations heavily sprayed with chemicals are desirable or even sustainable.

For these reasons, Friends of the Earth International, together with many social movements around the world, are raising awareness about the problems associated with timber plantations during an ‘International Day Against Monoculture Tree Plantations’ on September 21st.

A massive increase in monoculture tree plantations is predicted by the United Nations Food and Agriculture Organization: between 40 and 90 million hectares will be planted by the year 2030. This number does not even include the rapidly expanding areas of oil palm plantations in Indonesia and around the world. 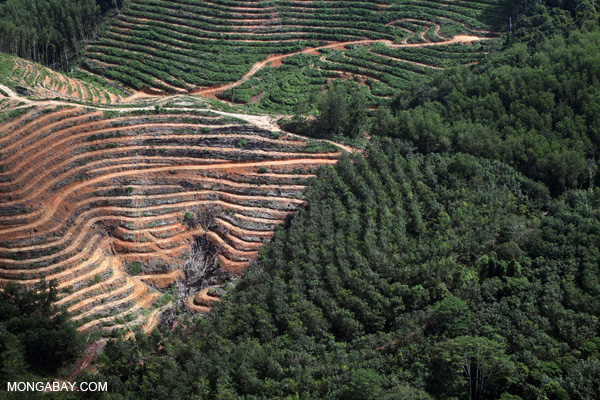 What is a forest? The current definition of forests used by the United Nations is very problematic. It includes plantations – branding them ‘planted forests’ and giving the idea that plantations are forests – and therefore promotes the further expansion of plantations.

But branding a plantation a ‘forest’ is like branding a big swimming pool a ‘lake’. Tree plantations are not forests.

A forest is a complex, biodiversity-rich, self-regenerating system, consisting of soil, water, a microclimate, and a wide variety of plants and animals in mutual coexistence. Forests, which host more than 70% of terrestrial biodiversity, are critical for the survival of people and the planet, and are thus priceless.

1.6 billion people rely on forests, including 60 million indigenous people who are entirely dependent upon forests for their livelihoods, food, building materials and medicines. They have rights that we need to respect, strengthen, and promote further.

In contrast, monoculture plantations have very little biodiversity, require ongoing human intervention – including fertilization – and the use of large amounts of herbicides and pesticides.

These plantations also offer nothing to Indigenous Peoples and local communities who lose lands and resources to monoculture plantations.

With tree plantations, corporations gain access and control of forest land and resources, often depriving communities of their means of subsistence. Usually, they negatively impact the cultural and biological diversity of the area.

Communities who do not join plantation projects often suffer intimidation, as we witnessed in countless countries from Colombia to Mozambique to Indonesia.

Friends of the Earth groups collected testimonies and case studies showing that plantations have very serious impacts on local populations and the environment. They fail to fulfill the promises of job creation, sustainable development, climate change mitigation and biodiversity protection. 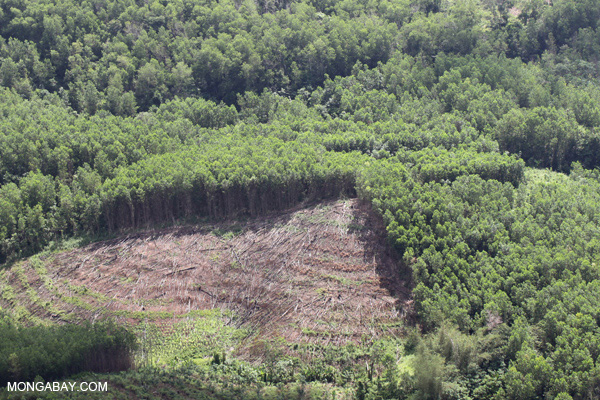 THE BIG SIX vs REAL SOLUTIONS

BASF, Bayer, Dow, Dupont, Monsanto and Syngenta, the world’s ‘Big 6’ pesticide manufacturing corporations, are obviously happy if we believe that large-scale tree plantations, heavily sprayed with their pesticides, are ‘sustainable’, since it keeps their profits on the rise.

Shockingly, over 98% of their sprayed insecticides and 95% of herbicides reach a destination other than their target species, including non-target species, air, water, bottom sediments, and food[1].

The ‘Big 6’ certainly do not want us to implement the forest-based solutions urgently needed to tackle the climate crisis and to preserve biodiversity, as these solutions do not include large-scale plantations nor their dangerous chemicals.

Instead of large-scale tree plantations and associated chemicals, our societies need to properly manage our remaining forests, and apply agroecology. This means applying ecological principles to the production of food, fuel, fiber, and pharmaceuticals and the management of agroecosystems.

The solutions which we should urgently opt for include :

– Implement and promote ‘community management of forests’, in essence regulations and practices used by many communities for the conservation and sustainable use of forests;

– Implement and promote food sovereignty, which means that people have a right to sufficient, nutritious, healthy, ecologically-produced and culturally adequate food, as well as implementing corresponding public policies;

– Decrease our current, unsustainable patterns of consumerism, in particular the demand for forest products such as pulp and paper, which is one of the main underlying causes of the expansion of monoculture tree plantations. Reducing our consumption and consumerism would also alleviate demand for dangerous chemicals.

As long as we are not implementing the real solutions we should also keep on raising awareness around these issues.

That is why on September 21st – the International Day Against Monoculture Tree Plantations – Friends of the Earth groups plan various activities around the world, including challenging the expansion of palm oil tree plantations destined for agrofuel production, challenging monoculture tree plantations grown for export, and exposing over-consumption and consumerism.

September 21st is however first of all a celebration: we celebrate resistance to large scale tree plantations and the struggle for real solutions.