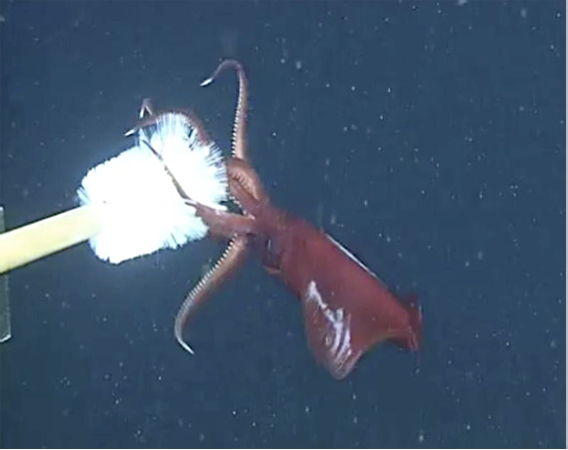 Octopoteuthis deletron—this deep-dwelling, unassuming little squid may appear plain and boring, but when threatened, it has a peculiar way of defending itself. This foot-long invertebrate behaves a bit differently than most of its close cousins: it drops its arms.

Most cephalopods, which include the world’s squids and octopi, have a muscular bag located near their gastrointestinal system containing a concentrated amount of melanin, which when expelled from the body, produces a thick, viscous cloud of ink. This ink cloud confuses predators, giving the cephalopod a chance to escape. Similar in theory, O. deletron confuses predators, but sacrifices more than just ink in order to escape. When threatened, this sacrificial cephalopod will actually release its appendages to create confusion. Armed with special hooks, the squid’s appendages are capable of sticking into the flesh of a predator. Once stuck, the squid drops the limbs, which wiggle and glow (a process known as bioluminescence), confusing the predator, and giving the squid a chance to escape.

While this behavior is not new to science (many other animals can release parts of their bodies to evade predation, ie. lizards drop their tails, sea stars lose their arms, etc.) it is the first time it has been observed in this species of squid. Although this species of squid is still capable of expelling ink, arm-dropping may be a more effective way of deterring predators in an environment with limited visibility.

Stephanie Bush, a post-doctoral researcher at the University of Rhode Island, was the first human to witness this unique behavior. She was prompted to investigate the defensive strategy of O. deletron when she observed that animals had arms of different lengths. There was some speculation that arm autonomy (arm-dropping) might be a method employed by this species, but no one had actually observed it. Outfitted with a remotely-operated underwater vehicle, Bush performed some behavioral experiments on the squid in Monterey Bay in California. After probing a squid with a bottle brush, the hypothesized arm-dropping mechanism proved to be true.

“The very first time we tried it, the squid spread its arms wide and it was lighting up like fireworks,” she said. “It then came forward and grabbed the bottlebrush and jetted backwards, leaving two arms on the bottlebrush.”

Fortunately for the squid, they are able to regenerate their arms after sacrificing them, though there is an energy cost associated with such loss. Animals probed in experiments did not immediately drop their limbs and tend not to do so unless they perceive the threat is great. Upon inspection of body tissue, Bush noted that squid are able to “economize” their losses by releasing appendages at predisposed stress points, reducing tissue loss.

Octopoteuthis deletron is an important source of prey for deep-sea fish, beaked whales, and seals. While it is widespread and abundant in the Gulf of California, its role in the marine ecosystem is not fully understood. Scientists at the University of Rhode Island are continuing to research its arm-dropping phenomenon as they study the behavior of this unique, deep-sea squid.