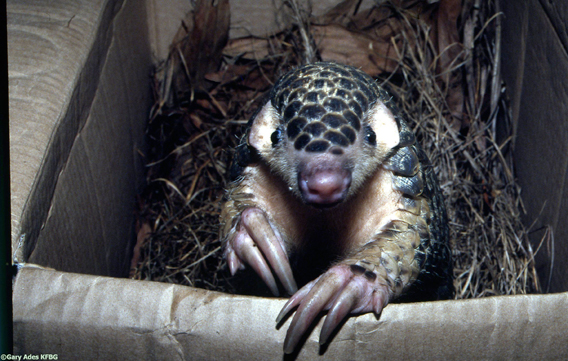 The Chinese pangolin has recently been upgraded to Endangered on the IUCN Red List due to relentless poaching. Photo by: Gary Ades/KFBG.

Scaly, insect-devouring, nocturnal, and notoriously shy, pangolins are strange mammals who remain unknown to many. But they are facing a major crisis as they are stolen from the wild in East Asia to serve as meat or traditional medicine. In Asia, two of the four species are now listed as Endangered due largely to poaching. Now, a new expert group through the International Union for the Conservation of Nature (IUCN) aims to work toward better research and conservation of the world’s imperiled pangolins, starting with launching a new website, PangolinSG.

“Each year, tens of thousands of illegally traded pangolins are seized,” says pangolin expert Dan Challender, co-Chair of the new IUCN Pangolin Specialist Group. “One of the biggest problems facing conservationists is a lack of data on the illegal trade, its routes, its sources, and even pangolins themselves. The new IUCN Pangolin Specialist Group and website will tackle this problem.”

Currently the Pangolin Specialist Group includes 65 scientific members working to better understand these cryptic species and come up with on-the-ground solutions to the poaching crisis. One of the gravest threats to the species, in both Asia and Africa, is an almost complete lack of data.

“With two exceptions, there are no population estimates for any species of pangolin anywhere and little is known about pangolin ecology and biology or their conservation needs, making it difficult to determine the severity of these threats to pangolin populations,” reads the new website.

Pangolin meat is considered a delicacy in China and Vietnam, while the animals’ telltale scales are considered curative in Chinese Traditional Medicine despite a lack of evidence.

Although pangolins share the same ecological niche as South American anteaters, genetic evidence actually shows that pangolins in a bizarre twist of evolution are most closely related to carnivores.