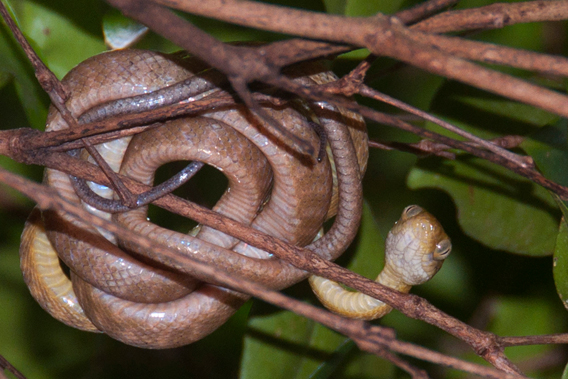 The accidental introduction of the brown tree snake on Guam has resulted in a loss of birds and a subsequent explosion of spiders. Photo by: Isaac Chellman.

The island of Guam is drowning in spiders. New research in the open-access journal PLOS ONE has found that in the wet season, Guam’s arachnid population booms to around 40 times higher than adjacent islands. Scientists say this is because Guam, a U.S. territory in the Pacific, has lost its insect-eating forest birds. Guam’s forests were once rich in birdlife until the invasion of non-native brown tree snakes (Boiga irregularis) in the 1940s decimated biodiverse bird communities. Now, the island is not only overrun with snakes, but spiders too.

“You can’t walk through the jungles on Guam without a stick in your hand to knock down the spiderwebs,” says lead author Haldre Rogers, a Huxley Fellow in Ecology and Evolutionary Biology at Rice University.

The study proves that “birds have a strong effect on spiders,” Rogers says. “Anytime you have a reduction in insectivorous birds, the system will probably respond with an increase in spiders.”

Brown tree snakes, which are native to Australia and Papua New Guinea, have been an ecological disaster for Guam, but to date no one has determined a method to rid the island of the rarely-seen, nocturnal snakes. In 2010, the U.S. Department of Agriculture ‘bombed’ the island with dead, frozen mice laced with acetaminophen to poison the snakes, and the country already spends over a $1 million very year working to make sure the brown tree snake doesn’t make it off the island to invade somewhere else. The snake population is believed to be currently in decline due to exceeding its overall carrying capacity, but its too late for most of Guam’s birds. Nine birds have become locally extinct in Guam with five of these (either species or subspecies) found no-where else, including the Guam flycatcher (Myiagra freycineti) which was last seen in 1983.

“Arachnophobes and those afraid of snakes would do well to stay out of the forests of Guam,” he added. But the problem may go beyond Guam according to Rogers.

“With insectivorous birds in decline in many places in the world, I suspect there has been a concurrent increase in spiders,” she says.

Currently, Guam provides a natural laboratory whereby one can see just how the loss of one group of species impacts others.

“There isn’t any other place in the world that has lost all of its insect-eating birds,” Rogers said. “There’s no other place you can look to see what happens when birds are removed over an entire landscape.”

While Rogers had her teams suspect that spiders are more abundant on Guam due directly to a lack of predation from birds, they also write that bird loss may have other impacts that benefit spiders. For example, spiders no longer have to compete with insect-eating birds for prey and may expend less energy on re-building webs destroyed by flying birds.

For now Rogers says snakes and spiders won’t keep her away from continuing to explore Guam’s bizarre environment, including a rainforest almost wholly empty of birdsong.

“Ultimately, we aim to untangle the impact of bird loss on the entire food web, all the way down to plants,” she says. “For example, has the loss of birds also led to an increase in the number of plant-eating insects? Or can this increase in spiders compensate for the loss of birds?” 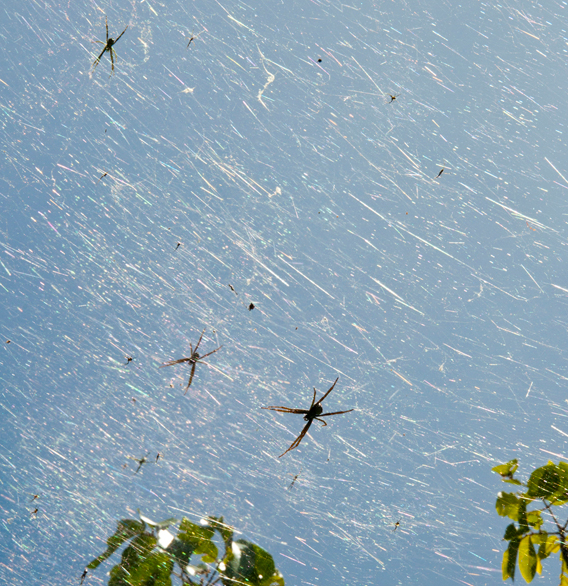 (12/06/2010) I have a declarative statement to make: cycads are mind-blowing. You may ask, what is a cycad? And your questions wouldn’t be a silly one. I doubt Animal Planet will ever replace its Shark Week with Cycad Week (perhaps the fact that it’s ‘animal’ planet and not ‘plant’ planet gave that away); nor do I expect school children to run to see a cycad first thing when they arrive at the zoo, rushing past the polar bear and the chimpanzee; nor do I await a new children’s book about a lonely little anthropomorphized cycad just looking for a friend. In the world of species-popularity, the cycad ranks pretty low. For one thing, it’s a plant. For another thing, it doesn’t produce lovely flowers. And for a final fact, it looks so much like a palm tree that most people probably wouldn’t know it wasn’t. Still, I declare the cycad to be mind-blowing.