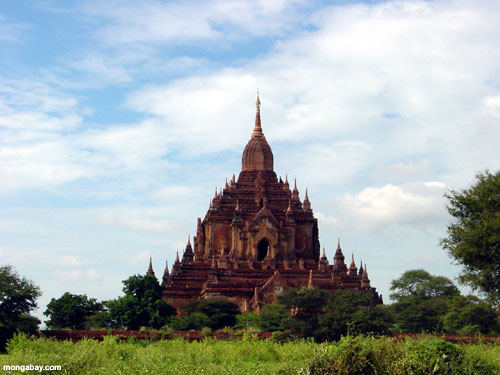 As a ‘road junky’, I know what you’re thinking: ‘Burma is reforming so quickly, let’s rush off to Burma before tourists snatch up all its unspoiled beauty!’ I had the same idea, and after an incredible trip to Burma, I have to say that I was right. However, I must tell you that traveling in Burma is both rewarding and challenging. In Burma, I found myself spending a day in Bagan being driven from majestic temple to majestic temple by a betel-chewing, elementary-school-aged, driver who took the horse cart right through a plowed and planted field on the way to Sule Pagoda where I watched the sunset of a lifetime. I found myself in awe of the red-brick stupas, colorful frescoes, pastoral simplicity, and peace found in off-season induced solitude amongst some of the ruins. Still, in spite of these wonderful experiences, I also found that my optimism over the country’s recent transformation was sometimes tempered by evidence of its tumultuous past.

I had come to Burma with reasonable awareness of its political realities. I had even brought with me the January 26, 2011 issue of Time magazine in which my letter responding to the cover story on Aung San Suu Kyi was published, just in case I should be lucky enough to ask her to sign it. Ironically yet auspiciously, this was a complete impossibility because “The Lady” had left to travel the world almost immediately after I entered Burma. This meant that it was even easier to find evidence of political change than it would have been otherwise. While support for Aung San Suu Kyi was previously almost imperceptibly subtle due to fear of harsh government responses, Aung San Suu Kyi fever was quite evident around the time of her birthday. She graced the pages of all newspapers, and some Burmese even displayed her visage prominently on t-shirts, tri-shaws, and taxis. While these were very-visible, positive developments, vestiges of dictatorship could still be seen by those who paid attention to them.

In Mandalay, people were torn from my bus by plain-clothes policemen. In Yangon, the university remained tightly locked up as it has been since the 1988 protests and subsequent massacre of at least 3,000 people at the hands of their own government. Everywhere, power-outages were frequent, internet was slow, and to my mother’s great consternation, cell phones were useless. The hotel prices in the July 2012 Lonely Planet Guide were consistently less than half the prices that I found in June, and I could not rely on the guide for much of anything. Unable to access money easily anywhere in the country, my sister and I even found ourselves standing atop wrinkled American greenbacks in desperate attempts to straighten them enough for our hotels to take them. Such evidence of underdevelopment was especially visible at the national museum where the collection was so poorly lit that it was painful to look at, and in the style of authoritarian governments which masquerade as grand states, the brochure emphasized the gargantuan size of the building which housed the sparse collection. In true propagandist fashion, the museum’s top floor even held an exhibit stressing the importance of minority-nationality allegiance to the government, and attempting to perpetuate the myth that is “The Union” of Myanmar. The irony was palpable, especially in light of the ongoing ethnic violence which aims to exterminate and displace Rohingya Muslims.

The past and its vestiges were a little harder to sense in Bagan, yet they still colored my impressions of its wonders. It was occasionally difficult to ignore the tops of blue, plastic pipes in the centers of gray, concrete chedis, and easy to imagine that they were likely installed by unwilling laborers. I also despised peering at beautiful buddhas from behind the locked gates and bars which enclosed them. I desperately tried to squeeze my camera through the bars to take unobstructed pictures of the buddhas, but I eventually gave up and chose instead to capture the buddhas as they were in reality: locked away. After a while, I could not help but think that the bars were as much to keep the buddhas in as the vandals out. It dawned on me that, like many of the thousands of Burmese monks who protested courageously for democracy, the Buddhas were also encaged. Even some of their temples seemed much less like sanctuaries than zoos or prisons, tastelessly littered with souvenir stalls and government ticket-checkers.

I was reminded of the imprisoned Buddhas when I watched Aung San Suu Kyi give her Nobel-prize acceptance speech over a lunch of coconut curry at a restaurant called ‘Be Kind to Animals’. As the Burmese were watching Aung San Suu Kyi on tv with great enthusiasm, I felt the weight of her words: “we must remember that even one prisoner of conscience is one too many.” I hope that you will enjoy the beauty of Burma as I did, but that you won’t forget these words as you tour the country. Now, as Burma begins to open its gates, it does so with caution. The government suffers from the legitimate fear that freedom will begin to come through the bars, and that dangerous ideas will liberate the people. Academics suffer from the legitimate fear that vandals will rob the country of its resources, and culture through irresponsible enterprises which do not benefit the Burmese people. Tourism can be one of these enterprises if tourists are not vigilant. Burma has a long way to go, and the true liberalization of the government will be tested every day. Enter the country with an open mind, but arm yourself with a healthy sense of skepticism with regards to the political situation. How free can a country really be when it forces photographers and journalists to lie about their occupations in order to get visas? I can only hope that the government will not add another college student to its list of banned individuals when I apply for my next visa. Only time will tell.

Hope Loudon is a student of International Affairs at The University of Nevada, Reno, and can be contacted at hopeloudon (at) yahoo.com