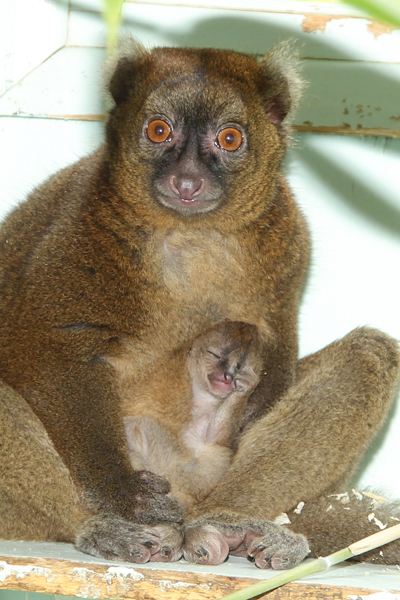 
Greater bamboo lemurs (Prolemur simus) are one of over a hundred lemur species found only on the island of Madagascar. Listed as Critically Endangered, there are only around 150 individuals known in the wild, making them one of the world’s most imperiled primate species. A new baby was recently born in captivity in the UK’s Port Lympne Wild Animal Park.

“We are absolutely delighted that Manantena, or Belle, as we call her, and her partner, Zig have a new baby. They are a lovely family unit and Belle is a brilliant first time mum. These wonderful animals are critically endangered in the wild and there are only 22 in collections around the world and this is the third birth in captivity this year, so it’s very special,” Simon Jeffery, head primate keeper at the park, said in a press release.

So rare, the greater bamboo lemur was believed to have been extinct for decades before its rediscovery in 1972. Today the lemur remains hugely imperiled by habitat loss and poaching for bushmeat.

A recent assessment by the IUCN Red List found stunningly that 91 percent of the world’s lemurs are currently threatened with extinction, or 94 out of 103 lemur species.

“The results of our review workshop this week have been quite a shock as they show that Madagascar has, by far, the highest proportion of threatened species of any primate habitat region or any one country in the world,” said Christoph Schwitzer, the Head of Research at Bristol Zoo Gardens who serves on the IUCN Species Survival Commission’s Primate Specialist Group. “As a result, we now believe that lemurs are probably the most endangered of any group of vertebrates.” 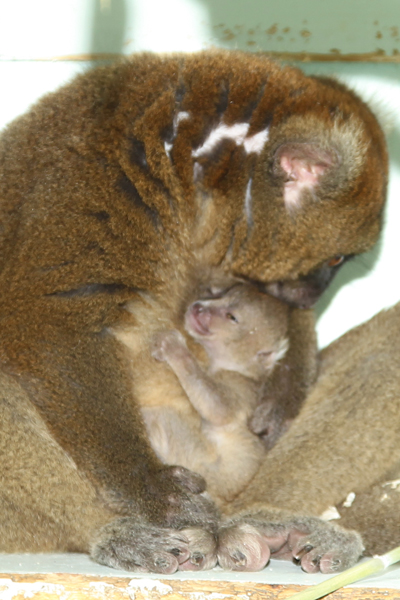 Mom and baby, which has yet to be named. Photo by: Dave Rolfe.