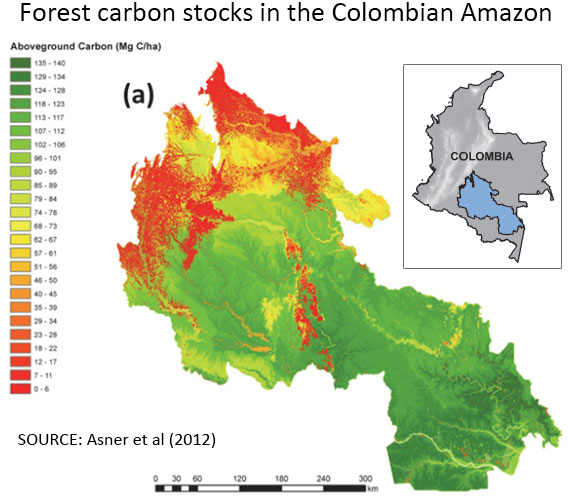 Scientists have created high-resolution carbon maps for 165,000 square kilometers (64,000 square miles) of forest across roughly 40 percent of the Colombian Amazon, greatly boosting the ability of the South American nation to measure emissions from deforestation and forest degradation, reports the Carnegie Institution for Science at Stanford University, which led the effort.

The research, which is described in the journal Biogeosciences, used a combination of satellite data and advanced airplane-based sensors to assess the carbon content of the remote region, which is about four times the size of Switzerland. On-the-ground field studies in the area are difficult due to lack of navigable rivers and security concerns.

The study area has been designated as a REDD+ pilot project area by the Colombian Institute for Hydrological, Meteorological, and Environmental Studies (IDEAM). REDD+ is a program that aims to compensate developing countries for reducing emissions from deforestation and forest degradation; worldwide such emissions accounted for 10-13 percent of greenhouse gas emissions between 2000 and 2005. For its part, Colombia hopes to capitalize on REDD+ as a means to finance conservation of its extensive forests, which generate important services for the country. 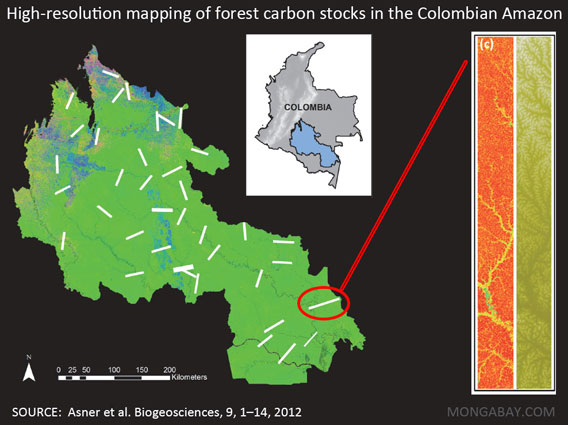 Map showing the study area and one of the transects. Click image to enlarge

The research determined that forests in the project area store 1.5 billion metric tons of carbon in their vegetation or roughly a sixth of the carbon dioxide that was emitted from fossil fuels in 2010. The results indicate the region is an important carbon sink.

But beyond the immediate findings, the study validated the carbon stock assessment approach developed by the Carnegie Institution’s Greg Asner.

“This new study not only explores a poorly known region of the Amazon, it also demonstrates our newest method for mapping forest carbon stocks at a spatial resolution approaching the size of the crown of a large individual rainforest tree,” Asner told mongabay.com. “With a revised, top-down methodology that combines the best available technologies, we and our partners achieved new accuracies that radically advance forest monitoring and carbon policy readiness in Colombia.” 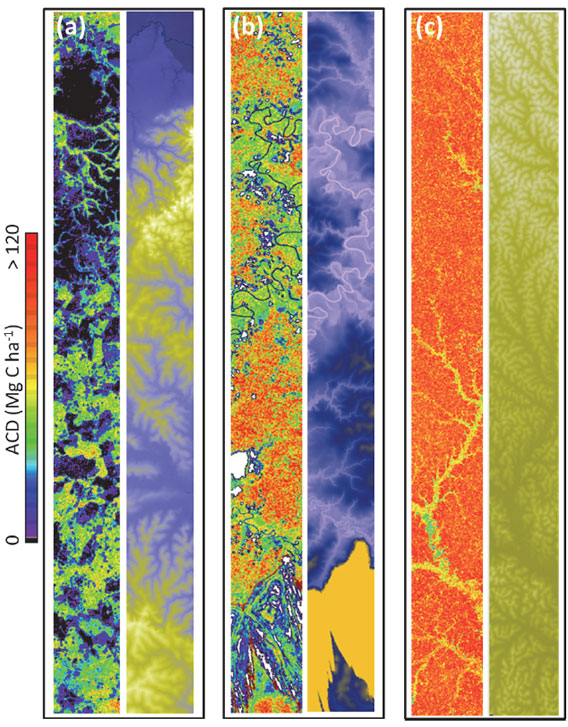 Example LiDAR-based maps of aboveground carbon density (ACD; left side) and ground elevation (right side) for (a) heavily deforested lands in the northwest region; (b) alluvial and riparian forests in the central region; and (c) terra firme forests in the southeast region of the study. Image and caption courtesy of Asner at al (2012).

Working closely with researchers and officials from Colombian institutions, Asner’s team helped build national capacity to monitor carbon stocks and deforestation with the desktop computer-based CLASlite system. The program utilizes data from various satellites including NASA’s Landsat satellite to generate highly detailed maps that reveal deforestation, logging, and other forest degradation. Traditional systems have often missed subtler forms of forest disturbance from logging and other forms of degradation, according to Asner. 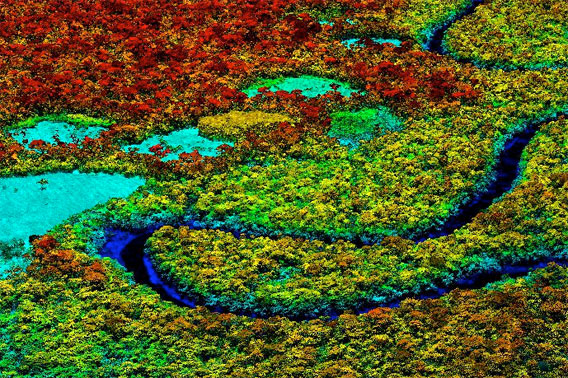 This image shows a forest area with individual trees, colored by height. The densest biomass is red, while deforested areas — with low biomass — are shades of blue. Image courtesy of the Carnegie Airborne Observatory.

The success of the project was welcomed by the President of Colombia, Juan Manuel Santos Calderón.

“I am delighted to see these research results of the Carnegie Institution and our counterpart institutions working in the Colombian Amazon. We celebrate a true collaboration that not only advances science and human knowledge, but also builds our national scientific capacity,” President Santos said in a statement. “In a continuing partnership with Carnegie we aim at becoming world leaders in the use of state-of-the-art science and technology for environmental monitoring that can inform our decision making and planning efforts for managing and protecting our precious natural resources.”

Asner said the next phase of the project will look at “[addressing] the challenges of climate change in Colombia and the western Amazon basin.” Last year, Colombia suffered some of its worst floods on record.

Asner’s team is also mapping forests in other parts of the world, including Peru, Madagascar, and Panama.