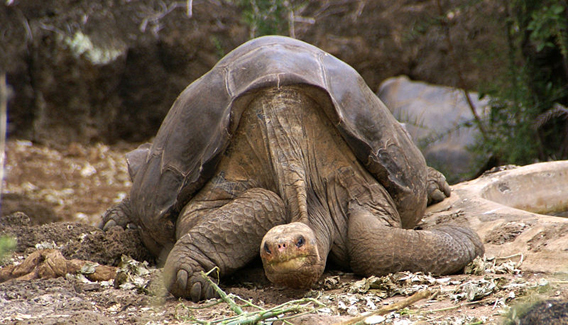 Lonesome George, the last of his kind, has passed away.

First found in 1972, Lonesome George became famous for representing the last of his kind. He was believed to be around 100—middle-aged for a Galapagos tortoise which can live to 200 years old. Staff plan to do an autopsy to determine the cause of death.

Over the decades scientists attempted to mate Lone George with other Galapagos Island tortoise subspecies, but these attempts ultimately failed. He mated with tortoises from Wolf Volcano (Chelonoidis nigra becki), but the three egg clutches produced all proved infertile. Last year he was placed with female tortoises from Espanola Island (Chelonoidis nigra hoodensis), which were found to be genetically closer to George, but no eggs were produced.

The Galapagos Islands were once home to at least 12 unique subspecies of tortoises. With the extinction of the Pinta Island tortoise, two subspecies are now gone, including the Charles Island tortoise (Chelonoidis nigra nigra) which was eaten to extinction by sailors in the 19th Century. All ten of the remaining subspecies are considered threatened by the IUCN Red List and the Galapagos tortoise species as a whole is listed as Vulnerable with around 20,000 individuals.

The massive slow-moving grazers were easy-pickings for the sailors who first visited the Galapagos Islands, including Charles Darwin who used the turtles as examples for his theory of evolution. The ships and the subsequent settlements also brought invasive species—such as rats, pigs, dogs, cats, and goats—which preyed on turtle eggs and decimated many of the islands’ ecologies. Today, conservationists are actively preserving the remaining tortoise populations and re-wilding some islands where tortoises have vanished. Still tortoises are imperiled by expanding tourism and development on the islands.

(06/24/2012) After two miscarriages and a pregnancy that lasted 15 months, Ratu, a female Sumatra rhino, has given birth to a healthy male calf, conservationists happily announced this weekend. The birth at a rhino sanctuary in Way Kambas National Park in Sumatra is the culmination of years of hard work, dedication, and the best reproductive rhino science in the world. This is the first captive birth in Indonesia, and only the fourth captive birth for the Sumatran rhino (Dicerorhinus sumatrensis) in the last hundred years. The successful birth brings new hope for one of the world’s rarest mammals: less than 200 Sumatra rhinos are thought to survive in the world.

(03/22/2012) The world’s smallest dolphin is also the closest to extinction. New Zealand government figures show that Maui’s dolphin (Cephalorhynchus hectori maui) are down to just 55 mature individuals, falling from 111 in 2005. The small cetaceans, measuring up to 1.7 meters (5.5 feet), are imperiled due to drowning in gillnets with the most recent death by a fisherman’s net occurring in January.