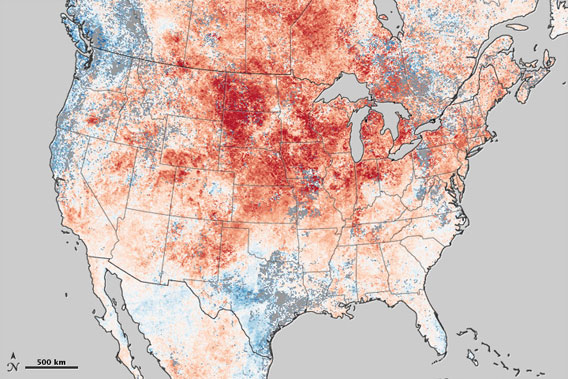 NASA map shows temperature anomalies from March 13-19, 2012 as compared to the same eight day period during the past 12 years. The map is based on data captured by the Moderate Resolution Imaging Spectroradiometer (MODIS) instrument on the Terra satellite. Click to enlarge.

Americans would not be remiss in asking, “is it getting hot in here?” According to new data from the National Oceanic and Atmospheric Administration (NOAA)’s National Climatic Data Center, the last twelve months (from May 2011 through April 2012) were the warmest on record for the lower 48 U.S. states since record keeping began in the late 19th Century.

During the last 12 months, which included the warmest March ever, temperatures ran an average of 13.16 Celsius (55.7 degrees Fahrenheit), which is 1.5 degrees Celsius (2.8 degrees Fahrenheit) warmer than the 20th Century average during the same time period. This April in the lower 48 states was the third warmest on record.

The previous warmest 12 months in the contiguous U.S. occurred from November 1999 to October 2000.

Since the U.S. comprises only around two percent of the world’s land surface, it should not be seen as a proxy for global trends. Instead global changes are undoubtedly impacting both U.S. weather and climate. Climate change due to rising greenhouse gas emissions has warmed the entire planet 0.8 degrees Celsius (1.44 degrees Fahrenheit) since the early Twentieth Century. Worldwide, the last decade was the hottest on record with 2005 and 2010 generally considered tied for the warmest year.

“With the current policies in place, the world is perfectly on track to six degrees Celsius increasing the temperature, which is very bad news. And everybody, even school children, know this will have catastrophic implications for all of us,” the chief economist with the International Energy Agency, Faith Birol, recently said.