Commentary by Fran Lambrick on 2 May 2012 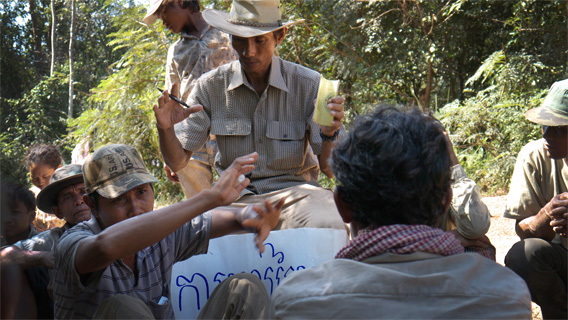 Chut Wutty, a dedicated Cambodian activist, was shot dead at an illegal logging site by military police, on Thursday. At the time Wutty was driving with two journalists, who wrote a shocking eyewitness account of his death, revealing that he was physically and verbally abused, then shot whilst trying to drive away, and left to die. His death reveals the brutal power of logging syndicates and companies, which are looting the country’s natural wealth, and employing the military to silence their opponents.

Wutty was the director of the Natural Resources Protection Group. He was the most vociferous activist speaking out against illegal logging, particularly active in the Cardamom mountains and in Prey Lang forest. He played a major role supporting the Prey Lang Network, a grassroots forest protection movement that spans four provinces.

Local authorities and officials offer little support in the fight against illegal logging. As Wutty explained, “civil servants, in their uniform, have not performed their role according to their mandate. The only role they play is facilitating business deals to make personal profit. With this they earn from more than one source. First, they get their salary from government, second, they get direct income from selling timber, and third, they make money facilitating business deals.”

“I understand that wealth is important and I want to be wealthy as well. But I also want to see people live with freedom, to be able to maintain their culture, their traditions, to be able to pursue their own life style.”

Deforestation in Cambodia is driven by a juggernaut of powerful interests. Collusion between officials, concessionaires, logging syndicates and the military creates a powerful front. The number of land concessions in Cambodia is rapidly increasing: rubber, mining and dams are major causes of large-scale deforestation. Despite losing out on valuable timber revenue from illegal logging in concession areas, the Cambodian government aims to expand rubber plantations to 400,000 hectares by 2020. Forest dependent communities face losing their land and independence, becoming poorly paid laborers in plantations owned by the wealthy.

Few activists or NGOs have the courage to voice their concerns about this widespread dispossession. Wutty was perfectly aware of the risks he was taking but he was determined to speak out. Sitting next to him as the military approached at the Prey Lang protest in November, Wutty was composed. “They are coming to catch me; should I run away? But where to go?” He looked around for a second, then mildly commented, “Well, I’d like to see what they do.”

On Thursday, Wutty’s death showed just how far those people would go in the face of his courageous and untiring dedication to stop the destruction of Cambodia’s forests. It is a triumph that he kept pursuing justice in the face of threats and violence.

The question now is, who sent the soldiers to apprehend Wutty?

The truth may not come out immediately, but a full investigation should now be launched. The Cambodian government must be pushed to control the illegal logging and land-grabbing in Cambodia, that involve an oppression and violence revealed so tragically by Wutty’s killing.

Blood rosewood: Thailand and Cambodia team up to tackle illegal logging crisis and save lives

(04/11/2012) Cambodian and Thai officials have agreed to work together to combat illegal logging of rosewood and resulting violence between Cambodian loggers and Thai rangers, reports MCOT online news. Officials with both nations met on Tuesday and spent three hours discussing the issue.

(03/19/2012) The Cambodian government has handed over nearly 20 percent of Botum Sakor National Park to a Chinese real-estate firm building a massive casino and resorts in the middle of pristine rainforest, reports Reuters. The city-sized resorts, costing $3.8 billion, will include a 64 kilometers highway, an airport, hotels, and golf courses. Botum Sakur is home to a number of endangered species including the pileated gibbon (Hylobates pileatus) and Asian elephant (Elephas maximus).

(05/31/2011) Two hundred Cambodians rallied in Phnom Penh last week to protest the widespread destruction of one of Southeast Asia’s last intact lowland rainforests, known as Prey Lang. In an effort to gain wider media attention, protestors donned dress and make-up inspired by the James Cameron film, Avatar, which depicts the destruction of a forest and its inhabitants on an alien world. The idea worked as the rally received international attention from Reuters, CNN (i-report), MSNBC, and NPR, among other media outlets.

(03/13/2011) The Cambodian Prime Minister, Hun Sen, has approved a 9,000 hectare (22,200 acre) rubber plantation in Virachey National Park despite its status as a protected area, reports the Phnom Penh Post. The park is also listed as an ASEAN Heritage Park.