Frog photos for Save the Frogs Day 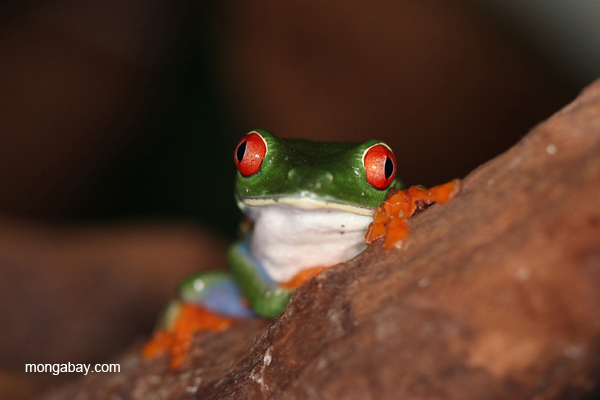 Today is Save the Frogs Day, a global event that aims to raise awareness on the plight of amphibians, which are increasingly endangered by climate change, habitat loss and degradation, pollution, invasive species, overexploitation, and the outbreak of a deadly fungal disease. In recognition of Save the Frogs Day, there are dozens of activities occurring around the world.

Save the Frogs Day was conceived by herpetologist Kerry Kriger, who now serves as the organization’s Executive Director. Kriger is leading a Save The Frogs Day 5K race in downtown Seattle on April 28th. Other Save The Frogs Day events are listed at www.savethefrogs.com/day.

“The goal of Save The Frogs Day is to get people worldwide educating their fellow citizens about the plight of amphibians and ways they can help” said Kriger in a statement. “Frogs eat mosquitoes, provide us with medical advances, serve as food for birds, fish and monkeys, and their tadpoles filter our drinking water. There are lots of reasons to save them.”

To celebrate Save The Frogs Day, here is a collection of frog photos from around the world taken by mongabay.com’s Rhett Butler.

(11/02/2011) Frogs need all the help they can get. With the IUCN Red List estimating that 41 percent of amphibians are endangered, frogs are currently the world’s most imperiled animal family. Scientists estimate that around 200 amphibian species have been lost to extinction in recent decades to habitat loss, pollution, and a devastating fungal disease. Yet as the frog emergency worsens, there have been positive movements in conservation. The most recent comes from the small West African country of Ghana. Partnering with the enthusiastic US-based organization, SAVE THE FROGS!, two Ghanaian herpetologists, Gilbert Baase Adum and Caleb Ofori, have started a sister branch in their country: SAVE THE FROGS! Ghana.

(04/26/2011) This year’s Save the Frogs Day (Friday, April 29th) is focusing on a campaign to ban the herbicide Atrazine in the US with a rally at the steps of the Environmental Protection Agency (EPA). Kerry Kriger, executive director of frog-focused NGO Save the Frogs! and creator of Save the Frogs Day, says that Atrazine is an important target in the attempt to save amphibians worldwide, which are currently facing extinction rates that are estimated at 200 times the average. “Atrazine weakens amphibians’ immune systems, and can cause hermaphroditism and complete sex reversal in male frogs at concentrations as low as 2.5 parts per billion,” Kriger told mongabay.com.

A day to celebrate (and save) the world’s amphibians: the 2nd Annual Save the Frogs Day

(04/28/2010) Friday, April 30th is for the frogs: educational programs, conservation walks with experts, frog leaping races, and the world’s first protest to save frogs are all planned for the world’s 2nd Annual Save the Frogs Day. Organized by the non-profit SAVE THE FROGS!, events are so far planned in 15 countries on every continent besides Antarctica—fittingly the only continent that lacks amphibians.

Save the frogs, save ourselves

(09/04/2009) Amphibians are going extinct around the globe. As a scientist specializing in frogs, I have watched dozens of species of these creatures die out. The extinction of frogs and salamanders might seem unimportant, but the reality couldn’t be farther from the truth. Indeed, from regulating their local ecosystems, to consuming and controlling the population of mosquitoes and other insects that spread disease, to potentially pointing the way to new drugs for fighting diseases such as cancer or HIV-AIDS, the fate of these creatures is inexorably linked to our own.

The story of ‘Save the Frogs Day’, April 28th, An Interview with Kerry Kriger

(04/26/2009) Founder and director of SAVE THE FROGS!, Dr. Kerry Kriger is responsible for the first annual Save The Frogs Day on Tuesday, April 28th with events planned worldwide from the United States to Nepal, and Australia to China. “I’m continually amazed at the positive response it’s gotten. I thought of Save The Frogs Day one night last December when I was the only full-time SAVE THE FROGS! employee and I only had a couple part-time volunteers,” Kriger explains.