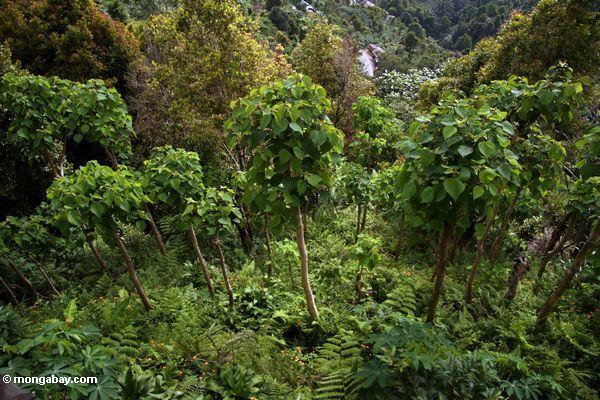 Young teak trees growing in a plantation in Sulawesi, Indonesia. Photo by: Rhett A. Butler.

Wild teak forests continue to decline, threatening genetic diversity, while commercial planted teak forests are on the rise, according to a new assessment by the Food and Agriculture Organization (FAO). Overall, teak forests have declined by 1.3 percent, or 385,000 hectares, worldwide from 1992 to 2010. Teak (Tectona grandis) is used for a variety of commercial purposes, including outdoor furniture and flooring.

Thailand has banned logging in natural forests since 1989, which the assessment says may be the reason behind its rise in teak forests.

“Supply trend points to a continuing decline in the volume and quality of natural teak, which results in progressive loss of genetic resources. This is why it is essential in the near future to plan, organize and implement a programme for the genetic conservation of native teak resources in the four countries with natural teak forests,” said Walter Kollert, FAO Forestry Officer, in a press release.

Teak has not been evaluated by the IUCN Red List.

(03/28/2012) Roughly half of the 70 percent decline in deforestation in the Brazilian Amazon between 2005 and 2009 can be attributed to policies enacted by the Brazilian government, finds an analysis published by the Climate Policy Initiative (CPI), a group funded by George Soros. The measures helped avoid 62,000 square kilometers of deforestation and 620 million tons of carbon dioxide emissions that would have otherwise occurred.

(03/22/2012) Greenpeace reiterated its call for an end to deforestation in Brazil by 2015 and globally by 2020 during its launch of an awareness-raising expedition down the Amazon River aboard the Rainbow Warrior.