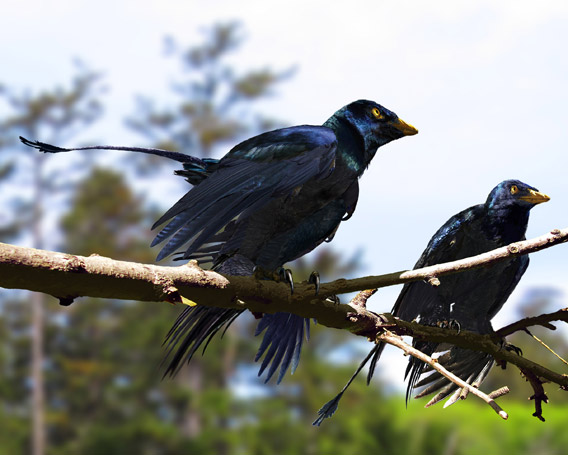 An artist’s recreation of Microraptor, a pigeon-sized, four-winged dinosaur that lived about 130 million years ago. Recent research has shown that the dinosaur had iridescent plumage. Image by: Jason Brougham/University of Texas.

The more we discover about dinosaurs, the more these “terrible lizards” resemble otherworldly birds. None more so than the microraptor, which paleontologists have meticulously reconstructed in a paper in Science. Not only was the microraptor about the size of a modern-day crow, it looked very crow-like according to paleontologists, even down to the discovery that it sported dark iridescent feathers, the first yet recorded in nature.

“This study gives us an unprecedented glimpse at what this animal looked like when it was alive,” said co-author Mark Norell, chair of the American Museum of Natural History’s Division of Paleontology, in a statement. “While we’ve nailed down what color this animal was, even more importantly, we’ve determined that Microraptor, like many modern birds, most likely used its ornate feathering to give visual social signals.”

Living around 120 million years ago, the species was first discovered in 2003 in China. It surprised scientists for what was viewed as the first “four-winged dinosaur” with feathers on both its fore and hind legs as well as a tail fan. While researchers have previously believed this plumage was related to flight, the current research team, including American and Chinese scientists, argue the magnificent tail feathers were more likely for display as is commonly seen in modern birds.

“Feather features were surely shaped by early locomotor styles. But, as any birder will tell you, feather colors and shapes may also be tied with complex behavioral repertoires and, if anything, may be costly in terms of aerodynamics,” explains Julia Clarke, one of the paper’s co-authors and an associate professor of paleontology at The University of Texas at Austin’s Jackson School of Geosciences.

Researchers have been able to determine the color of a number of dinosaurs by analyzing the shape of melanosomes—the part of a cell that contains the pigment melanin—which has different structures for different colors. Microraptor had narrow melanosomes in stacked layers, which point to toward iridescent feathers.

“Iridescence is widespread in modern birds and is frequently used in displays. Our evidence that Microraptor was largely iridescent thus suggests that feathers were important for display even relatively early in their evolution,” said Matt Shawkey, a co-author and associate professor of biology at the University of Akron.

The microraptor is in the dinosaur family of dromeosaurs, bird-like theropods that include such famous representatives as the velociraptor, all of which are believed now to be covered with feathers. The exact relationship between dromeosaurs and birds is still under debate. 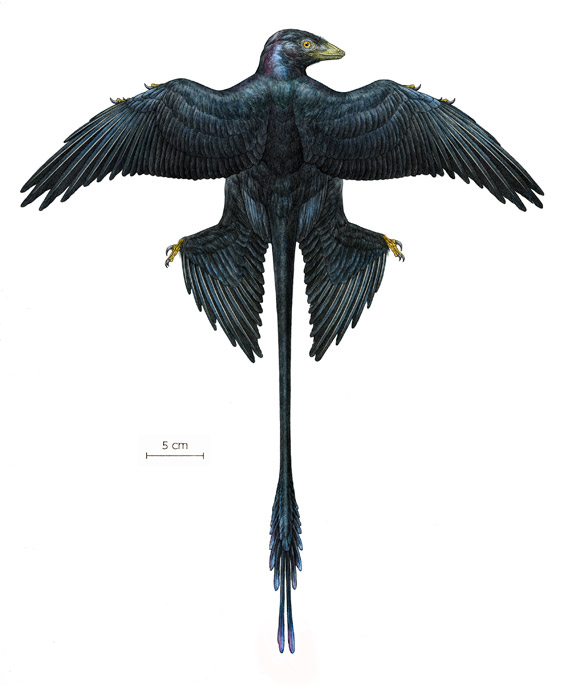 This is a reconstruction of a Microraptor based on digital overlays of nine fossilized specimens. Microraptor was a pigeon-sized, four-winged dinosaur that lived about 130 million years ago. Image by: AMNH/M. Ellison. 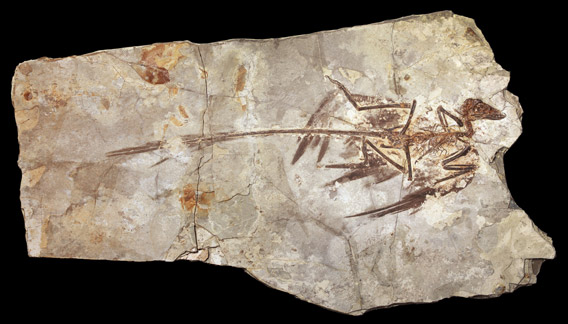 This is a fossilized Microraptor specimen from the Beijing Museum of Natural History. Photo by: AMNH/M. Ellison. 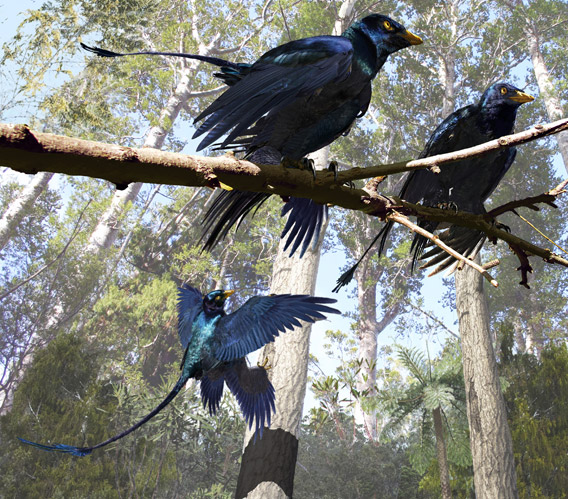 An artist’s recreation of Microraptor. Photo by: AMNH/M. Ellison.

Scientists discover giant species of crocodile; luckily it is extinct

(09/15/2011) Researchers excavating a coal mine in Colombia have discovered a previously unknown species of prehistoric crocodile. The beast is described in the September 15 issue of the journal Palaeontology.

King of dinosaurs was a hunter, not a scavenger

(01/26/2011) Ecologists say they have used a computer model to put to rest a nearly century-old debate. Did Tyrannosaurus Rex, one of the world’s most well-known dinosaurs, hunt down its prey like a lion on the plains, or, instead, did it scavenge meals from other hunters like a vulture? According to scientists with the Zoological Society of London (ZSL) the Tyrannosaurus had only one choice in order to survive: hunt.

(01/25/2011) Paleontologists working in China have discovered a first for dinosaurs: a species with only one finger. Named Linhenykus monodactylus, the extinct species stood only about two feet high and weighed about as much as a large parrot. Although small, the new dinosaur was a member of the carnivorous therapod dinosaurs, which include the infamous Tyrannosaurus Rex. The find was announced in the Proceedings of the National Academy of Sciences.