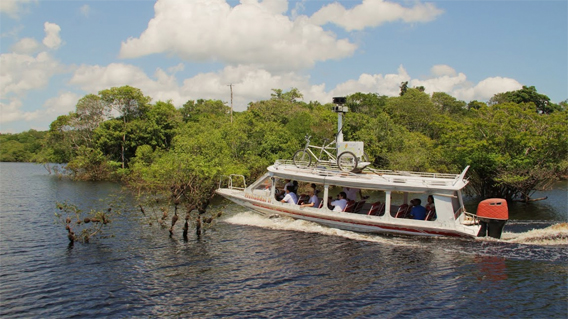 The Google Street View team in the Brazilian Amazon. Courtesy of Google.

Google has posted images of a stretch of rainforest and communities along the Amazon river on its Street View product available via Google Maps. The addition makes it possible to virtually explore communities and ecosystems in Earth’s largest tropical forest.

“Now anyone can experience the beauty and diversity of the Amazon,” wrote Karin Tuxen-Bettman, Project Lead for Google Street View in the Amazon, in a post on the Official Google Blog.

Some 50,000 still photos, collected by bicycle and boat, were used for the project which was done in partnership with the Amazonas Sustainable Foundation (FAS), an NGO that works with the government of the state of Amazonas to develop forest conservation projects that generate benefits for local communities. FAS invited Google to its project sites in an effort to highlight its work. 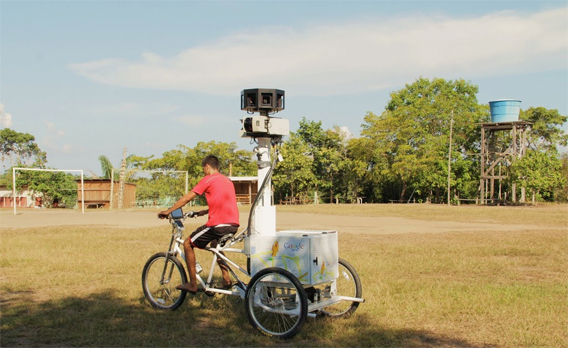 Beyond showcasing FAS, the project also provided Google an opportunity to collect imagery under conditions more challenging than an urban or suburban setting. The region’s high temperatures and humidity can stymie even the best technology.

Google has other projects to help increase understanding and awareness of forest ecosystems. The search giant has partnered with cutting-edge researchers to highlight technologies that are mapping forests and tracking deforestation. Google has further provided technical support to groups working to save rainforests in the Amazon, Indonesia, and the Congo Basin, among other places.

(03/22/2012) Google has posted images of a stretch of rainforest and communities along the Amazon river on its Street View product available via Google Maps. The addition makes it possible to virtually explore communities and ecosystems in Earth’s largest tropical forest.

Google lends its massive computing cloud in fight against deforestation

(12/03/2010) Google officially launched Earth Engine, a technology platform that enables scientists using the search giant’s massive computing infrastructure to monitor and measure environmental changes. A group of scientific partners is already using the Earth Engine to track deforestation; map vegetation, biodiversity and water resources; and analyze fire patterns, but Google will open the platform to scientists around the world.

(11/29/2010) With world leaders meeting at climate talks in Cancun to discuss the future of forests, Google has added 3D trees to the latest version of Google Earth. Google has populated several major cities with more than 80 million virtual trees based on an automated process that identifies trees in satellite images. The realistic 3D representations are based on actual tree species found in urban areas. But Google has also extended realistic tree coverage to sites in some of the world’s most biologically diverse forests.

(11/29/2009) A new handbook lays out the methodology for cultural mapping, providing indigenous groups with a powerful tool for defending their land and culture, while enabling them to benefit from some 21st century advancements. Cultural mapping may also facilitate indigenous efforts to win recognition and compensation under a proposed scheme to mitigate climate change through forest conservation. The scheme—known as REDD for reducing emissions from deforestation and degradation—will be a central topic of discussion at next month’s climate talks in Copenhagen, but concerns remain that it could fail to deliver benefits to forest dwellers.