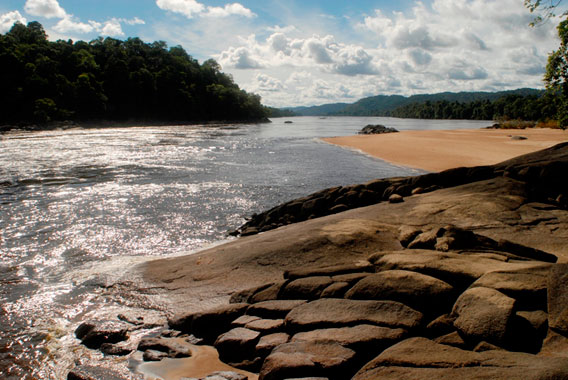 One of the planet’s most beautiful landscapes is in danger. Deep in southern Venezuela, among ancient forested tabletop mountains known as tepuis, crystalline rivers, and breathtaking waterfalls, outside influences — malaria, the high price of gold, commercial hunting, and cultural erosion — are threatening one of world’s largest remaining blocks of wilderness, one that is home to indigenous people and strikingly high levels of biological diversity.

The Caura river, which drains the Guiana Shield highlands that separate the Orinoco and Amazon River basins, is renowned for its biological and cultural richness. Characterized by lowland tropical rainforest, the Caura basin has more than 2,600 vascular plant species, 168 mammal species, 475 bird species, 34 amphibian species, 53 reptile species, and 450 species of fish. It, and the surrounding region, is also home to indigenous groups — including the Ye’kwana, Sanema and Jodi — who rely heavily upon local rivers for drinking water, food, and transportation. Until recently, modern impacts to the ecosystem and native cultures have been slight. But change is now coming fast to the Caura and it’s not necessarily for the better, says Tarek Milleron, an ecologist who runs Caura Futures, a group that aims to support local efforts to conserve the Caura River Basin ecosystem.

Unlike adjacent parts of the Amazon where the chief dangers to the forest ecosystem are conversion to industrial agriculture and cattle pasture, infrastructure projects, and fire, one of the most immediate threats to the Caura Basin is more subtle: cultural loss among the people who have traditionally served as its protector. As native populations increasingly chase the seeming promise of affluence and convenience of urban life, the knowledge of the forest ecosystem and stewardship of its resources is forgotten. For example, in some communities Ye’kwana youths today are more likely to fell, rather than climb, a palm tree for its fruit. To some, immediate ease of access outweighs the value of multiple harvests or the ecological value of standing trees.

Caura Futures is trying to change this by taking a non-conventional approach to conservation. Instead of working to set up national parks, lobbying governments, or forming alliances with the forces that are destroying forests, Caura Futures partners with local indigenous communities and provides training and tools to safeguard traditional knowledge, improve human health, and promote good ecosystem stewardship.

Working with Ye’kwana and Sanema has given Caura Futures and local organization Caura Weichojo a good understanding of the day-to-day needs of native communities. To address the tree-felling issue, for example, Caura Futures has created new enthusiasm for the traditional practice of tree-climbing by turning it into a competition. The group provides tree climbing gear and holds competitions to promote a return to sustainable fruit harvests.

At the same time Caura Futures is working to boost retention of traditional knowledge of indigenous communities by supporting local efforts to systematically record oral histories, rituals and wisdom of Ye’kwana and Sanema elders. These efforts to form a cultural library are entirely locally contained.

Caura Futures is also developing pragmatic solutions to lessen the impact of an introduced, but widely used, convenience: gasoline engines. The chief problems from engines arise from fuel, which is often spilled in transport and is a public health threat when children use their lungs to siphon it between containers. Caura Futures has distributed a simple device that cuts down on contamination and eliminates the need for children to suck fuel through a tube in order to move it.

Tarek Milleron spoke about these innovations during a November 2011 interview with mongabay.com.

AN INTERVIEW WITH TAREK MILLERON

Tarek Milleron: The Caura Basin is an uncommon example of a large tropical watershed that has somehow remained as mostly unbroken forest. It’s 45,300 square kilometers and–even though it’s a forest reserve–no significant logging has occurred there. The adjacent Paragua River holds an altogether different story. It has been hit hard by mining and incursions from outsiders for many years.

mongabay.com: What are the most important threats to the ecosystem and the indigenous people?

Milleron: Gold mining is still relatively contained, but its growth is alarming. Overfishing in the lower Caura. Bushmeat trade. We can’t feed towns and cities from these rivers and forests. Malaria is a threat, not due to huge mortality, but for the debilitating effects it has on people, families, and communities. Hollywood, Madison Avenue, and foreign—meaning non-indigenous—governance are big threats. All of these constitute a mill that pulverizes local culture.

mongabay.com: How fast is cultural loss occurring and what kind of knowledge and traditions are being lost?

Milleron: Cultural loss in the Caura is evidently rapid. There are stereotypes of indigenous people that are largely true—such as their tremendous powers of observation. But one stereotype, that they are all forest savants, is certainly untrue. A few individuals hold the deep knowledge. Those individuals are almost never under age 50 in the Caura Basin. Their knowledge can be artificially divided into rituals, natural history, medicine, agriculture and crafts.

mongabay.com: What are some of the consequences of this loss?

Milleron: I’m afraid that we know the consequences from the same cultural erosion witnessed all over the globe for many decades now. In a short time, indigenous peoples who have for generations been forest stewards are turned into peons. They end up doing the logging, mining, fishing and hunting for the asphalt and concrete folk. If they lose their own names for organisms, an indigenous conservation ethic becomes untenable. This is why we’ve put a lot of effort into documenting Sanema and Ye’kwana birds names over the last three years and we plan to expand to other taxa.

mongabay.com: Is the young generation still interested in their culture?

Milleron: Some are genuinely interested, others might tell you what you want to hear. The proof is in how much they study it, whether they learn how to sing or weave baskets or carve and shape dugouts. I was out in a new garden a couple of years ago, and these young native guys with skinny jeans and white belts had no clue how to plant—or how to work hard. But I also know young people there who know that gel in their hair shouldn’t erase what’s in their skull. Neat to see people who can bridge two worlds.

mongabay.com: Are you seeing people move to larger settlements and cities?

Milleron: More and more people are spending extended periods of time in town. There are incentives for them to do that these days.

mongabay.com: Caura Futures is developing innovative and practical approaches to addressing a wide array of environmental problems. What is the inspiration for these solutions?

Milleron: The basic inspiration comes from having lived the life out there for months at a time. I wanted to contribute back for what I was given by being allowed to do ecological research living with local people. Their struggles inspire what we do together.

For example, a few people are deeply concerned about the knowledge they are losing. We’ve helped them with the technology they need to record their culture. Then there are problems that originate in our world that we need to address, like the contamination resulting from fuel transport. Oil companies provide the gasoline, but not the containers to safely transport it. Kids start siphons with their mouths. We introduced a simple device that eliminates the need for that. And our fuel tank will hugely diminish the constant fuel spillage and leaking.

These are needs that have to be met, if we are going in with a conservation message. Same thing with detecting malaria, where we simply connected Ye’kwana students with the best Venezuelan government institute that could train them. Our palm climbing project started as a local idea—old guys didn’t like seeing the young cutting palms down.

If you want to do conservation right, listening to local peoples’ ideas is the proven path to success.

Conservation in the Caura rests on indigenous cultural practices and belief systems.

mongabay.com: Do you envision these ventures eventually become self-sustaining or will they likely continue to need outside support?

Milleron: Everything we’ve done is meant to minimize the role of outsiders and maximize local involvement. So now there is a local civic association that will take on more and more responsibility for obtaining funding for their projects. But, there are still certain technical hurdles—for example, how to serve vast quantities of recorded data—that have to be resolved with help from outside the Caura. I think that barter is good for conservation also. Global goals, like REDD can be met by cutting out inefficient cash transactions. If you ask a man from the upper Caura to stop cutting palms down, to reduce forest degradation—and you pay him in cash, that cash is hugely wasted in some long journey to town where he won’t find the solar panels he seeks anyway. Just give him the solar panels, in exchange for verifiable stewardship. That’s where I think we need to go.

Video is really interesting on a local level. Worst thing to do is to scold some guys for watching Van Damme the seventh night in a row. I can say from experience that if they have local videos—traditional wrestling, even someone felling a tree for a dugout—they are at least as interested in those. Could be a local market. But, just as we need “inside support”—good stewardship—they will need outside support from us. Getting to an even and sensible trade is the trick. We have a lot to learn and not much time.

mongabay.com: What can people outside the Caura basin do to help?

Milleron: Fund small conservation efforts in tropical South America or elsewhere where you can talk to the people doing the work. Of course we’d love it if people thought of Caura Futures. We stretch contributions a long way, and these are tough times for small non-profits, in particular. We like those relationships where people are genuinely interested in discussing the details of the work, and we are small enough that we can give concrete answers. Caura Futures pays no office rent in the U.S., thanks to one of our board members. That’s my pitch. On a more serious note, we often need technical expertise in a series of areas. It’s fun to learn all about submersible water pumps or puzzle over what best to use now that mini-disc recorders have become obsolete, but we’d rather have people who know more give us advice about such things. Donations of mini-dv cameras with mic jacks, those kinds of things are welcome as well. Or, just spread the word.