Bathtub-sized marine sponge rediscovered after a century of extinction 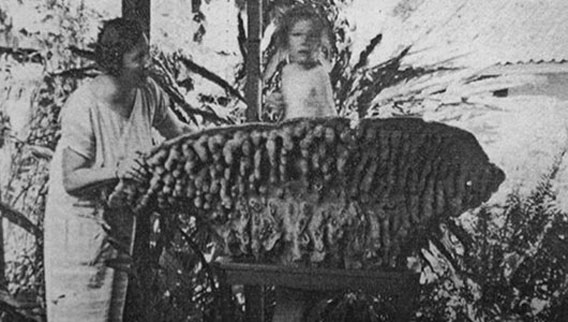 Neptune’s cup used as a bathtub for a child before overharvesting almost pushed the species to extinction.

Not found alive for over a century the evocatively named Neptune’s cup sponge (Cliona patera) has been rediscovered off the shores of Singapore. Researchers with the environmental consulting DHI Group found the species during a routine dive. Although the specimen they found was small, the goblet-shaped sponge can reach nearly 5 feet (1.5 meters) high and the same in diameter.

“When we came across the sponge, we knew immediately that this was something very different,” marine biologist Karenne Tun from DHI said in a press release.

First described in 1822, full-grown Neptune cups were used as bathtubs for children. Overharvesting for the magnificent organism, however, led to its near extinction. The sponge was last sighted in 1908 in Indonesian waters and believed to be extinct since then. However, dead Neptune’s cups were found in dredge samples from northern Australia in the 1990s, providing hope that the species was still around.

“Basically, little is known about the Neptune’s Cup, as it was never found alive,” adds Tun. “Now we have the opportunity to study the biology and ecology of this impressive sponge and learn about its life cycle. […] We’ve already had the first surprise: The Neptune’s cup was thought to be a very slow growing species. However, between our last visits in April and August, respectively, it had grown several centimeters.”

Evolving over 150 million years ago, sponges anchor themselves to the marine floor, feeding on plankton and other small marine animals as water passes through their filtering bodies. 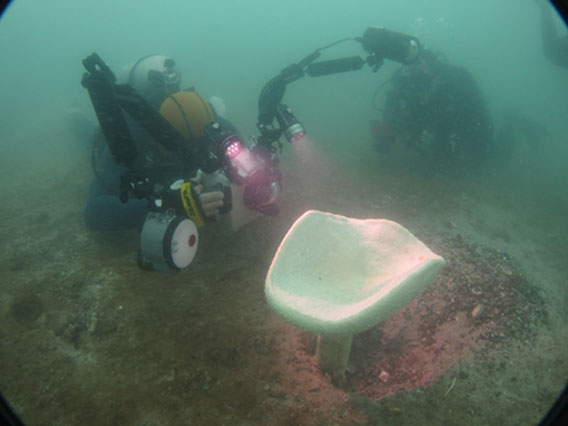 DHI and the National University of Singapore biologist taking a closer look at one of the young Neptune’s Cup sponges. Photo courtesy of DHI Group.