Old growth rainforests should be a top conservation priority when it comes to protecting wildlife, reports a new comprehensive assessment published in the journal Nature.

The research, which was led by Luke Gibson of the National University of Singapore and Tien Ming Lee of the University of California at San Diego and involved scientists from a range of international institutions, examined 138 scientific studies across 28 tropical countries. It found consistently that biodiversity level were substantially lower in disturbed forests.

“There’s no substitute for primary forests,” said Gibson in a statement. “All major forms of disturbance invariably reduce biodiversity in tropical forests.”

The research found that certain groups are more affected by forest degradation than others. Mammals seem to adapt more readily than birds and insects. The study did not assess the impact of degradation on freshwater fish, reptiles, or amphibians — groups known to be particularly sensitive to ecological change.

The findings are important because primary forests continue to fall at a rapid rate. According to the FAO, old growth forest cover declined by a minimum of 42 million hectares (162,000 square miles) — an area nearly the size of California — during the 2000s. Much of the loss was the result of selective logging, which while less damaging to biodiversity than outright conversion for agriculture, increases the vulnerability of forests to fire and future deforestation. Logging roads cut into remote forest areas typically grant access to developers, small farmers, and hunters. 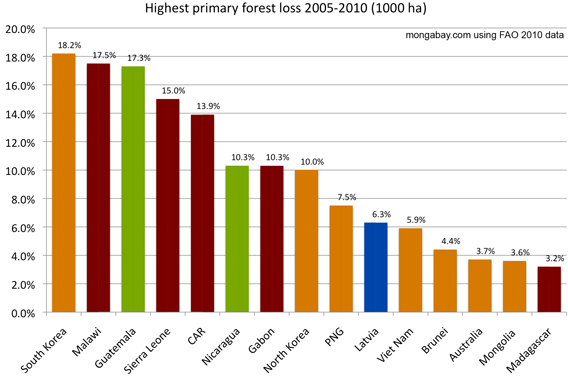 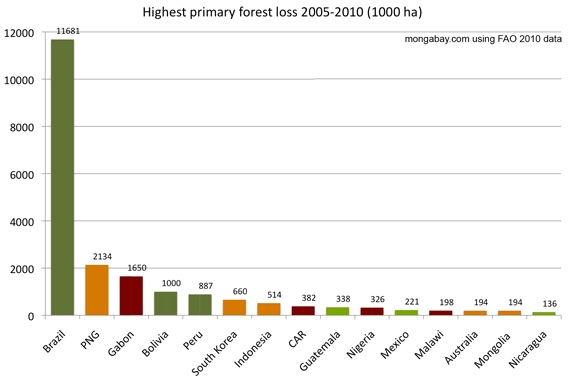 The authors nonetheless agree that selectively logged forests do have some conservation value and are worth protecting. A study published earlier this month in Conservation Letters argued the same point.

“As selective logging is rapidly expanding throughout the tropics, ecological restoration of such areas might represent an effective strategy to alleviate threats to biodiversity,” said co-author Lian Pin Koh of ETH Zurich.

But to conserve the maximum amount of biodiversity, the authors say old-growth forests should be a priority. They argue protected areas—despite their shortcomings—offer the best hope for primary forests.

“Primary forests are irreplaceable for sustaining tropical biodiversity,” the authors write. “Consequently,
we strongly urge their protection by enhancement of
enforcement in existing protected areas, expansion of the current network
of reserves and the curbing of international demand for forest
commodities obtained at the expense of primary forests.”

But to be effective, parks must be maintained. Finding the political will and funding to do so will remain a challenge, say the authors.

“A growing number of reserves are being degraded, downsized, if not entirely degazetted, so holding on to the last remaining large tracts of primary forests within existing reserves will be a crucial part of the conservation mission this century”, said co-author Carlos Peres of the University of East Anglia.

“Improving
mechanisms for delivering and sustaining the social, financial and
technical support necessary to achieve such goals continues to present
one of the greatest challenges to tropical biodiversity conservation in
the twenty-first century,” the authors conclude.

Rainforest conversion to oil palm causes 83% of wildlife to disappear

(09/15/2008) Conversion of primary rainforest to an oil palm plantation results in a loss of more than 80 percent of species, reports a new comprehensive review of the impacts of growing palm oil production. The research is published in the journal Trends in Ecology and Evolution.

In the Amazon, primary forest biodiversity tops that of secondary forest, plantations

(11/12/2007) Plantations and secondary forests are no match for primary Amazon rainforest in terms of biodiversity, reports the largest ever assessment of the biodiversity conservation value in the tropics.