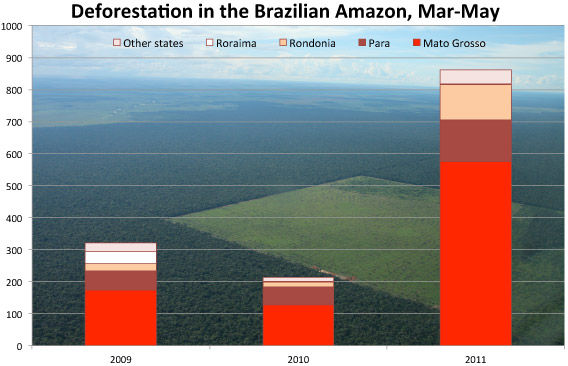 A group of prominent scientists has condemned a bill that will potentially weaken Brazil’s environmental laws.

In a resolution issued this week, the Association for Tropical Biology and Conservation (ATBC), the world’s largest scientific organization devoted to the study, protection, and sustainable use of tropical ecosystems, warned that the Forest Code reform bill which recently passed Brazil’s lower house of Congress could reverse progress in reducing deforestation and undermine the country’s standing as a global leader on environmental policy.

“The ATBC is deeply worried about the proposed changes to the Brazilian Forest Code,” said William F. Laurance, former president of ATBC and a current professor at James Cook University in Australia. “Amendments to the Code, which are moving through Brazil’s Congress, would both weaken key aspects of the Code and grant a sweeping amnesty for many of those who have illegally cleared or colonized forested lands in the past.”

“We urge Brazilian President Dilma Rousseff to veto the bill if it reaches her desk, as appears likely. The amended Code would be a serious blow to Brazil’s efforts to limit deforestation in the Amazon and elsewhere in Brazil. And by promoting forest loss and greenhouse gas emissions it could also contribute substantially to global warming.”

The resolution notes that productivity gains on the 330 million hectares of land currently occupied by rural activities could substantially boost agricultural output and income without needing to clear more native ecosystems. It highlights low productivity cattle ranching as a particularly ripe opportunity for improvement.

“Productivity gains on the 158.8 million hectares occupied by cattle, today with an inefficient mean load of only 1.1 animals per hectare, could provide ground for new agricultural areas,” the resolution states.

ATBC is therefore urging the Brazilian government “to postpone the approval of a decision regarding the amendments to the Brazilian Forest Code (1.876/99) recently passed by the National Congress until a science based assessment of the ecological impacts of the proposed modifications and their alternatives has been completed.”

Laurance adds that if the bill is approved as is, it would be “a giant step backward for Brazil” which is increasingly seen as a progressive voice on sustainable development and the environment.

Whereas, Brazil is a megadiverse country and supports globally important ecosystems, such as Amazon moist, dry and flooded forests, Atlantic Forest, Cerrado, Caatinga, Pantanal, and the Southern Campos; and

Whereas, Brazilian ecosystems provide important ecosystem services to Brazilians in particular and humanity in general, including climate and hydrological cycle regulation, carbon up—take, water provision, pollutant degradation, crop pollination, medicine, among others; and

Whereas, Brazil has established a large number of biological reserves and other conservation units and has made significant progress in reducing deforestation rates and habitat loss in the last few years; and

Whereas, enforcement of the current Brazilian Forest Code (4771/1965) has played a key role in regulating land use on private and public properties, which ensures landscape connectivity for both plant and animal populations and protects ecosystem services; and

Whereas, scientists have developed new ways to improve productivity which could be applied to Brazil’s 330 million hectares currently dedicated to agricultural and ranching activities thereby reducing the need to clear new lands;

Whereas, the occupation of new natural areas cannot be considered urgent since 329.9 million hectares (38.7% of the national territory) is already occupied by rural activities; and

Whereas, productivity gains on the 158.8 million hectares occupied by cattle, today with an inefficient mean load of only 1.1 animals per hectare, could provide ground for new agricultural areas; and

Therefore, be it resolved that the Association for Tropical Biology and Conservation, the world’s largest scientific organization devoted to the study, protection, and sustainable use of tropical ecosystems: