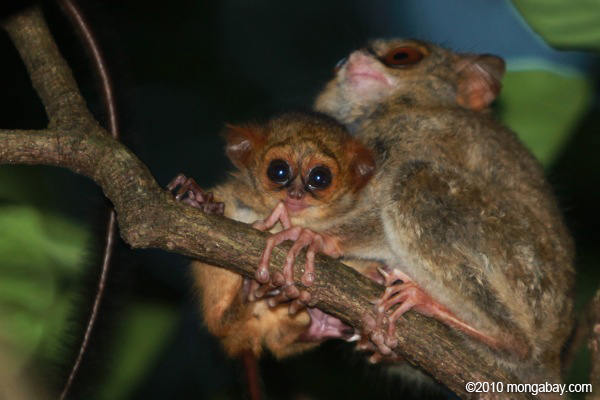 Mother and baby Tarsier in Tangkoko. Photo by Rhett Butler.

The spectral tarsier of Sulawesi is one of the world’s smallest primates, weighing roughly the equivalent ten U.S. quarters when full-grown.

Tarsiers are classified as prosimians — a group of primates that includes lemurs, bushbabies, lorises, and galagos — and are among the only fully carnivorous primates, hunting insects as night.

Tarsiers live in family groups ranging from two to six individuals, including a mated pair and offspring. Females typically give birth twice a year.

While tarsiers are found across southeast Asia, North Sulawesi is one of the best places to see them. They can be tracked by following their kiss-like calls.