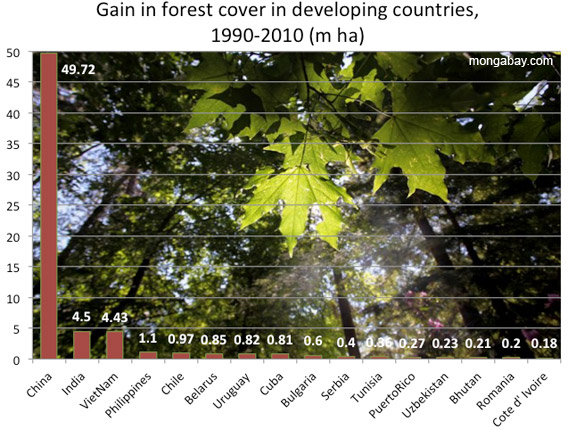 A new study says that giving local communities control over forest resources can help slow and even reverse deforestation.

The research, published by the Rights and Resources Initiative (RRI) on the eve of a forestry workshop in Lombok, Indonesia, analyzed trends in countries that have either maintained or expanded forest cover since 1990. It found several factors contributing to forest recovery: expansion of community rights over land and resource management; support for afforestation, restoration, and reforestation projects; and “opening of markets to support sustainable forest management practices.”

“The state remains the predominant actor in the region’s forests but the trend toward increased and legally recognized local control now emerging is incredibly important,” said Andy White, coordinator of RRI. “It’s no coincidence that the countries granting more rights to communities and indigenous groups are the same ones making progress toward more sustainable management of their forest resources.”

The RRI study, titled The Greener Side of REDD+: Lessons for REDD+ from Countries where Forest Area is Increasing, seems to confirm previous research suggesting that forest communities — provided they are accorded rights over land and resources — are better stewards of forests than governments. The findings have implications for the REDD+ mechanism, which aims to compensate developing countries for reducing greenhouse gas emissions from deforestation and forest degradation.

“With so much attention on the REDD+ process as the primary vehicle for forest policy reform, we wanted to explore other ways countries are actively working to stabilize and expand their forest landscape,” said study co-author Hosny El Lakany, a professor of forestry at the University of British Colombia, in a statement. “Many countries are successfully rehabilitating degraded lands and pursuing policies that encourage a more sustainable approach to managing their forested areas. Investing in these proven solutions is a way to complement or perhaps serve as a back up for the REDD+ process, which remains filled with uncertainties.” 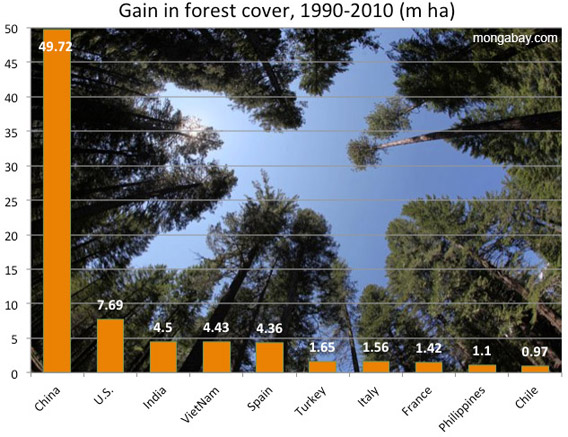 The study identifies three countries where recent land tenure reform has the potential to pay similar dividends: Nepal, Thailand, and Cambodia. But it also notes a glaring exception: Indonesia.

“Between 2002 and 2008, government data showed that Indonesia increased its hold on forestland while reducing the size of forestland reserved for communities and indigenous peoples,” said RRI in a statement.

The report was nonetheless hopeful about more recent developments in Indonesia.

“There are encouraging signs that Indonesia is ready to change its focus. In the past few years the government has taken an active role in improving its efforts to mitigate climate change and improve its policy and legal framework to recognize community and indigenous ownership,” it said.

Overall the report says a mix of market-based mechanisms, regulation, and public-sector reforms can help turn the tide against deforestation.

“Stabilizing and reversing the decline in tropical forests requires a number of things to occur simultaneously,” White said. “But our analysis shows that governments have to fundamentally view their forests as an endowment that offers multiple benefits that must be shared broadly. If they look at forests as obstacles to development or sources of personal wealth, then they are headed down a road to ruin.”

(02/09/2011) Progress over the past 25 years in recognizing indigenous peoples’ rights to land and resources has been interrupted by a worldwide commodity boom, argues a new report published by the Rights and Resources Initiative (RRI). The report says that surging food and energy prices—and associated appreciation of land values—have led some governments to pause on land tenure reform, and in some cases, rollback hard-won rights. The report cites instances in Asia, Africa, and South America where large blocks of land traditionally used by local people have been sold or leased to industrial interests. In a conversation with mongabay.com, Andy White, coordinator of RRI, discussed the new report and broader rights issues.

(02/09/2011) Rising food, energy, and mineral prices, coupled with new interest in forests for their carbon-storing capacity, are driving a global land grab that threatens the rights of hundreds of millions of people living in and around tropical forests, argues a new report published by the Rights and Resources Initiative (RRI).