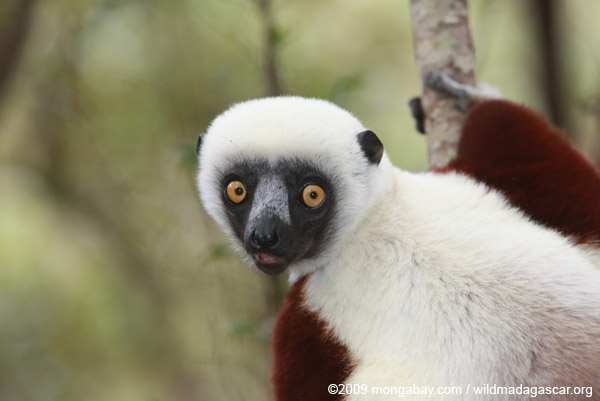 The World Bank has approved a $52 million loan to bolster conservation efforts in Madagascar, which have suffered from a collapse in funding and governance in the aftermath of a 2009 military coup, reports Reuters.

The loan will fund “conservation, community development, and ecotourism activities” over the next three years across 30 national parks and three newly protected areas managed by Madagascar National Parks, the country’s independent parks management authority. Money will be used for surveillance and control activities in the protected areas as well as poverty-alleviation initiatives in areas surrounding parks.

“Conservation costs money and our support will help protect the island’s unique flora and fauna, both now and in the future,” said Jamal Saghir, World Bank Director for Sustainable Development in Africa, in a statement. “It is important to note that this additional financing was approved as an exception on environmental and humanitarian grounds given the global significance of Madagascar’s biodiversity and the needs of the communities living near the parks”

The World Bank said the aim of the loan is to help Madagascar National Parks become less dependent on foreign aid.

“By improving the livelihoods of people living near the parks, we also improve the sustainability of the parks and help ensure the protection of the plant and animal species living in them,”

“The financing will also be used to set up mechanisms to ensure that, in the future, Madagascar’s national parks become more independent in managing costs and less reliant on external aid,” said Jean-Christophe Carret, Senior Environmental Economist, Madagascar Country Office. “Increased support to the Foundation for Protected Areas and Biodiversity, as well as for tourism development and carbon finance, are key to financial independence.”

The World Bank said the loan did not represent reëngagement with the government of Madagascar, which is run by the faction that launched the 2009 coup against the democratically-elected president.

“This does not signal the World Bank’s reengagement with Madagascar, but signals our recognition that the environmental and social costs of inaction are just too high,” said Saghir.

Madagascar’s world-famous biodiversity was hit hard by the chaos that followed the 2009 coup. Parks in the northeastern parts of the island were ransacked by a “logging mafia”, fires spiked, and lemurs were poached for a commercial bushmeat trade. The carnage has slow this year due to increased vigilance by environmental authorities and continued pressure from international conservation organizations.

Madagascar is best known for its incredible biodiversity, roughly 70 percent of which is found nowhere else. Lemurs are its most famous residents, but the island is home to a staggering array of unusual creatures, including hedgehog-like tenrecs; the fossa, an endemic predator; colorful chameleons and bizarre geckos; and hundreds of species of frogs. Its wildlife makes Madagascar a top destination for wildlife enthusiasts and ecotourists.

Government cracks down on illegal logging in Madagascar

(06/02/2011) Authorities in Madagascar seized roughly a thousand logs during an ongoing operation in the northeastern part of the country, which has been besieged by illegal logging, reports l’Express de Madagascar. Seven people were arrested.

(01/10/2011) The number of fires burning in and around forests in the northeastern part of Madagascar increased during the 2010 burning season relative the the year before, according to analysis of NASA data by WildMadagascar.org / Mongabay.com. The rise in burning corresponds to an especially dry year and continued illegal logging of the region’s biologically-rich rainforests.

Despite pledge to crack down, illegal logging continues in Madagascar’s rainforest parks

(09/06/2010) Despite government assurances that it would crack down on the rosewood trade, illegal logging continues in Madagascar’s rainforest parks, according to new information provided by sources on the ground.

The illegal logging cycle in Madagascar

(06/23/2010) The latest issue of the journal Madagascar Conservation & Development provides a comprehensive look into Madagascar’s illegal logging trade, which has generated more than $200 million for a small group of individuals over the past year. The trade, which spikes just prior to national elections and may be a source of funds for ruling politicians, has taken a heavy toll on the lowland rainforests of Madagascar, with targeted species now at risk of extinction.