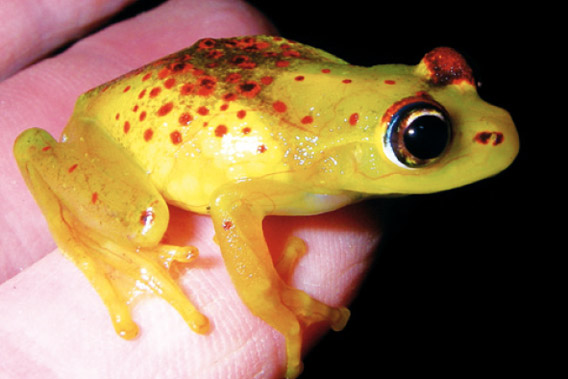 Boophis bottae. The new frog species, Boophis bottae, occurs in the eastern rainforest belt of Madagascar from Andasibe south to Ranomafana, at 800-1,000m above sea level. This endemic species is already threatened by habitat loss and is declining due to destruction of its forest habitat due to subsistence agriculture, timber extraction, charcoal manufacture, invasive spread of eucalyptus, livestock
grazing, and expanding human settlements. The species is one of 69 amphibians discovered over the last 11 years. Photo © Axel Strauß, caption courtesy of WWF.

More than 600 species of plants and animals have been described in Madagascar over the past decade, reiterating the position of Indian Ocean island as one of the world’s top biodiversity hotspots, says a new report issued today by WWF.

“This report shows once again how unique and irreplaceable the different ecosystems in Madagascar hosting all these different species are,” said Nanie Ratsifandrihamanana, WWF Madagascar’s Conservation Director, in a statement.

Over the past decade Madagascar made great strides protecting its ecosystems, but progress has reserved in recent years, especially since a 2009 military coup, which led to a collapse in governance and institutions that work to protect the island’s ecosystems. In the ensuring chaos, Madagascar’s rainforest parks — especially in the northeastern parts of the island — were pillaged for precious hardwoods. Logging was accompanied by a rise in a commercial bushmeat trade.

The turmoil took a heavy toll. Madagascar’s booming ecotourism market stalled and the country’s rate of primary forest loss surged by more than a third. Funding disappeared for conservation groups working in the country.

Over the past year the situation has started to improve in Madagascar. While NGOs in Madagascar are still struggling to secure funds since most governments do not recognize the authority that seized power during the coup, the Ministry of Environment has led a series of raids against illegal timber traders and is pushing to prosecute traffickers. Meanwhile 27 conservation groups in Madagascar have formed an alliance to pressure the acting government on environmental issues. There are signs that illegal logging in protected areas has slowed since last year.

The new report comes under WWF’s appeal to raise money for its conservation programs in Madagascar.

“These spectacular new species show what’s at stake in Madagascar and what can be lost if we don’t save it,” said Ratsifandrihamanana.

(02/24/2011) The rich and unique biodiversity of Madagascar has a new member: a forest dwelling bird in the rail family, dubbed Mentocrex beankaensis. In 2009 US and Malaygasy scientists conducted a survey in Madagascar’s dry Beanka Forest. They discovered several new species, of which the new rail is the first to be described.

(12/15/2010) Researchers have discovered a new species of lemur in Madagascar.

(10/10/2010) Researchers have identified a previously unknown species of carnivore lurking in one of the world’s most endangered lakes. Durrell’s vontsira (Salanoia durrelli), named in honor of the late conservationist and writer Gerald Durrell, was first photographed swimming in Madagascar’s Lake Alaotra in 2004. Subsequent surveys by scientists at the the Durrell Wildlife Conservation Trust, the Natural History Museum, London, Nature Heritage, Jersey, and Conservation International confirmed the mongoose-like creature was indeed a new species.

(09/20/2010) A newly discovered species of spider in Madagascar spins the world’s longest web, report scientists writing in the Journal of
Arachnology and PLoS ONE.

(08/31/2010) Scientists have discovered a new species of chameleon in a small block of rainforest in Madagascar.

(04/09/2010) A species of lemur has been rediscovered more than a century after it was last spotted, report researchers from McGill University, the German Primate Centre in Göttingen Germany, the University of Antananarivo in Madagascar, and the University of Massachusetts.

(04/06/2010) Call them survivors: blindsnakes have been identified as one of the few groups of organisms that inhabited Madagascar when it broke from the Indian subcontinent around 100 million years ago. According to a new study in Biology Letters, blindsnakes not only survived the split of Madagascar and India, but likely traveled from Asia to Australia and Africa to South America on floating vegetation, the latter a journey that may have taken six months of drifting on ocean currents. “Blindsnakes are not very pretty, are rarely noticed, and are often mistaken for earthworms,” says Blair Hedges of her subjects. “Nonetheless, they tell a very interesting evolutionary story.”

Photos: Madagascar’s wonderful and wild frogs, an interview with Sahonagasy

(03/03/2010) To save Madagascar’s embattled and beautiful amphibians, scientists are turning to the web. A new site built by herpetologists, Sahonagasy, is dedicated to gathering and providing information about Madagascar’s unique amphibians in a bid to save them from the growing threat of extinction. “The past 20 years have seen resources wasted because of a poor coordination of efforts,” explains Miguel Vences, herpetologist and professor at the Technical University of Braunschweig. “Many surveys and reports have been produced that were never published, many tourists found and photographed amphibians but these photos were not made available to mapping projects, many studies carried out by Malagasy students did not make use of literature because it was not available.”

(08/27/2009) The Madagascar pochard, the world’s rarest duck, was already thought to be extinct once. After a last sighting in 1991 the species was thought to have vanished until nine adults and four hatchlings were discovered in 2006. However, conservationists have begun to fear that the species will never recover after a survey this year found only six females.

(07/14/2008) Researchers have discovered a previously unknown species of mouse lemur on the island of Madagascar. The find brings the global number of mouse lemurs to 16.