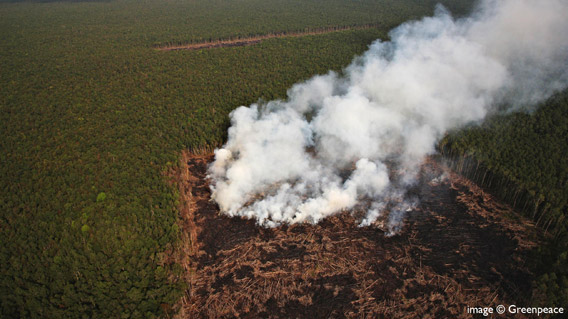 Smoke from fires set in a concession operated by PT Riau Andalan Pulp and Paper in Giam Siak Kecil area to clear land for palm oil plantations. Photo by Greenpeace

Indonesia’s Ministry of Forestry is already undermining the moratorium on new forestry concessions on peatlands and in primary forest areas, alleges a new report from Greenomics-Indonesia.

The report, The Toothless Moratorium [PDF], claims that a new decree from the Ministry of Forestry converts 81,490 hectares of forest protected under the moratorium into logging areas. The area affected is larger than Singapore.

“The 81,000 hectares were marked on the Indicative Moratorium Map as primary forest but the new decree changes the function to production forest,” Elfian Efffendi, Greenomics Indonesia Director, told mongabay.com. The areas affected included the national parks of Tanjung Puting and Sebangau.

“Changing the function from conservation areas and protection forests to production forest means that it will be logged legally,” he said. “Once logged, any primary forest will become secondary forest, and then can be potentially converted to plantation.”


Indonesian government sources reached by mongabay.com were unable or unwilling to comment on the report from Greenomics. One said the maps for the new decree [Forestry Minister Decree No. SK.292/Menhut-II/2011] are not yet public.

However one analyst said the development could reflect the power struggle between the Ministry of Forestry, which has long controlled the lucrative concession allocation business, and the new REDD+ Task-force set up by Susilo Bambang Yudhoyono.

“The actions reported are totally within realm of possibility, so in principle should not be a surprise,” said the analyst, who spoke on the condition of anonymity. “For now, the good guys lost the Moratorium battle, but it’s the first of many battles still to come, something which both sides know and are no doubt planning for already. So from a Ministry of Forestry point of view, in order to erode power of the other side further, it makes sense to assert their ‘autonomy’ as much as possible, not only in producing such a weak map as they did, but also in making clear that they too will ignore it when necessary for business or whatever narrow agenda motivates them.”

“My guess would be this type of behavior will continue over the coming months until either the government or judiciary is forced to take a stand or the opposition (especially the public and possibly Norway) is so demoralized by continuation of business-as-usual practices that battered credibility of REDD (a threat to the Ministry of Forestry due to reforms it will require) is damaged further and to the point of no return (that would seem to be is the ultimate Ministry of Forestry goal).”

The two-year moratorium is part of Indonesia’s commitment to reduce emissions from deforestation and peatlands degradation under a $1 billion REDD+ agreement with Norway. Central Kalimantan, the province in Borneo where the 81,490 ha of conservation areas and protection forests to were allegedly converted to production forest, is the pilot province for Indonesia’s REDD+ program.

Deforestation and peatlands degradation account for more than three-quarters of Indonesia’s greenhouse gas emissions, according to the Indonesian government.

(06/27/2011) A raft of new studies show that protecting Southeast Asia’s forests could provide an enormous economic lift for Southeast Asia. Indeed, the studies suggest, forest conservation, sustainable forestry, and agricultural improvements, along with investments in clean energy, could spur the rise of regional “Green Tiger” economies whose development levels surpass even those achieved during the boom years of the 1990’s. The studies provide a striking rebuttal to palm oil and timber industries’ claims that deforestation is necessary for the region’s growth.