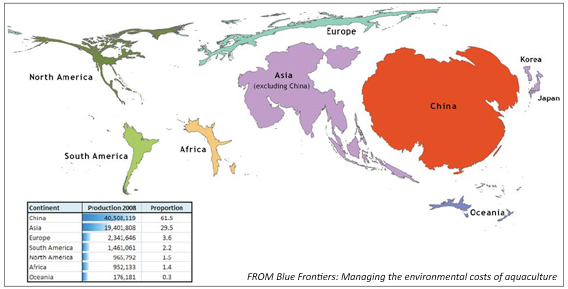 Aquaculture is the best way to meet future demand for seafood, which is expected to rise significantly by 2030 due expanding middle class populations in China, India, and Southeast Asia expand, argues a new report.

Blue Frontiers: Managing the environmental costs of aquaculture, produced by Conservation International and WorldFish, says that while aquaculture has less of an ecological impact than livestock production and wild sea-catch, gains in industry efficiency are needed to ensure both environmental quality and global food security.

“There are a number of well-founded concerns about aquaculture, in terms of its impacts on marine ecosystems and wild fisheries. But with global fisheries reaching alarming and unprecedented levels of depletion, fish cultivation versus wild fish capture has to be considered,” said Dr. Sebastian Troëng, Vice-President for Marine Conservation with Conservation International, in a statement. “We believe that intensified investment in innovation and the sharing of best practices will help us meet the growing demand while not putting unacceptable strain on coastal and freshwater environments.”

The report concludes that farmed seafood will provide a primary source of protein for urban populations in the developing world in coming decades. Aquaculture is one of the fastest growing food production sectors worldwide, with the $100 billion dollar industry already producing more than half of all seafood consumed.

Sustainably farmed seafood is significantly more environmentally friendly than beef or pork, according to the report. Per-unit weight, aquaculture is responsible for fewer emissions of nitrogen and phosphorus than beef and pork. Farming fish is also more efficient because they convert a higher percentage of their food to consumable protein than cattle or pigs.

However, an ecologically sustainable aquaculture industry is needed to meet future demands for a crucial source of animal protein for millions of people. The report found that the environmental impact of aquaculture ranges from minimal to damaging depending on the country and region of production, the aquaculture system, and the species farmed. For example, aquaculture has been a major cause behind mangrove loss worldwide, with 20 percent of the world’s mangroves disappearing since 1980. Mangroves serve as important fish nurseries, store tremendous amounts of carbon, and buffer local communities from storms and rising sea levels.

China alone accounts for 64 percent of cultivated seafood worldwide, and Asia provides 91 percent of global supply. Unfortunately, cultivation of seafood with the highest environmental impact—eel, salmon, shrimp, and prawn—is least efficient in Asia, particularly in China. Aquaculture production is most efficient in Europe, Canada, and Chile in terms of acidification, greenhouse gas emissions, energy, and land use. WordFish and Conservation International urge the open exchange of best practices in the industry and the production of mussels, oysters, mollusks, and seaweed, which are at the bottom of the food chain and have the least environmental impact.

“With governments in the region looking to aquaculture to meet demand for animal protein, we need to better understand the environmental costs of expanding aquaculture. This report will be tremendously helpful in show us which species and production systems we should favor to keep environmental costs down,” says Ketut Putra, Conservation International’s executive director.