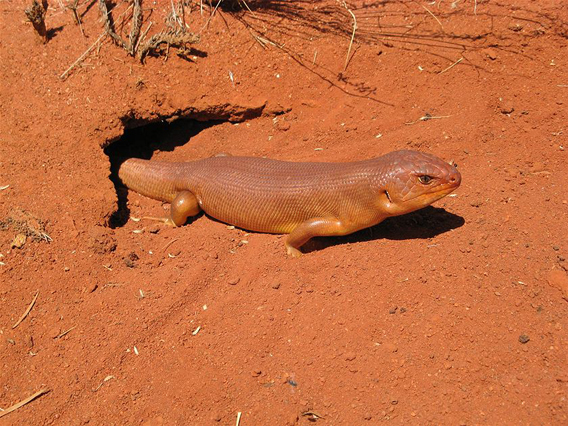 A great desert skinks popping out of its burrow. Photo by: Adam Stow, Macquarie University.

Researchers from Macquarie University in Australia have discovered that the threatened great desert burrowing skink lizard forms stable families that construct and maintain elaborate underground homes, reports ABC News. This is the first lizard in the world known to practice such familial behavior.

Native to central Australia, researchers are conducting studies on the great desert skink (Liopholis kintorei) at Uluru Kata-Tjuta National Park, where rangers monitor the threatened species. Over 5,000 species of lizard have been documented globally, but only the Uluru skinks live together in immediate and social families that invest in the construction of long-lasting homes.

Adult Uluru skinks pair for consecutive years and may raise several generations in a single burrow constructed by the parents. Not unlike humans, multiple generations of skinks live in the shared home, with parents and children contributing to the maintenance and expansion of their home. The burrows are up to thirteen meters in length, have twenty entrances, and contain designated latrines. Researcher found that skink families inhabited them for up to 7 years straight.

DNA testing of Uluru skinks reveals that young lizards sharing the same burrow are nearly all full siblings, who delay leaving the burrow to care for the family home.
According to Macquarie University researcher Dr. Adam Stow this cooperative living arrangement is remarkable for lizards: “It’s an unusual case of parental care and also having the siblings cooperate [that] make[s] them possibly the word’s most social lizard.”

The DNA results also confirm local knowledge of the lizard from the Anango Aboriginal people. They told researchers that Uluru skink males dig elaborate burrows, leave to find steady mates, then return to the burrow to raise cooperative and social families. The family continues to improve the homestead to benefit younger siblings, and parents largely remain faithful.

“For adults to invest so much in a home within which kids mature, it makes evolutionary sense that these adult individuals are sure that they are providing for their own offspring,” Stow explains.

Researchers are not done with this unusual species, as they believe the great desert skink will continue to provide insight into the evolution of family groups. In research that may hold relevance for the human species, scientists are identifying skink siblings who fail to take responsibility for home tasks in order to understand how other family members manage their lazy relatives.

(11/03/2010) Researchers have discovered a biological shocker: female boa constrictors are capable of giving birth asexually. But the surprise doesn’t end there. The study in Biology Letters found that boa babies produced through this asexual reproduction—also known as parthenogenesis—sport a chromosomal oddity that researchers thought was impossible in reptiles.

Saltwater crocodiles surf across the ocean

(06/06/2010) Despite being poor swimmers, researchers have discovered that the saltwater crocodile (also known as estuarine) commonly travels long distances over open oceans by riding ocean currents. The discovery, published inJournal of Animal Ecology, solves an unknown mystery of why saltwater crocodiles (Crocodylus porosus) are found across vast distance in the Pacific, yet have not diverged into different species.

(05/13/2010) Lizards have evolved a variety of methods to escape predators: some will drop their tail if caught, many have coloring and patterning that blends in with their environment, a few have the ability to change their colors as their background changes, while a lot of them depend on bursts of speed to skitter away, but how does a lizard escape climate change? According to a new study in Science they don’t. The study finds that lizards are suffering local extinctions worldwide due exclusively to warmer temperatures. The researchers conclude that climate change could push 20 percent of the world’s lizards to extinction within 70 years.