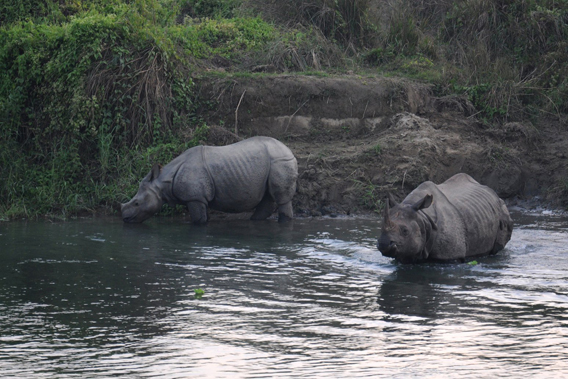 Good news for rhinos is rare recently, but a new census shows that Nepal’s one-horned rhino (Rhinoceros unicornis) population has increased by 23% since 2008 even in the face of poaching. In total 534 rhinos survive in Nepal, a rise of 99 individuals from 3 years ago.

Chitwan National Park contains Nepal’s greatest population of rhinos with 503 in total. In the past three years, Chitwan has lost 60 rhinos to poachers. Rhino are shot or sedated and their horns sawed off, often while still alive. They usually bleed to death. Ground-up, the horns are used in Chinese traditional medicine, even though scientific studies have found no medicinal properties in the horns which are largely made of keratin.

According to officials, improved protection against poachers and community programs are helping rhinos in Nepal.

“Working closely with the community to set up buffer zones has helped in our conservation,” Maheswor Dhakal, an ecologist with Nepal’s Department of National Parks and Wildlife Conservation, told the Associated Press.

The rise in rhino populations “is an indication of the successful conservation efforts of the Government of Nepal in partnership with conservation partners and WWF Nepal is very pleased to see our investment being paid off,” says Anil Manandhar from WWF Nepal. “Even though the current census shows the rise in rhino number we cannot be complacent and therefore continuous efforts from all sectors is essential.”

The one-horned rhino, also known as the Indian rhinoceros, is listed as Vulnerable by the IUCN Red List. It is largely threatened by poaching, although habitat degradation also plays a role.

Currently four of the world’s five rhino species are threatened with extinction, three of these species are considered Critically Endangered. There are less than 50 adult Java rhinos in the world and less than 250 adult Sumatran rhinos. 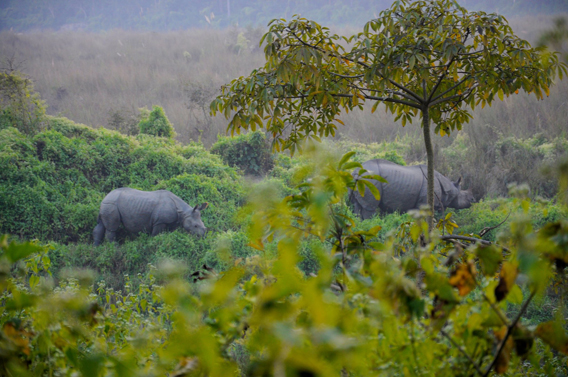 (04/11/2011) Using genetic data and re-assessing physical evidence, scientists write that they have uncovered a new species of rhino, long considered by biologists as merely a subspecies. Researchers write in an open access PLoS ONE paper published last year that evidence has shown the northern white rhino is in fact a distinct species from the more commonly known—and far more common—southern white rhino. If the scientific community accepts the paper’s argument it could impact northern white rhino conservation, as the species would overnight become the world’s most endangered rhino species with likely less than ten surviving.

(02/28/2011) There may only be 40 left in the world, but intimate footage of Javan rhino mothers and calves have been captured by video-camera trap in Ujung Kulon National Park, the last stand of one of the world’s most threatened mammals. Captured by World Wildlife Fund (WWF) and Indonesia’s Park Authority, the videos prove the Javan rhinos are, in fact, breeding. “The videos are great news for Javan rhinos,” said Dr. Eric Dinerstein chief scientist at WWF, adding that “there are no Javan rhinos in captivity—if we lose the population in the wild, we’ve lost them all.”