2010 the second hottest year on record through May

The first five months of 2010 have been the second warmest on record, according to data released by the University of Alabama Huntsville.

Scientists at the university’s Earth System Science Center report that the global composite temperature for January 1 through May 31 was 0.59 degrees Celsius (1.06 degrees Fahrenheit) above the 20-year average, trailing only 1998, which was 0.65 degrees Celsius warmer than normal at this point in the year.

Dr. John Christy, professor of atmospheric science and director of the Earth System Science Center at The University of Alabama in Huntsville, said that 2010 will likely end cooler than 1998 because el Niño, which periodically boosts global temperatures, is fading.

Recent data has shown the 2000s was the warmest decade on record. 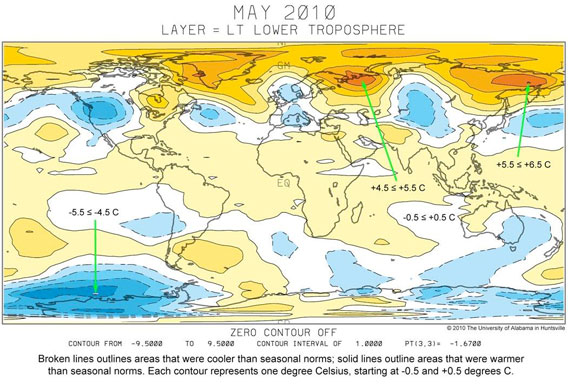