We all know that frightening experiences give us powerful memories. Now, researchers at the University of Calgary have demonstrated that an invertebrate is also capable of learning from fear. They published their findings in The Journal of Experimental Biology earlier this month.

Working with closely related Canadian and Dutch pond snails, the researchers tested their reactions to adverse stimuli by tapping their breathing tubes, or pneumostomes, whenever the snails dared stick them out for a supplemental whiff of oxygen (snails normally breathe through their skin). When returned to the “dangerous” environment in which they were tapped, the snails were observed to keep their pneumostomes retracted substantially longer than snails presented with an environment in which they weren’t tapped.

Reactions to both native and unknown predators were also tested. Crayfish are the major predator of Canadian pond snails, whereas Dutch pond snails are preyed upon by salamanders. Researchers first tested reactions to native predators by placing Canadian snails in water from tanks of crayfish and Dutch snails in water from tanks containing salamanders, after which they were tapped. Both species exhibited pneumostome-retraction times longer than 24 hours, meaning that a lasting memory had been formed. However, when Dutch snails were exposed to the scent of crayfish and Canadian snails to the scent of salamanders, predators neither species had “smelled” before, their reactions weren’t nearly as strong as with their own predator. In fact, when the key neuron containing the memory was tested for activity, they found that the memory was completely gone.

It is still unclear whether or not the capability of snails to form strong memories when confronted by a predator is due to the fact that they’ve learned from individual experience or that evolutionary pressures have led them all to react instinctively to that specific predator. Further research must be conducted. What has been demonstrated by this study is that it is possible for snails to form experience-based memories which, until recently, had been thought possible only by vertebrates.

Not only do fish feel pain, it changes their behavior

(05/06/2009) Just months after a study made a splash in the media that proved crabs experience pain, a new study of goldfish shows that not only do these fish also feel pain, but it changes their future behavior. Published in Applied Animal Behaviour Science the study tested goldfish by slowly raising the temperature in their tank. In the warming tank, researchers administered one group of fish morphine and the other saline.

Crabs feel pain, and remember it too

(03/30/2009) Research from Queen’s University Belfast has raised new issues about the culinary arts. Long-thought by cooks and diners to be insensible to pain, a new study published in the journal Animal Behvaiour shows that crabs not only feel pain but remember it well-enough after the sensation has passed to affect their future decisions. According to Dr. Bob Elwood, who headed up the research, the study should bring about changes in how crustaceans like crabs are treated by the fishing and food industries.

The honeybee can count 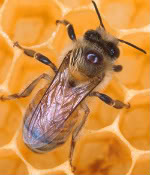 (01/29/2009) Plato once said: “numbers are the highest degree of knowledge: it is knowledge itself.” By Plato’s standards researchers have just discovered that the honey bee is a knowledgeable insect indeed. The honey bee can count to three in an instant according to a new study in the online journal PLoS ONE. Using dots and other abstract symbols, scientists from the Vision Centre in Australia tested whether the honey bees had the ability to count items in their environment.