A ruptured oil pipeline caused 14,000 barrels of crude to spill into a river in the Napo region in northeast Ecuador, an area known for its high biological diversity, reports Reuters.

The environmental impacts of the spill were not immediately apparent but scientist Douglas Beltman told Reuters that “the river was completely covered with oil from bank to bank…. it looked like a bad spill.” 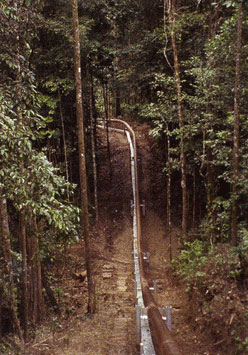 At least 35 multinational oil and gas companies operate the 180 blocks that cover 266,000 square miles of the Western Amazon in Bolivia, Colombia, Ecuador, Peru, and western Brazil.

Beltman is evaluating oil pollution in the region on behalf of plaintiffs in a lawsuit against Chevron over damages wrought by Texaco — now owned by Chevron — from 1972-1992. The stakes for Chevron are high — the suit could result in a multi-billion dollar payout to 30,000 indigenous tribe members and poor farmers.

Oil exploration in widespread in the western Amazon. A study published last year showed that 688,000 square kilometers (170 million acres) of the region is under concession for oil and gas development, including 72 percent — of the Peruvian Amazon, an area significantly larger than California. Some of the concessions overlap with protected areas and indigenous reserves.

Environmentalists have voiced grave concern over these developments. Oil and gas extraction can result in direct deforestation as well as contamination of waterways and lands with oil and drilling byproducts. In Ecuador, the law suit against Chevron estimates that Texaco spilled more than 17 million gallons (64 million liters) of crude oil and dumped some 20 million gallons (68 million liters) of other toxic chemicals into rivers during its years of operation.

Oil and gas development is often accompanied by road-building which provides access to previously remote areas and facilitates deforestation, colonization, and illegal logging, mining, and hunting.