Monitoring satellite images of Greenland to determine how much ice flows from landlocked glaciers towards the ocean to form floating ice shelves, which eventually break off into the sea, Jason Box of Ohio State and colleagues found that ice loss nearly tripled between in the summer of 2006-2007 and the summer of 2007-2008. Box estimates that Greenland has lost 55.4 square miles (920.5 square kilometers) — an area more than 10 times the size of Manhattan — since 2000.

“We now know that the climate doesn’t have to warm any more for Greenland to continue losing ice,” Box said. “It has probably passed the point where it could maintain the mass of ice that we remember.”

“But that doesn’t mean that Greenland’s ice will all disappear. It’s likely that it will probably adjust to a new ‘equilibrium’ but before it reaches the equilibrium, it will shed a lot more ice,” he continued. “Greenland is deglaciating and actually has been doing so for most of the past half-century.”

Box says warming climate around Greenland is believed to be speeding the melt. 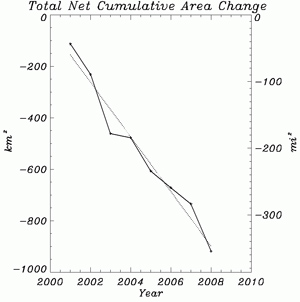 Our survey of 32 of the largest Greenland tidewater glaciers

Greenland. The linear correlation coefficient is -0.98.

of Manhattan Is., New York.