No one knows for certain how many insect species reside in the Amazon. One oft-quoted estimate is 30 million, but the actual number could be significantly lower or higher than this. Either way, biologists have long wondered why the richness of insect diversity in the Americas’ tropical forests is exponentially higher than temperate forests. Three popular hypotheses have emerged—the theory of refugia, the marine incursion hypothesis, and the riverine barrier hypothesis. To test these theories a group of scientists, headed by Dr. Scott Solomon, studied three species of leaf-cutter ant species from the Amazon. 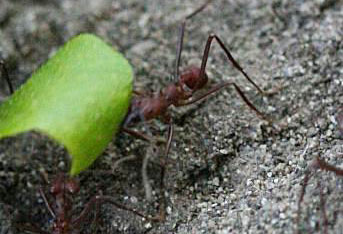 
“It is interesting that Amazonian rivers acts as barriers to some birds, but these ants are apparently able to cross them,” says Solomon. It is assumed that winged leaf-cutter ants take to the air over the rivers. Leaf-cutter ants are known to be able to fly at least 2 km and probably further

While the riverine barrier hypothesis came up short, the marine incursion hypothesis and the theory of refugia—which is hotly debated among scientists—proved to be better descriptions of the ants’ evolutionary past.

The theory of refugia reasons that 21,000 years ago, during the last ice-age, the tropics experienced a long dry spell causing tropical forests to shrink into fragments that served as refuges for plants and animals. The species that survived migrated to these pockets of suitable habitat; many species would end up in more than one pocket, thus allowing for independent evolution. In simple terms, the refugia would have acted like an island archipelago, creating wide diversity byway of a multitude of small, disconnected areas. The researchers found that the ants’ evolution showed some overlap with ice-age refugia. 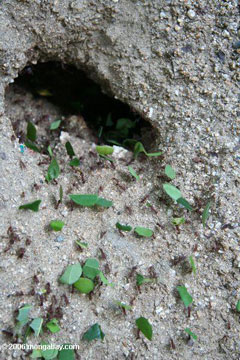 One has to travel even deeper into the past to encounter the marine incursion hypothesis. The theory, which also gains credence from the study, posits that somewhere between 10 and 15 million years ago (the Miocene), sea water flooded the Amazon, causing species to migrate to high elevations surrounded by water. Acting much like the theory of refugia, this hypothesis claims that the inundated Amazon temporarily became a collection of actual tropical islands.

While this paper points to refugia and marine incursion as the likely candidates for the Amazon’s diversity, it probably won’t end the scientific debate. One of the project’s researchers, Ulrich Mueller, states that their findings still fall short of providing a full explanation of the region’s unparalleled diversity. Still, he believes, the reason for such diversity probably included some combination of ice-age refugia and Miocene flooding.

The study chose leaf-cutter ants, which they describe as “the dominant herbivores of the Neotropics”, due to their pervasiveness throughout the tropics, the ease of collecting them, the fact that each species possesses different environmental tolerances, and because the species diversified at the right time to test the various hypotheses.