Honolulu, Los Angeles and metropolitan Portland have the smallest carbon footprint among American cities, while Cincinnati-Middletown area, Indianapolis, and Kentucky’s Lexington-Fayette have the worst, according to a new report that analyzes carbon emissions from transportation and residential energy use by city dwellers.

The Brookings Institution study, released Thursday, shows that residents of the 100 largest metropolitan areas in the U.S. emit on average 2.47 metric tons of carbon per person per year, 14 percent less than the 2.87 ton average for the country. But the research revealed large differences in per capita energy use in cities across the U.S.

“Residential density and the availability of public transit are important to understanding carbon footprints, as are the carbon intensity of electricity generation, electricity prices, and weather,” the Brookings Institution said in a statement. 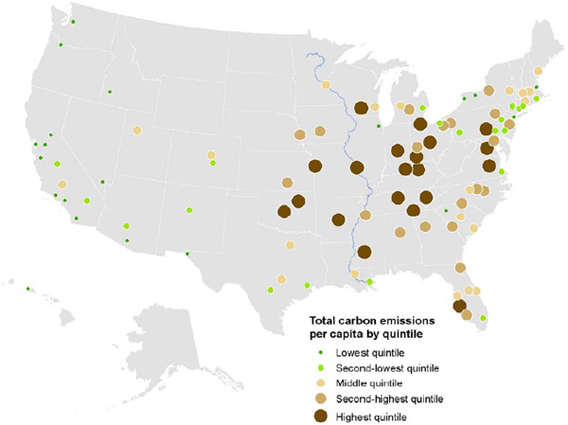 Per capita carbon emissions from transportation and residential energy use, 2005