New analysis of 43,000-year-old samples of Neanderthal remains from Spain’s Iberian Peninsula suggest our relatives eked out a meager existence, possibly supplemented by cannibalism. The results are published in the early online edition of the Proceedings of the National Academy of Sciences (PNAS) for the week of December 4-8, 2006.

Examining remains found in an underground cave system, a team of researchers lead by Antonio Rosasa, a paleontologist from the Museo Nacional de Ciencias Naturales in Madrid, found evidence of cut marks on skeletal bones and signs of dismemberment, possible indications of cannibalism. Further, analysis of dental remains suggest “several episodes of starvation or minimal nutrition occurr[ing] during the developmental years.” There were also indications of geographic variability between different populations of Neanderthals, with southern Neanderthals “probably having wider, flatter faces.”

The researchers say their work sheds light on the lifestyle and evolution of Neanderthals. 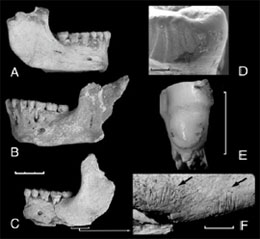 The Neanderthal (Homo neanderthalensis) was a species of the Homo genus that inhabited Europe and parts of western Asia as early as 350,000 years ago before disappearing some 33,000 to 24,000 years ago. Neanderthals had large braincases, short but robust and muscular builds, and large noses.

This article is based on a news release from PNAS.