Xinjiang, China’s largest and westernmost province, is one of the planet’s most remote and desolate regions. Covering more than one-sixth the country’s territory, Xinjiang borders Tibet, Mongolia, Russia, Kazakhstan, Kyrgyzstan, Tajikistan, Afghanistan, and Pakistan. The province is dominated by ethnic minorities, notably the Muslim Uyghurs who make up nearly half the 18-million population. Xinjiang’s ethnic mix reflects its historical importance as a central part of the Silk Road, a trading route used since ancient times to transport goods between East and West.

Formed geologically from the collision of the Indian plate with the Eurasian plate, Xinjiang’s topographical diversity rivals that of its human population, with deserts, evergreen forests, and some of the world’s highest mountains. The province includes Earth’s most remote land point, lying in the Dzoosotoyn Elisen Desert some 1,645 miles from the nearest coastline.

In September 2006, I, along with two friends, visited this distant land of breath-taking landscapes and fascinating local culture. The purpose of our trip was to visit Datong, a Tajik village located deep in the Kunlun Shan mountains of Xinjiang. Along the way I took hundreds of photos and met dozens of kind and wonderful souls.

The roads are rough dirt, frequently washed out by flash floods or buried in rockfalls or landslides. Reaching Datong requires a four-wheel- drive vehicle and precision driving skills. The village is several hours’ drive from Tashkurgan, a town known for its ancient stone fortress once used as a stopping point for Silk Road caravans. 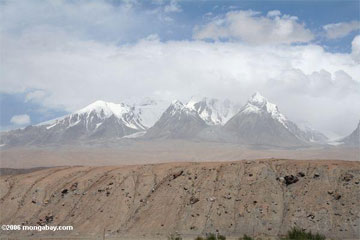 Snow-capped peaks and glaciers
along the Karakorum highway.

The population density is low out here—most people live in small villages consisting of a handful to a few dozen adobe huts surrounded by agricultural fields irrigated by the snow-fed streams. Datong, with about 800 people, is one of the larger settlements in this part of the Kunlun range. The village serves as a military outpost to patrol the Tajikistan border region. Our local guide told us that nomadic shepherds patrol the otherwise deserted mountains for suspicious activities. Nevertheless, the ruggedness of the terrain could easily conceal anyone who wanted to hide there.

Few westerners make it to Datong—one group of three to five came through earlier this year. We were treated as a curiosity, and wide-eyed stares greeted us everywhere we went. The more adventurous appeared from shadows to greet us in Sarikoli, the local language. People were friendly— we saw many smiling faces. It’s a testament to a different world, one where more goods are carried by donkey cart than by car, where one’s life can be spent entirely in one village, and time is measured in seasons. This is another China—one far from the giant metropolises of Beijing, Shanghai, or Hong Kong.