Thai fishermen caught a 646-pound catfish believed to have been the world’s largest freshwater fish ever recorded, a researcher said Thursday. The 8.9 foot long Mekong giant catfish was the heaviest recorded fish since Thailand started keeping records in 1981.

The villagers had hoped to sell the fish to environmental groups, which planned to release it to spawn upriver, but it died before it could be handed over. The catfish was later sold in pieces to villagers to be eaten.

The Mekong giant catfish is considered among the world’s most threatened catfish species due to dam construction and habitat degradation along the Mekong river. According to National Geographic only 11 and eight fish were caught in 2001 and 2002 respectively. In 2003, fishers captured six giant catfish in Cambodia, all of which were released as part of the Mekong Fish Conservation Project.

Very little is known about the ecology of the species. 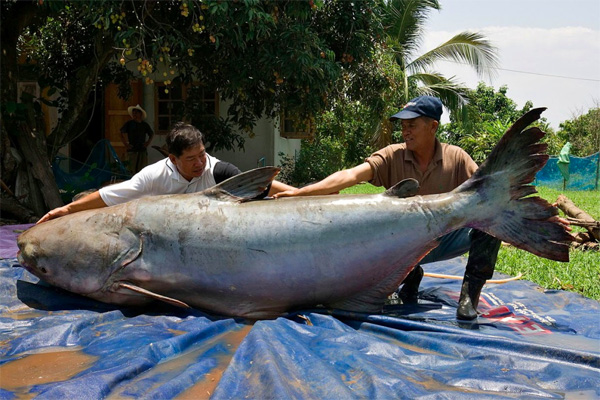 Thais Hunt for a Bear-Sized Catfish

The monster fish announced itself with four resounding whacks of its tail, thrashing against the net that had trapped it in the pale brown water of the Mekong River.

It was a fish called the giant catfish and it was the size of a grizzly bear, taking five boatmen an hour to pull it in and 10 men to lift it when they reached the shore in this remote village in northern Thailand.

It was only after their catch had been chopped into pieces and sold that they learned how special it was. At 2.7 meters, or 9 feet, long and weighing 293 kilograms, or 646 pounds, it may be the biggest freshwater fish ever recorded.

But in one of the world’s more surprising mysteries, nobody really knows which is the biggest species of fish lurking in the waters of the Mekong or the Amazon or the Yangtze or the Congo or the Colorado or Lake Baikal.

When the giant catfish was caught in May, Zeb Hogan, a biologist, rushed here from an expedition in Mongolia to take a look. It was his first trophy in a project to identify and study the world’s largest freshwater fish in the hope of protecting their habitats and slowing their extinction.

Sponsored by the National Geographic Society and the World Wildlife Fund, Hogan has embarked on an 18-month expedition that will take him to five continents and more than a dozen rivers.

Some species may already be too rare to study, but he has started with the Mekong, which he said had seven species of huge fish, more than any other river, along with at least 750 other species.

All of them are threatened, as are fish in rivers all over the world, by overfishing, pollution and development, including major dam projects.

The Mekong giant catfish (Pangasianodon gigas) may be the first to disappear from the river, he said. The few that remain can be spotted now only in central Cambodia and here, just below the Golden Triangle, where northern Thailand, Laos and Myanmar meet.

So far, Hogan said, no one has made a credible claim to top this year’s trophy. It is five times the size of the biggest catfish recorded in the United States, a 121-pound Mississippi River fish that was also caught in May.

“I keep expecting people to send me photos or records of larger fish, but nobody has,” he said. The candidate species must grow to at least 200 pounds or longer than 6 feet – fish like sturgeon, lungfish, gars, stingrays, carp, salmon, perch and paddlefish.

Already Hogan has a collection of unconfirmed fish stories – 3-meter catfish in Bulgaria, 500-kilogram stingrays in Southeast Asia and 5-meter arapaima in the Amazon, none of them well documented.

“A lot of people say the arapaima is the largest freshwater fish, but when you look at the records, there’s no reliable record of any over 200 kilograms, and certainly not over 300 kilograms,” he said.

Hogan has his own personal candidates, the Chinese paddlefish in the Yangtze and the giant stingray here in the Mekong.

When he began to spread the word in Cambodia that he was looking for giant fish, Hogan said, it was stingray he had in mind. “I thought I’d get 50 phone calls the first week, but nobody contacted us,” he said. “So they’re more rare than I thought they were.”

The giant catfish have been disappearing fast, from more than 60 a year caught here in the early 1990s to just a few today. Their decline coincides with the completion of the first of a series of dams being built upriver in southern China.

“The damming and the blasting of rapids have changed the habitat and the river flow,” said Boonluen Chinarath, the village chief in Hat Khrai, who said he had caught as many as 100 giant catfish in nearly a half-century of fishing.

“The river rises and falls more quickly than before,” he said. “Maybe it’s up today and maybe it’s down tomorrow.”

Many fish cue their migrations to the rise and fall of the water, Hogan said. The giant catfish are caught in April and May when they swim upriver to spawn just north of here.

Before he headed out on May 1, one of the fishermen, Thirayuth Panthayom, made sure luck would be on his side. He said he prayed at the shrine to the God of Catfish and begged his boat to help him: “Please, Miss Boat, let me catch something today and I’ll sacrifice a chicken for you.”

He had only been out for 15 minutes when, he said, he saw the fish smack the water four times with its tail – “Pung! Pung! Pung! Pung!” It took his crew an hour to pull it in.

His father, as owner of the boat, earned nearly 80,000 baht, or about $2,000, for the fish from the village fishing association, a fortune in rural Thailand. Thirayuth, like each of the other four members of the crew, got 7,000 baht of this, which he said he gave right back to his father.

As part of its permit to fish for these endangered catfish, the village association then sold the fish to the Department of Fisheries, which harvests their eggs and sperm as part of a captive breeding program.

After that, the fish are to be returned to the river. But, as usually happens, this fish, a female, did not survive the harvesting procedure, in which its belly is vigorously massaged and manipulated.

In the end, the men of the village cut it into giant steaks and sold it. When he tried a bit, Thirayuth said, it tasted soft and sweet and mild.

“It’s hard to describe,” he said. “You have to try it yourself.”