Scientists and conservationists are calling for action to stop violence against Indigenous peoples, local communities and environmental defenders across the Amazon region in South America.

The Association for Tropical Biology and Conservation, a scientific society with more than 900 members in 67 countries, urged governments across the region and the international community to take action in a declaration presented July 14 at the end of the association’s annual meeting in Cartagena, Colombia.

“It is important for scientists, conservation practitioners, NGOs, and other conservation stakeholders to amplify [Indigenous Peoples and Local Communities, IPLC] voices and place IPLC agendas in the spotlight and strengthen the official agencies responsible for sustaining their social rights,” the association noted in its Cartagena Declaration.

Latin America has been the most dangerous region in the world for IPLCs and environmentalists for years. Global Witness, a London-based NGO, documented 227 killings worldwide in 2020 and nearly three quarters were in Latin America. Colombia, Brazil and Peru accounted for 40% of the global total.

“The violence against Indigenous People and Local Communities (IPLCs) and especially against environmental defenders may be strengthened and amplified in the near future as a consequence of the alignment of illegal resource extraction – for instance through fisheries, mining, logging – and drug trafficking,” the Association for Tropical Biology and Conservation (ATBC) highlighted in its declaration.

ATBC is calling for governments to strengthen IPLC sovereignty over their territories, develop cross-border policies, and increase oversight and enforcement in remote areas. The association also called for more international pressure on corporations sourcing products from illegal activities and the inclusion of science in decision-making and public policy.

The murders of Indigenous rights leader Bruno Pereira and environmental reporter Dom Phillips in the Brazilian Amazon in June shone a spotlight on violence against IPLCs and environmentalists in the region. The killings were part of the impetus for the Cartagena Declaration but the violence is widespread and historical, said João Campos-Silva, a Brazilian conservationist and member of the ATBC committee that worked on the declaration.

“We cannot neglect the responsibility of the governments,” said Campos-Silva, who is also a post-doctoral fellow at the Norway University of Life Sciences. His research is in the Brazilian Amazon, where he said there has been increasing risk and violence in the past few years during the administration of Jair Bolsonaro.

“The violence can jeopardize a lot of things,” he told Mongabay, highlighting that first and foremost is the danger to local leaders and communities working to protect their territories. “It can compromise biodiversity. It can compromise research and conservation efforts.”

Chile officially became the latest party to the Escazú agreement in June, after the first Conference of the Parties was held there in April. But the three Amazon region countries with the most killings of environmental defenders – Colombia, Brazil and Peru – have not yet ratified the treaty despite becoming signatories back in 2018 and 2019.

Ratification by Colombia of the Escazú agreement advanced earlier this year but hit a roadblock in the Senate in May. In July, Peru’s foreign relations congressional committee voted for the second time to shelve a bill to ratify the Escazú agreement.

“During the pandemic, the murders of Indigenous defenders and crimes in communities due to territorial issues have increased,” Nelsith Sangama, a leader of AIDESEP, the Indigenous federation of the Peruvian Amazon, said in a July 13 statement in response to the congressional decision.

Amnesty International voiced concerns earlier this year over rising violence against Indigenous communities and environmentalists in jungle areas in Peru. At a gathering and protest actions in Lima in June, the National Defenders Network reported 16 environmental defenders has been killed in the country since the pandemic began. 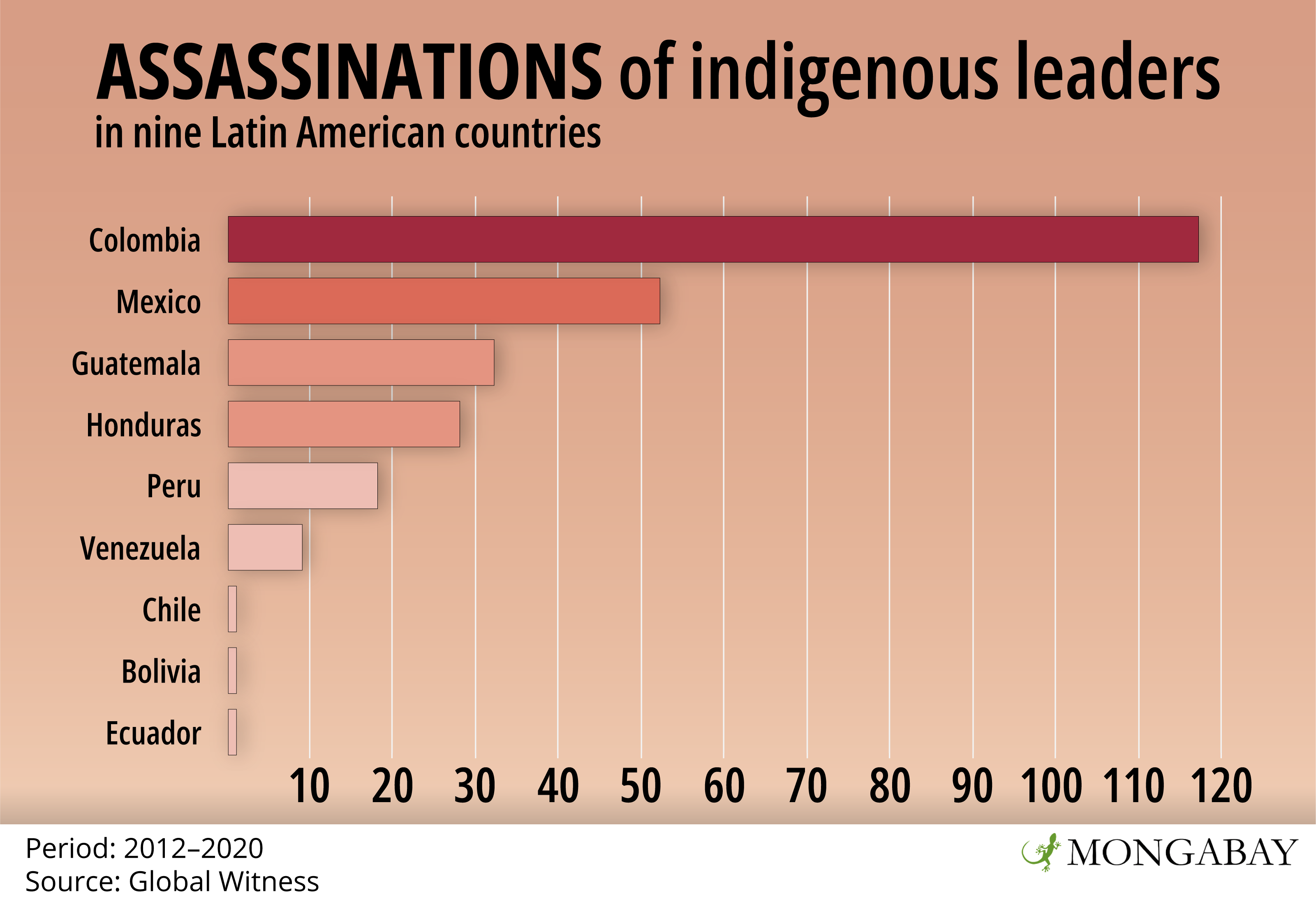 “Latin America has consistently been the most dangerous region for land and environmental defender,” Global Witness campaigner Rachel Cox told Mongabay via email. “Our most recent data suggests that this trend continued throughout 2021.”

Back at the ATBC meeting in Cartagena, massive photographs of Bruno Pereira and Dom Phillips were projected on screens during the presentation of the declaration. The association includes many members who carry out research and conservation work in the Amazon.

The next worldwide ATBC meeting is set to take place next year in Coimbatre, in the Tamil Nadu state in India.

Banner image: Indigenous people from Pará and Amapá marched along the Esplanada dos Ministérios, in Brasília, to the Ministry of Justice, denouncing the invasions of their territories and the recent murders of leaders in Brazil. Photo by Tiago Miotto/Cimi.

Related listening from Mongabay’s podcast: We discuss the need for the Escazú Agreement with the executive director of the Women’s Earth and Climate Action Network, who shared in 2020 what’s key about the treaty, plus the work of some of the female Indigenous conservationists whose safety would be supported by it (the treaty has since come into force). Listen here: