KATHMANDU — Nepalis whose livelihoods rely on access to the country’s community forests have suspended planned protests against a new law they say will threaten their autonomy and force their groups to work under various bureaucratic mechanisms.

The move by the Federation of Community Forest Users Nepal (FECOFUN), which has been protesting the proposed changes for more than three months, follows talks with the Ministry of Forests and Environment.

FECOFUN chair Bharti Pathak said the network had presented a list of 10 demands to the government to organize sit-ins and protest rallies across the country. Most of the demands are related to the proposed Forest Regulation, a set of rules being formulated by the government to implement the federal Forest Act of 2019. The network says the government is going beyond its authority by creating institutions and provisions not envisioned under by the original act.

“We discussed our demands with the ministry, and the officials said ‘we will look into it’,” Pathak told Mongabay.

In Nepal, around 34% of the country’s forests are managed by more than 22,000 community-forest user groups. Under the community forestry principles pioneered by Nepal in the 1970s, each community manages its forest for its own use and benefits based on an operational plan approved by the divisional forest officer, a representative of the federal government.

Under the program, which began with the goal to reverse deforestation and protect existing forests, community members can collect wood up to a limit prescribed by the government based on the availability of wood and the condition of the forest. Nepal’s community forestry approach has received worldwide acclaim for helping the country increase its forest cover from 25% to 45% of its total area. 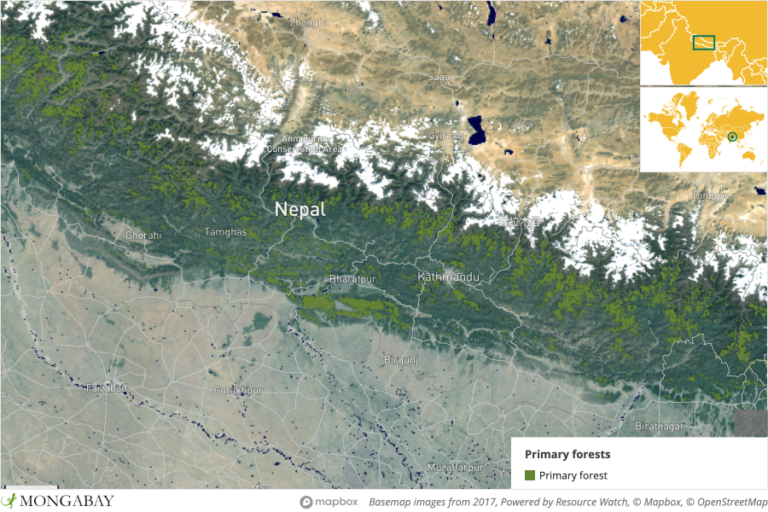 The new regulation would also only allow communities to run enterprises if they prepare a separate business plan for the local forest office to approve. The network, however, wants members to be allowed to operate forest-based enterprises and tourism programs as specified in the Community Forest Operational Plan, which user groups need to submit to the government every year.

“Taxation is also an important issue that needs to be addressed,” said Dil Raj Khanal, policy adviser to the network. Prevailing laws require forest user groups to pay taxes at the municipal, provincial and federal levels. “We demand that the government make necessary legal changes so that we have to pay taxes only to one authority,” Khanal said.

Another point of contention is that the federal and provincial governments have recently declared several new protected areas. These designations, Khanal said, go against the spirit of the Constitution and Nepal’s commitment to various international treaties that recognize the communities’ rights over local resources. “These parks, reserves, buffer zones, environment protection areas and forest protection areas are being created on lands managed by user groups. They are also leading to destruction of community forests that have been historically protected and sustainably harvested by local communities. We request that the government bring an immediate stop to these activities,” he said.

Pathak said FECOFUN members will return to the streets in protest again if the Council of Ministers approves the new regulation without incorporating their voices. “We haven’t seen the final draft of the regulation. We hope the government shares it with us for comments before it is approved.”

Megh Nath Kafle, a spokesperson for the Ministry of Forests and Environment, said the government is holding talks with FECOFUN and is optimistic that an agreement will be reached soon.

Banner Image: Members of FECOFUN take part in a street rally outside the Department of Forests and Soil Conservation in Kathmandu. Photo courtesy: FECOFUN