Congo’s bongos are in danger, and curbs on trophy hunting could save them

by Malavika Vyawahare on 24 September 2021

When the first bongo was reported dead by the Sangha River in the Republic of Congo in 1997, it was believed to have drowned. Several more turned up in the following weeks. Some were spotted tottering along open roads, unusual for a mostly nocturnal animal. Others appeared uncharacteristically fearless. All were emaciated.

At least 17 bongos died that year after a catastrophic explosion of Stomoxys flies descended upon the ungulates, biting them, enfeebling them, and often killing them. It alerted researchers to the possibility that all was not well with the bongo (Tragelaphus eurycerus).

An allotment of 15 adult males a year could lead to their disappearance from the Republic of Congo’s Bonio hunting concession within 25 years, according to the survey led by the Wildlife Conservation Society (WCS), a U.S.-based NGO.

The bongo’s bold stripes and striking horns make it a prized trophy, or, as one hunter put it, the “animal of a lifetime.”

Fewer than 30,000 of the chestnut-colored ungulates remain today, found in a belt just south of the Sahara. Of the two known bongo subspecies, the eastern bongo (T. e. isaaci) faces a steeper uphill battle for survival: Only around 100 of these mountain-dwelling antelopes remain in Kenya’s mountains. 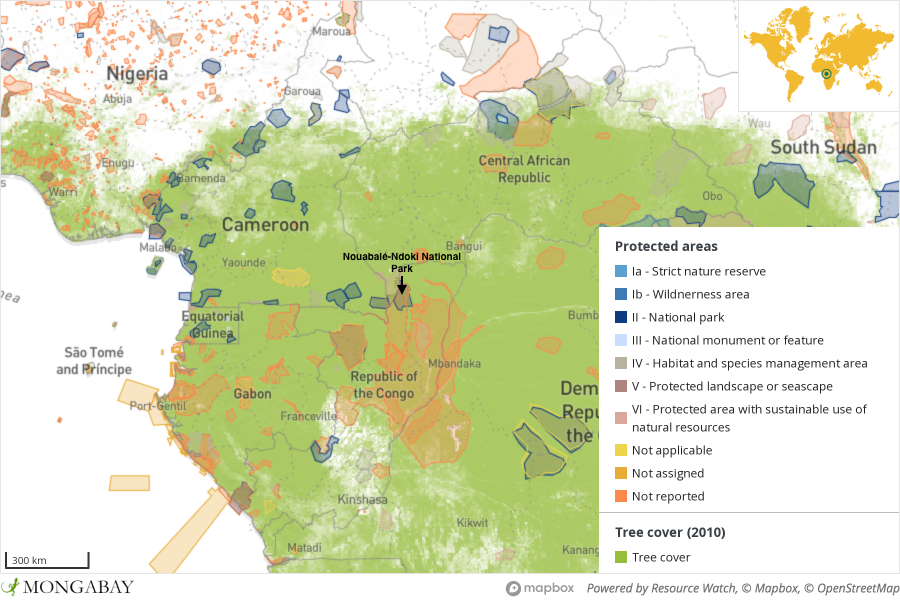 The lowland bongo (T. e. eurycerus) is found in western and central African countries, its range straddling the Congo River. Like its neighbors, Cameroon and the Central African Republic, the Republic of Congo allows commercial hunting of bongos in designated concessions.

The Bonio safari concession is located in the Kabo logging concession, which is part of the buffer zone of Nouabalé-Ndoki National Park. The park in northern Republic of Congo was itself carved out of a thickly forested logging concession in 1993, and is co-managed by WCS and the Congolese government.

There are an estimated 150 bongos in Bonio, but that number could be as low as 81, the WCS study estimated. The government should slash the hunting quota from 15 to three a year, the researchers say.

In their study, they considered how different hunting quotas would influence the bongo’s fate. There were three elements in the mix: the level of trophy hunting, unregulated capture, and disease risk. Trophy hunting at all levels poses some risk to the bongo’s continued survival in Bonio, the models show.

“Any more than three animals per year and your chances of local extinction go up dramatically,” said Emma Stokes, WCS regional director for Central Africa.

The only scenario in which extinction risk is zero is if no commercial hunting happens, there is no epidemic, and existing pressures from unregulated hunting do not intensify. Bongos are not traditionally hunted by residents or targeted by poachers. They can become unintended victims of snares or end up as roadkill. These activities were considered as unregulated harvest by the study authors.

As humans have learned the hard way, the risk of epidemics cannot be taken lightly. The tryst with Stomoxys omega flies in 1997 hit bongos in the Kabo area hard.

“There had been no full survey of the bongo population since the outbreak, so we didn’t know what the population was,” Stokes told Mongabay. “We wanted to be able to advise the government on a scientifically rigorous process to come up with a quota.”

What makes management even more fraught is our ignorance about these elusive salt-loving herbivores. “They are so unknown from a taxonomic point of view; no modern revision or genetic work has ever been attempted,” said Spartaco Gippoliti, an Italian taxonomist.

Trophy hunting is a hot-button issue in conservation. Advocates, mostly pro-hunting bodies, say it protects the hunted species by bringing in much-needed revenue, especially in remote parts of Africa where tourism is unlikely to become a crutch for conservation.

“I do not think properly managed hunting areas may put bongo populations at risk, especially if long-term benefits are shared with local communities, and habitat is protected,” Gippoliti said.

However, opponents say that talk of benefits is spurious and killing animals for sport flies in the face of conservation’s core tenets. The IUCN, the global conservation authority, maintains that trophy hunting efforts can aid the preservation of species, provided they are “well-managed.” (A Buzzfeed investigation published last year indicated that trophy hunting proponents hold undue sway at the IUCN.)

In 1995, when the Bonio concession was created, a survey conducted by the Congolese government, representatives from WCS, the German government’s development agency (GIZ), and the safari industry found that bongos were abundant in the area. Yet the surveyors advised caution, recommending that the quota should be set at three initially. It was later increased to eight.

Their caution proved prescient. Just two years later, the Stomoxys fly outbreak struck the bongo population in Kabo, killing young and adult bongos alike. Though the adult antelopes can weigh up to 350 kilograms (770 pounds), swarms of bloodsucking flies can weaken even the sturdiest of them.

In 1999, the government declared bongos fully protected and outlawed hunting. However, in 2011, it downlisted the species and allowed hunting again, with an even higher quota: 15 a year.

Nganongo said no hunting had taken place in the Bonio concession in the past few years. “From an economic point of view, it is a lack of revenue for the public treasury,” he said, “from the social point, there are job shortages for the local community and the indigenous populations.”

He said the data in the WCS study came from some years ago, and a new survey would inform the government’s decision on hunting quotas.

Congolaise Industrielle des Bois (CIB), a subsidiary of Singapore-based agribusiness giant Olam International, holds the logging contract for Kabo. Steven Fairbairn, external affairs head at Olam International, told Mongabay that the company has no say in deciding the hunting quotas. “We do not support any hunting activity, and in partnership with the WCS, we share the goal of protecting wildlife in the region,” he said.

The one thing that favors bongo conservation is local taboos against eating bongo meat; some people believe it causes sickness in children. This belief is so strong that surveyors who visited the Kabo concession in 1995 advised against distributing bongo meat to the villagers, a common practice after trophy hunts. However, these taboos could erode over time, the study authors cautioned.

There are signs of growing pressure on this tract of land. “If you look at the logging concession, there are a number of new roads that are being built in this area and also the up-gradation of a national road,” Stokes said. “The general trajectory is of human activities increasing in the area.”

There are also questions about much the past can tell us about future disease outbreaks. The study authors considered the 1997 Stomoxys outbreak a rare, once-in-a-century event. That explosion of biting flies came on the back of heavy rains followed by a prolonged dry period. A changing climate could increase the chance of another such outbreak, skewing the extinction risk.

(Banner Image:  A bongo captured on a camera trap. Image courtesy of WCS.)

Malavika Vyawahare is the Madagascar staff writer for Mongabay. Find her on Twitter: @MalavikaVy
FEEDBACK: Use this form to send a message to the author of this post. If you want to post a public comment, you can do that at the bottom of the page.

(Editorial Note: The article has been updated to reflect that the hunting quota was 15 adult males a year in 2017.)