It wasn’t just a single dugong, either. Fernando says he saw a family of five before they quickly disappeared in the murky waters. He never saw any dugongs again after that, despite operating boat tours daily, and that lone encounter remains deeply etched in his mind.

Then in March this year, a new sighting was reported: a dead dugong had washed up dead in a different part of the lagoon. Two weeks later, there was another dead dugong. Fernando says he didn’t go to see either, fearful they were from the family he’d spotted four years earlier.

Both were about 1.5 meters (5 feet) long and hence considered juveniles, about 7 years old, says Ranil Nanayakkara of Biodiversity Education and Research (BEAR). Dugongs are thought to live to about 70 years in the wild, which means these two died of unnatural causes, he says.

“The first dugong could be a victim of fish net entanglement, but the second one is definitely a victim of blast fishing, evident by the blood strains coming out of its eyes and nose,” Nanayakkara, a member of the IUCN/SSC Sirenia Specialist Group, told Mongabay.

In Sri Lanka, dugongs, also known as “sea cows” because they graze on seagrass on the ocean floor, are found only in the seagrass meadows of the Gulf of Mannar, Palk Bay and Palk Strait, the north and northwest arc of Indian ocean that separates Sri Lanka from India. The species’ conservation status has been assessed as vulnerable on the IUCN Red List.

Historical accounts indicate that dugongs were abundant in Sri Lankan waters decades ago, but were decimated by hunting for their meat, considered a delicacy by some communities.

They’re slow breeders, with a year-long pregnancy, and newborn calves depend on the mother’s support for several months; so the hunting pressure exacerbated the population decline.

In 1970, Sri Lanka declared the dugong a protected species under the Fauna and Flora Protection Ordinance (FFPO), but illegal hunting persists.

An average of about a dozen dugong bodies are reported annually, but conservationists say far more cases go unreported. Many are victims of blast fishing, or dynamite fishing, which is illegal in Sri Lanka but still commonly practiced.

Though often the unintended victims of blast fishing, but dugong are also sometimes deliberately targeted because they’re seen as a lucrative catch for the black market, says Prasanna Weerakkody of the Ocean Resources Conservation Association (ORCA).

Entanglement in fishing gear also poses a serious threat, Weerakkody says. He cites bottom-set gill nets, typically set for rays and skates, as particularly risky to dugongs as they graze on the seabed.

“When a dugong gets caught in a net, it rolls its body with the intention to get away from the net, but this further tightens the net, eventually killing the dugong due to suffocation as they cannot surface for oxygen,” Weerakkody says. 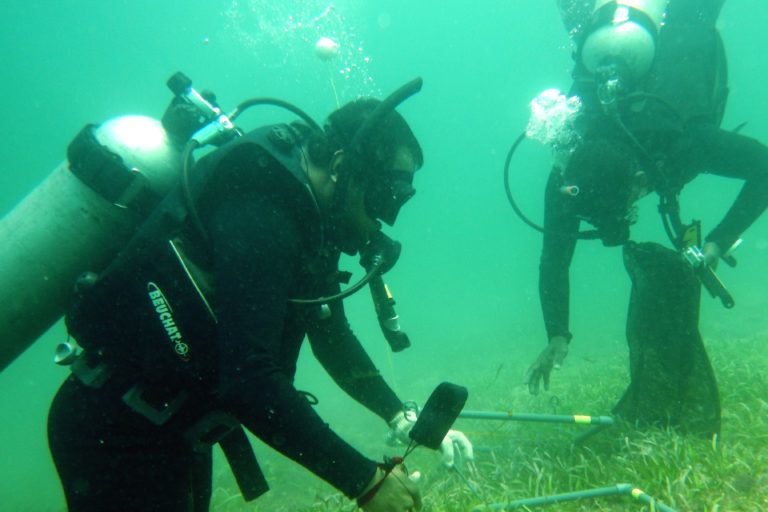 Researchers surveying the seagrass meadows that are critical for the dugong’s survival. Image courtesy of ORCA.

Amid these persistent threats, Sri Lanka has taken measures to protect its dugongs. From 2015 to 2018 it was part of the global Dugong and Seagrass Conservation Project implemented in eight countries. The project ended with the production of a dugong seagrass conservation management plan for Sri Lanka, which recommended several actions to reduce dugong mortality and ensure their long-term survival.

Arjan Rajasuriya, coordinator of the coastal and marine program at IUCN Sri Lanka and a member of the dugong project management planning committee, said that while some actions were taken during the project’s duration, many recommendations have still not been implemented.

A proposal to establish three new marine protected areas (MPAs) covering 902 square kilometers (348 square miles) of core dugong habitat is one such recommendation. Two of these MPAs were proposed for the Gulf of Mannar, and the third in Palk Bay.

Sri Lanka already has several MPAs, but they aren’t well-managed and have failed to achieve conservation objectives, according to a 2007 review.  These MPAs are administered under the Department of Wildlife Conservation, but the agency doesn’t have a strong marine conservation unit.

Against such a backdrop, the mere declaration of marine protected areas won’t be effective in dugong conservation, Rajasuriya tells Mongabay.

“While it is important to declare these areas as MPAs, regular monitoring and management are key to ensuring the dugong’s safety,” he adds.

A top-down conservation approach for marine species may also not be as successful as a co-management strategy that engages local communities in the conservation efforts, Rajasuriya says.

“These communities too should get monetary benefits from the earnings of tourism in the area, so they get a sense of ownership that would stimulate them to protect rare marine species such as dugongs,” he says.

The latest version of Sri Lanka’s red list, published in 2012, doesn’t assess the conservation status of marine mammals at the national level. But the upcoming update will change this, BEAR’s Nanayakkara says, and for the first time will list the dugong as critically endangered.

Banner image of a dugong body found on March 15 with bleeding from the nostrils and mouth, a possible victim of blast fishing, courtesy of Ranil P. Nanayakkara.