“This is a country that has a forestry vocation,” says José Miguel Orozco, professor of forest governance and policy at Bogotá’s Francisco José de Caldas District University.

High-altitude Andean forests, low-altitude basal forests, cloud forests, dry forests, mangroves: 52% of Colombia’s landmass is covered in forest, and it is the second most biodiverse country in the world, home to 58,312 known species. The highest concentrations of biodiversity occur in the Amazon and Pacific regions, which together are home to 80% of the country’s forests.

Indigenous reserves steward 46% of Colombia’s forests, and Afro-Colombian communal territories account for 7.3%. About 16% fall under the protection of the country’s 59 national parks. These three systems have the highest levels of protection and some of the best conservation outcomes.

And yet, Colombia’s forests are also being chopped down at an alarming rate. 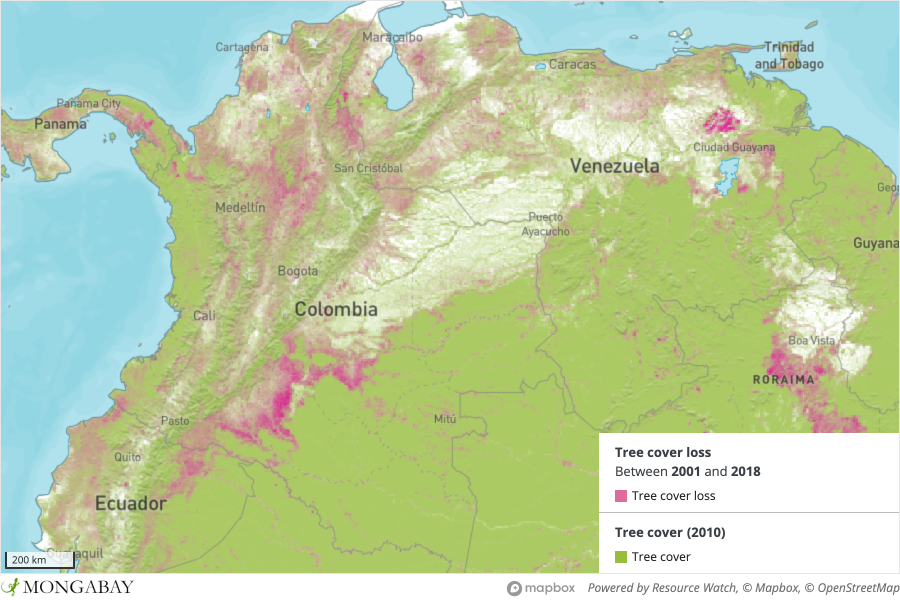 In 2016, the Colombian government signed a historic peace accord with the FARC rebels, ending more than half a century of civil war that left 260,000 people dead and 5 million people internally displaced. A consequence of the conflict was that Colombia’s forests remained relatively well-preserved, with the FARC rebels strictly controlling deforestation so as to conceal their movements and the illegal mines and coca plantations that financed most of their operations. With the group’s disbandment, things have changed.

“The last five years coincided with the time period denominated as post-conflict, and what we saw at the beginning of this era was the huge increase in the problem of deforestation at the national level,” Orozco says.

FARC’s demobilization left a power vacuum that is now being fought over by other illegal criminal groups like paramilitaries, ELN guerrillas and FARC dissidents who refuse to disarm.

The highest levels of deforestation are in the Amazon, home to two-thirds of Colombia’s forests, with 70% this deforestation related to land grabbing driven by illegal groups linked to illicit activities. These activities include illegal logging, mining (especially for gold and cobalt), coca cultivation to make cocaine, and clearing of forest for pasture and land speculation — often also done to launder money earned from illicit operations.

According to the National Department of Statistics (DANE), in 2018, Colombia’s national multidimensional poverty level was 19.6%, rising to 39.9% in rural areas. In the HDNs, it was calculated at 53.1%, increasing to 62.7% in rural areas.

This situation is ideal for fomenting illegal activities, but also for the expansion of other activities in the region that drive deforestation, including agriculture, cattle ranching, mining, and building roads and infrastructure that provide easier access to forests and bring new waves of occupiers.

In 2017, the  government defined 344 municipalities in the country as “zones most affected by the armed conflict.” These are regions that have experienced the highest levels of violence, criminal activity and displacement. A hundred and twenty of the HDNs fall within these conflict-affected zones, showing how, with the resurgence of violence after the peace accord, many of the drivers of deforestation are linked to regions where the dynamics of violent conflict are still playing out.

These dynamics have also spilled over to affect those protecting the forests and natural resources. Global Witness ranked Colombia as the most dangerous place in the world in 2019 to be an environmental defender, with the most recent casualty being an environmental official, Javier Francisco Parra, who was murdered on Dec. 3 in the Amazon.

Environmental defenders could benefit from the implementation of the Escazú Agreement. This is the first environmental human rights treaty for Latin America and the Caribbean, and was signed by Colombia’s President Iván Duque in December 2019, but still needs to ratified by the country’s Congress. Yet this process has stalled as the president’s own party has been pushing back against the agreement, saying it will jeopardize Colombia´s sovereignty and put the brakes on development projects.

In addition to trying to crack down on illegal activities, the Colombian government, with support from international partners, has identified the need to support the economic empowerment of communities in these rural areas, tying these initiatives into the country’s international agreements relating to forests.

Colombia, as a signatory to the New York Declaration on Forests, aimed by 2020 to halve natural forest loss and by 2030 to reach net-zero deforestation, meaning that any loss of forest will be offset by the replanting of native forest.

But Colombia missed the 2020 target, with deforestation in the first quarter of 2020 exceeding the total for the whole of 2019. Still, in November 2020 the government announced that it would increase its greenhouse gas reductions from its initial target under the Paris climate accord, from 20% to 51% by 2030. The government plans to meet this target by transitioning to clean energy and transport, reducing deforestation and planting 180 million trees by 2022 — a commitment made by Duque at the Davos summit in January 2020.

Colombia built its REDD+ initiatives on the back of a large-scale program called Visión Amazonía, which focuses on the Amazon region and aims to provide jobs, improve environmental governance, and promote Indigenous participation in a region where more than half the forests fall within Indigenous reserves.

Norway, Germany and the U.K. have been supporting these efforts through a payment-for-results agreement called the Joint Declaration of Intent, which has paid $85 million to the Colombian government since 2015 and renewed a pledge in 2019 for an additional $366 million. This agreement became even more lucrative when, in late November 2020, the Norwegian government doubled its payout to $10 per hectare of tropical forest conserved.

Viviana Zamora, technical adviser to the ProBosques project of the German cooperation agency GIZ, says forest conservation in Colombia has been given a major boost thanks to the agreement, as IDEAM received large amounts of funds to improve its monitoring capacity, allowing it to detect changes in forest cover, analyze the causes and agents of deforestation as well as the level of forest emissions that are necessary for payment under REDD+.

Zamora also says that although an international carbon market has not yet been fully established, the REDD+ program has provided a means to support the forest economy through “mitigation and adaptation processes, also helping to improve income and employment for communities living in these areas that are threatened by deforestation and more affected by the armed conflict.”

Since taking office in 2018, the Duque administration has initiated or bolstered several policies and strategies, including the National Development Plan 2018-2022, to integrate key aspects of the Joint Declaration of Intent.

The government also established an “agricultural frontier” in 2018 to stop the continued encroachment of farms into wilderness areas; put in place zero-deforestation agreements with the palm oil, dairy, meat and cacao industries through Tropical Forest Alliance (TFA); and implemented a “green growth policy” that proposes a transition to a model focused largely on the forest economy, green businesses, and the bioeconomy.

Other strategies to halt deforestation, like the military operation Artemisia, launched in 2019 to crack down on illegal miners and loggers, have had mixed results. In September 2020, Fundación Ideas para la Paz released a report noting the operation had increased the risk for other environmental defenders such as park rangers and noting that it didn’t focus on the sophisticated networks and powerful interests behind the deforestation, but rather the vulnerable communities in these zones.

In October 2020, Colombia’s National Planning Department (DNP) released a draft policy for the control of deforestation and sustainable forest management. While the action plan still needs to be finalized, the document aims to create an interdepartmental approach — including the ministries for the environment, defense, agriculture, justice and technology, as well as the agencies for land and environmental licenses, state prosecutors, IDEAM and the National Parks Authority — to deal with the multifaceted issue of deforestation while growing the green economy.

The document emphasizes the huge economic potential of the forests in the country. It notes that only about 500 plant and animal species out of the thousands recorded in the country are used for some sort of economic activity. It also estimates that, in 2017, the supply of forest products and their derivatives generated about $1.4 million, or about 0.52% of the country’s GDP. The DNP looks to boost these numbers, noting that the European Union´s bioeconomy sector contributed 9% to its GDP in 2014, generating 18.6 million jobs and $2.6 billion in sales.

The environment ministry, working environmental authorities and partners such as the FAO and WWF, are supporting community forestry projects, which combine forest conservation with economic and employment generation for the communities that live in them.

“Heart of the Amazon” is a Visión Amazonía initiative funded by the Global Environment Facility and implemented by the World Bank, which aims to prevent 9.1 million hectares (22.5 million acres) of deforestation in part by supporting community forestry projects in an important transition zone connecting the Amazon and the Andes mountains.

The project has already seen major success with 115 campesino families who were previously involved in planting coca now conserving 21,000 hectares (52,000 acres) of forest and sustainably harvesting Amazonian species as camu camu and asaí.

“For us a success is that today local communities believe that it is possible through community forestry to resolve social issues,” says Luz Marina Mantilla Cárdenas, director of the government-backed Amazonian Scientific Research Institute (SINCHI), in an interview with Mongabay.

For decades SINCHI has been doing research to developing ways to cultivate Amazonian plant and animal species economically, with part of its mission now to develop the bioeconomy. The institute has also been an integral part of Heart of the Amazon project, conducting a 20-year study in the region showing how agroforestry and sustainable forestry practices can prevent and control deforestation.

“A lot of SINCHI’s success in that … we connect the dots, we don’t commercialize but we look for who can commercialize the products, because we are interested in completing [the value] chain,” Cárdenas says.

The DNP’s policy document tries to be more intersectional, widening its focus and looking at the long-term and structural issues, says Rodrigo Botero, director of the Amazon-focused Foundation for Conservation and Sustainable Development (FCDS). However, he says “it is more focused on the economist’s vision that the problem is in searching for the productivity of the forests,” rather than placing sufficient emphasis and effort on how to resolve the issues of access and rights to the land and the forests in these areas.

Colombia remains one of the most unequal countries in the world, where less than 1% of the population owns more than 50% of productive land. This was the primary issue that fueled the civil war, and rural land reform and access to land were key aspects of the peace accord that ended it. Yet, according to a 2020 KROC Institute report, only 3% of the 104 rural reform and access-to-land commitments have been completed, while 34% have not yet been started, 52% have begun minimally, and 10% are partially done.

Manuel Rodríguez, a professor, former environment minister and founder of the National Environmental Forum, told Mongabay in an interview that there is a lot of potential to develop the economy sustainably, especially in terms of agriculture and ecotourism. But Colombia, like most of Latin America, still has profoundly extractivist development plans, with most of the country’s GDP coming from mining and oil, he said.

A 2020 article in the Journal of Political Ecology argues that the government appears to be embracing REDD+ and international financial support to protect forests and build peace, yet simultaneously supporting natural resources extraction in the form of mining, infrastructure and industrial agriculture. This, it says, creates contradictory policies that incentivize environmental degradation. It cites as an example how 18 protected areas overlap with 29 oil blocks currently in operation, and another 12 reserved and 15 available oil blocks.

All this ultimately puts Colombia at risk of missing its climate and conservation targets. Rodríguez says that if Colombia really wants to make its sustainable development agenda more than rhetoric, the country will need a much more ambitious forest policy.