Get sick or go hungry? Workers face dilemma at Freeport’s Grasberg mine

Thousands of workers at the world’s largest copper and gold mine, run by U.S.-based Freeport McMoRan in the Indonesian province of Papua, have been instructed to remain on the company’s premises or risk being furloughed without pay, amid an outbreak at the mine that has seen 56 employees test positive for COVID-19, with one death, in recent weeks.

Freeport announced the test results last week, telling reporters that the outbreak had been detected in mid-March after an employee tested positive for the disease, prompting the firm to test 400 workers living in the same barracks.

“One by one, they were picked up at the barracks, and then sent into quarantine,” an underground worker at the mine told Mongabay by phone. “We are panicked.”

The mine, known as Grasberg, has emerged as one of the worst coronavirus clusters on the Indonesian part of the giant island of New Guinea.

Three hundred and five people in Papua and neighboring West Papua province have tested positive for the disease, with seven deaths, according to the national COVID-19 task force.

The two provinces have taken aggressive measures to stop the virus, imposing travel restrictions on most air and sea travel. The region is one of the remotest in Indonesia, with scant public health facilities and isolated indigenous communities who could be particularly vulnerable to the disease.

Indonesia as a whole has seen 930 coronavirus deaths, more than any Asian country besides China.

Some countries, such as Peru, Mexico, Mozambique and Malaysia, have suspended or reduced production at mines to prevent the spread of the virus.

In April, Freeport closed a mine in New Mexico after three workers tested positive for COVID-19. It has also announced plans to cut its 2020 costs by 18% as copper prices plummet.

In Indonesia, forced closures of mines, plantations and factories have been limited, though authorities in the city of Surabaya ordered a Philip Morris tobacco plant to close in late April after two workers died of the coronavirus. Sixty-one workers there have since tested positive.

Despite calls to halt operations at its mine in Papua, Freeport said operations would continue following redoubled health protocols, such as requiring a body temperature check for every employee who wants to enter the company’s work area, closing facilities such as schools, places of worship and cafeterias, and spraying disinfectant, spokesman Riza Pratama wrote in an email.

Richard Adkerson, the CEO of Freeport McMoRan, said last month that testing and screening activities at the Grasberg mine “are much more advanced than much of what we’re seeing today in communities in the United States.”

Some workers, however, are feeling anxious.

Those who want to leave the company’s premises in the Papuan highlands must sign a form, seen by Mongabay, saying they understand they may not be able to return to work and may not be compensated during their absence.

Riza said employees were “free to choose” whether to stay or go, but did not address the part about them not being paid.

“We are facing a dilemma,” the underground worker said. “If we take a break and return to the city, we have to sign a statement that means we are voluntarily resigning.”

Around a million Indonesian workers have been furloughed due the pandemic, with hundreds of thousands more laid off, President Joko Widodo said on April 30.

Aser Koyamee Gobai, the head of the All Indonesia Chemical, Energy and Mining Workers Union’s branch in Mimika, where Grasberg is located, said workers shouldn’t have to choose between their lives and their livelihoods.

He said he was aware of the furlough threat, but “management didn’t give us, the labor union, a chance to discuss the matter,” he said in a text message.

Noting that the Indonesian government recently acquired a 51% stake in Freeport’s Indonesian unit, Aser called on operations at the mine to be suspended, with workers receiving pay during the closure as Indonesia grapples with the coronavirus outbreak.

“The safety of workers is in jeopardy because we are forced to work in the midst of COVID-19,” he said in a statement. “Hunger too can kill. So we have to be willing to work amid the coronavirus.”

Merah Johansyah, the head of the Mining Advocacy Network, an Indonesian NGO, said Grasberg workers were facing a situation akin to “slavery.”

He called for production to be suspended, noting that the 2009 Mining Act stipulates that mining business activities can be halted in the event of an epidemic.

Klemen Tinal, Papua’s deputy governor, said the province might shut down the mine if the situation worsened.

“We have asked [Freeoport] to conduct a rapid test for all workers, without any exception, and then after three weeks, we are going to review the trend,” he said by phone. “If by that time there’s a spike in the case, and the condition is extreme, we are open to the option to halt the operation.”

Erick Thohir, the minister of state-owned enterprises, did not respond to a request for comment.

Grasberg isn’t the only enterprise in Papua where workers have had to choose between keeping their jobs and protecting their health.

Palm oil giant Korindo, which dominates the plantation sector in southern Papua, has gone even further than Freeport, threatening to fire workers who leave the company’s premises, according to a company document seen by Mongabay. The order is in effect for an indefinite period.

Workers are barred from returning home at the end of May for Idul Fitri, the end of the Muslim holy month of Ramadan, as is customary in Indonesia.

Multiple sources in the plantation told Mongabay that workers were complaining about the quarantine standards. Some had refused to be quarantined because the company didn’t provide proper barracks, instead placing people in rooms together. “Two beds for one room,” a worker at the company’s operation in Papua told Mongabay by phone.

“All of them [workers] are all on alert, they keep monitoring the situation, and cannot go anywhere,” he added.

Korindo did not reply to questions.

At Freeport, 19 of the infected workers, who include security staff, managers and underground workers, are being treated at a state-run hospital in the nearby town of Timika, Fransiska Tekege, a member of the national COVID-19 task force stationed at Timika Hospital, told Mongabay. But the facility only has one pulmonologist, or lung specialist. The rest of the workers are being treated at Freeport’s own hospital.

The Freeport worker who spoke on condition of anonymity said that while management had provided employees with soap, masks and hand sanitizer, social distancing was minimal.

“It’s impossible we can take any social distance,” he said. “Every morning we jostle to get into the bus to work. Nothing much different, just like the other normal days before the virus spread,” he said. 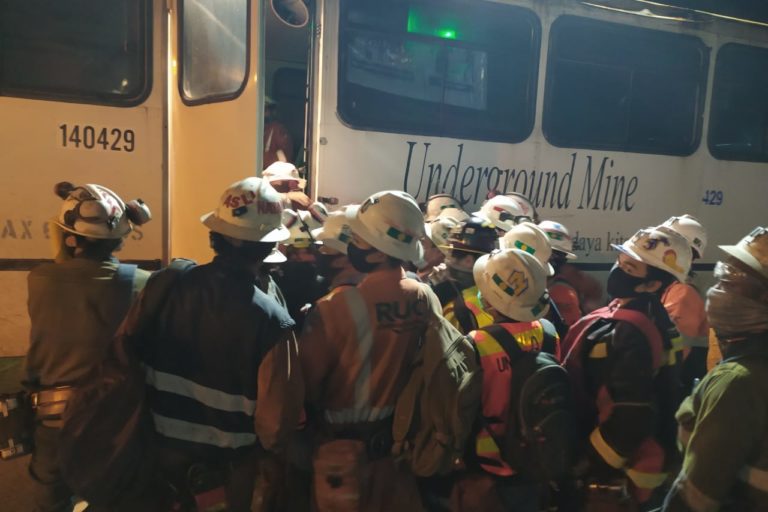 “We feel uncomfortable and confused,” he added. “It’s a lot of pressure.”

Banner: The Grasberg mine in Papua. Image by Richard Jones/Flickr.