Philip Jacobson, an American editor for the non-profit environmental news platform Mongabay, was deported from Indonesia today, January 31, more than six weeks after authorities in the city of Palangkaraya detained him over an alleged visa violation.

Jacobson, who turned 31 on January 26, was first detained on December 17, 2019, after attending a hearing between the Central Kalimantan Provincial Parliament and the local chapter of the Indigenous Peoples Alliance of the Archipelago (AMAN), Indonesia’s largest indigenous rights advocacy group.

He had travelled to Palangkaraya after entering the country on a business visa for a series of meetings. A few hours before he was scheduled to fly out of the city, immigration authorities came to his guesthouse and confiscated his passport. The next day they questioned him for four hours and ordered him to remain in Palangkaraya pending their investigation.

More than a month later, on January 21, Jacobson was formally arrested and taken into custody at the Palangkaraya Class II Detention Center. He was informed that he faced charges of violating the 2011 immigration law and a prison sentence of up to five years.

After his arrest, Jacobson’s case attracted global attention, with hundreds of articles published in outlets around the world, from The New York Times to the The Wall Street Journal to Indonesian newspapers. Thousands of supportive messages appeared across Twitter, Facebook, and Instagram under hashtags like #FreePhilJacobson, #FreePhil, and #BebaskanPhilipJacobson.

On January 24, Coordinating Minister for Political, Legal and Security Affairs Mahfud MD told media he would order Jacobson to be deported “immediately,” and later that day he was transferred back to “city arrest.” A week later he was allowed to leave the country.

“We are relieved that Phil has finally been granted his freedom,” Mongabay Founder and CEO Rhett A. Butler said. “His prolonged detention over this matter was profoundly concerning, but we are very pleased that authorities dismissed the charges and released him.”

“I am extremely grateful to everyone who helped us free Phil, including members of Congress in the United States, officials in Indonesia, civil society groups, and colleagues, friends, and family. We’re thankful for the work of his lead defense counsel, Parlin Bayu Hutabarat of Pakpahan Hutabarat Law Office and Aryo Nugroho of the Legal Aid Institute (LBH) Palangkaraya.”

“We will appeal to the Indonesian government directly to ensure Mongabay journalists from abroad are able to obtain the correct visa to continue playing their important role in contributing toward sustainable economic development in the country.”

On being released, Jacobson said:

“It’s good to be out of prison and I’m relieved the prospect of a five-year jail sentence is no longer something I have to contemplate. I am very grateful to all those who worked hard to resolve this situation, including coordinating minister Mahfud MD and other Indonesian politicians and individuals who went out of their way to highlight the importance of work done by the press. I appreciate that a lot of people have expended time and energy on my behalf — please accept my sincere thanks for your efforts and apologies for the trouble. I owe you all.”

“At the same time, I am deeply saddened to be deported from the country. Indonesia is a magnificent country with a big heart, full of some of the funniest and most generous people on Earth. I am fortunate to have made some of my dearest friendships with people from around the archipelago.”

“The journalists at Mongabay are here to inform our readers about what is happening to our environment. There has never been a more urgent time to do this. Indonesia has received praise in the last few years for its efforts to combat climate change and curb deforestation, positive developments that Mongabay has covered. Meanwhile, the press has a duty to cast a critical eye on events. There are many fantastic Indonesian reporters, but, as is the case everywhere, foreign journalists also have an essential role to play in telling stories from Indonesia to the rest of the world.”

“In the interest of contributing to this, and to avoid future misunderstandings, I will be applying for a new journalism visa at an Indonesian embassy at the earliest opportunity. I look forward to returning to Indonesia as soon as possible.”

Summary: Philip Jacobson is an employee of Mongabay, a non-profit environmental science and conservation news organization. Jacobson is an editor for Mongabay and splits his time between Indonesia and his native U.S. This document outlines events culminating in Jacobson’s detention in the Indonesian city of Palangkaraya, Central Kalimantan on the island of Borneo.

December 14, 2019: Jacobson, traveling on a multiple-entry business visa, arrived in Palangkaraya, the capital city of Central Kalimantan province, to meet with the local chapter of the Indigenous Peoples Alliance of the Archipelago (AMAN), an indigenous rights advocacy group.

December 16: Jacobson attended a dialogue at the parliament building between the Central Kalimantan parliament and the local chapter of AMAN.

December 17: Jacobson was scheduled on a flight out of Palangkaraya, but before he could leave for the airport, immigration officers went to his guesthouse and confiscated his passport. The officials ordered Jacobson to come in the next day for questioning. It later became clear that someone had photographed Jacobson at the parliament building and reported him to immigration.

December 18: Jacobson was interrogated at the immigration office about his activities. Authorities took an official statement, known as a BAP, and ordered Jacobson to remain in Palangkaraya while they continued their investigation.

December 24: Jacobson missed his international flight out of Indonesia.

January 9, 2020: Jacobson was summoned to the immigration office, where he received a formal letter saying he was suspected of committing a visa violation and was being investigated. Authorities stated that as long as Jacobson remained cooperative, he would remain under city arrest, rather than detained in an immigration cell.

January 21: Immigration officers appeared at Jacobson’s guesthouse room and instructed him to pack his belongings and come with them. Following another round of questioning, he was taken into custody and transferred to a detention center.

January 22: Jacobson and his colleagues were honored with the Fetisov Journalism Award for their work on an investigative report, produced in collaboration with Indonesia’s Tempo magazine, Malaysiakini and The Gecko Project, about a plan to create the world’s largest oil palm plantation on the island of New Guinea. Jacobson had been expected to attend the awards ceremony in Switzerland before he was barred from leaving Palangkaraya.

January 24: Coordinating Minister for Political, Legal and Security Affairs Mahfud MD told reporters in Jakarta that he would order Jacobson to be deported from Indonesia “immediately.” Later that day, Jacobson’s local lawyers negotiated his transfer from prison back to “city arrest,” and he was allowed to return to a guesthouse.

January 31: Jacobson, escorted by three immigration officers, departed Palangkaraya for Jakarta. On arrival at Jakarta’s international airport he was immediately detained at the immigration holding area until he departed several hours later for the United States. Before departure, he was informed that the charges against him had been formally dropped (with the issuance of an SP3 letter). He was informed he would be temporarily blacklisted from entering Indonesia but was not given a specific timeframe.

Committee to Protect Journalists (CPJ) [January 22]:  “The longer journalist Philip Jacobson remains held in detention, the more damage Indonesia does to its reputation as a democracy with a free press,” said Shawn Crispin, CPJ’s senior Southeast Asia representative. “Indonesian authorities should release Jacobson immediately and cease pursuing a criminal case against him.”

Reporters Without Borders (RSF) [January 22]: “Phillip Jacobson’s totally disproportionate arrest clearly amounts to intimidation,” said Daniel Bastard, the head of RSF’s Asia-Pacific desk. “The Central Kalimantan immigration officials have massively overstepped their powers. We call on the Ministry of Law and Human Rights, which oversees the Directorate General of Immigration, to ensure that this journalist is immediately released in accordance with the rule of law.”

The International Press Institute (IPI) [January 22]: “Indonesia should immediately release Philip Jacobson and drop any travel restrictions against him”, IPI Director of Advocacy Ravi R. Prasad said. “The harassment of journalists is unacceptable in Indonesia, which claims to be a democracy that respects press freedom.”

Society of Environmental Journalists (SEJ) [January 22]  “Employees of the news media should be free to work in Indonesia without fear of arbitrary detention,” SEJ President Meera Subramanian said. “Actions like those taken against Mr. Jacobson harm the health of Indonesian democracy and the country’s global reputation.”

Alliance of Independent Journalists (AJI) [January 23]: “The criminalisation of Jacobson is an excessive action . . . The immigration office had no authority to detain and treat him like a criminal offender following the allegation of violating an administrative matter.”

International Federation of Journalists (IFJ) [January 23]: “The detention of Jacobson is unjust and excessive. This appears to be a retaliatory attempt to silence media reporting on sensitive topics. Journalism is not a crime and we strongly condemn attempts to criminalise journalists in Indonesia.”

PEN America [January 25]: “While we are relieved that Philip has been temporarily released, we remain concerned that he is being targeted for his work in an attempt to send a warning signal to those journalists and news outlets who undertake investigative reporting on sensitive topics in Indonesia,” said Karin Karlekar, director of Free Expression at Risk Programs at PEN America. “Even if there is evidence of a visa-related violation, it should be handled as an administrative rather than a criminal matter and be resolved as quickly as possible, and we call on the authorities to allow both Indonesian and foreign journalists to work freely and without fear of retaliation.”

Additional images available for use 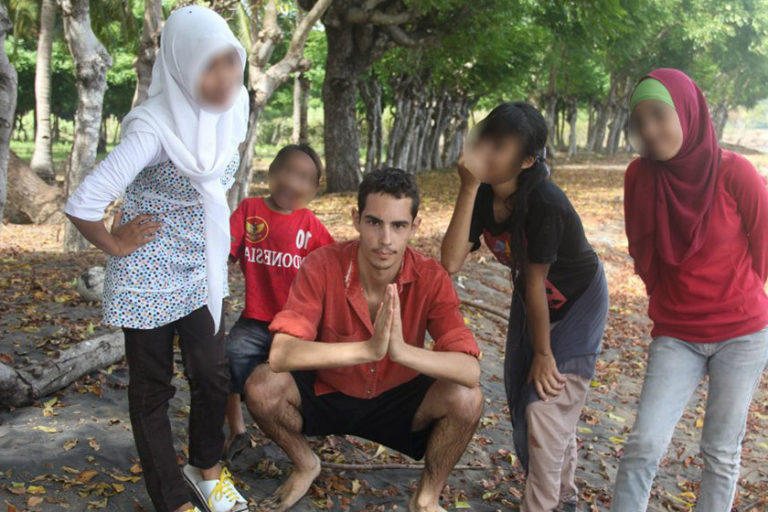