Saving a Philippine tree last seen a century ago

MANILA — In 1915, a taxonomist recorded the existence of a tree known locally as kaladis narig (Vatica elliptica) in the forests of Zamboanga Sibugay, a province in the Philippines’ southern island of Mindanao. Tall, if not particularly handsome, the tropical hardwood species was endemic to the province and was already classified as nearly extinct. For more than a hundred years, it was thought to be well and truly gone — until now.

Rediscovering it, however, was like looking for a needle in a haystack. The search, spearheaded by Philippine geothermal giant the Energy Development Corporation (EDC), began sometime in 2009, the same year that the company launched BINHI, a nationwide replanting program that was a part of its corporate social responsibility (CSR) initiative. “The kaladis [narig] was already ‘nearly extinct’ in 1915,” said Roniño Gibe of the EDC. “We were aware that there was a high chance that it was already extinct and that we might be looking for a tree that didn’t exist anymore.”

Mindanao remains a hotbed of the long-simmering Islamist insurgency in the southern Philippines, but despite the security risks, members of the EDC took a trip to Zamboanga Sibugay in search of the fabled tree. The literature indicated that the tree could only be found in Naga, a municipality in the province. As exciting as a discovery might have been, however, the expedition turned up with nothing. The kaladis narig recorded more than a hundred years ago was no longer in the area.

The team went home disappointed and focused its attention on supporting the Department of Environment and Natural Resources (DENR) in updating the national red list, the country’s conservation bible. When it comes to trees, the EDC is the sole Philippine partner for Botanic Garden Conservation International, a U.K.-based charity, in updating the conservation status of tree species in the country.

“Part of our project is to propagate the seedlings of species that the DENR labeled as endangered and of course, we focused on the critically endangered species,” Gibe said. “We chose 13 species to focus on and that includes the kaladis narig.”

Updating the records, while a gargantuan task considering the limited literature on local species in the first place, was crucial. Of the 179 critically endangered tree species in the Philippines, 94 percent are endemic to the country, and the elusive kaladis narig is one of 16 dipterocarps, a family of tropical hardwoods, listed as critically endangered on the national red list. 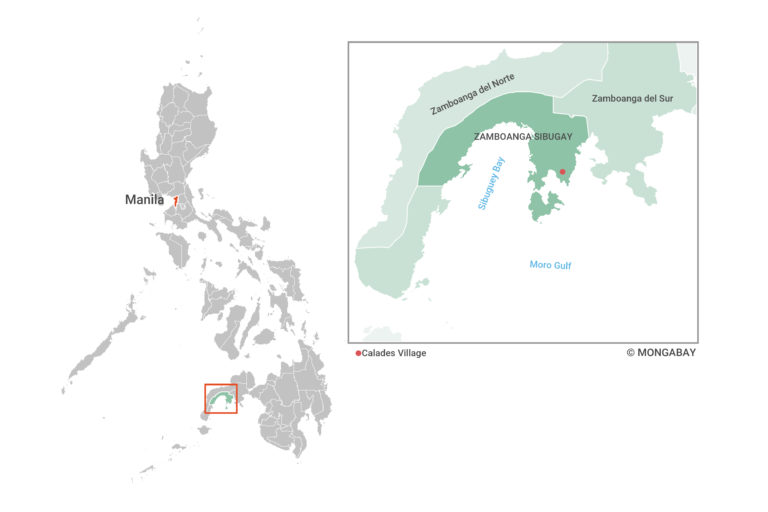 Even with so much on its plate, however, the team still couldn’t help but keep an eye out for the kaladis narig. That devotion eventually paid off when, after five years, the team found two trees along a creek in a town that, fittingly, bore the same name as the elusive tree: Barangay Calades, or Calades village, in the municipality of Alicia in Zamboanga Sibugay province.

But how sure were Gibe and his team that it was the same species of tree described in the 1915 literature? After all, nobody had recorded an observation of it since 1915, and even the environment department had been unable to assess the species’ status. “We have a taxonomist from the University of the Philippines-Los Baños [UPLB] who verified that it’s the tree we’re looking for,” Gibe said.

The struggle for survival

Compared to other tropical hardwoods in the Philippines, the kaladis narig doesn’t particularly stand out, Gibe said: “It’s not exactly aesthetically pleasing.” However, it’s quite tall, and has a girth of 10 centimeters (4 inches), semi-mature by tree standards. It’s also resilient and played a pivotal role in the construction of houses in the village in the past.

Gibe said locals told them the village was named after the tree, which once covered the whole village. Losing the kaladis narig wouldn’t just mean losing an important part of the country’s identity, but also its rich history as part of a biodiverse ecosystem.

The next step for conservation was on: to protect the two trees and propagate them through cloning technology. Technically, all trees have the capability to reproduce asexually, and this process can also be induced under the right conditions. In a process known as vegetative material reproduction (VMR), the group took cuttings from the trees and brought them to the EDC’s nursery in Antipolo, a city an hour’s drive away from the capital Manila, where they tried to nurture the shoots.

However, cuttings don’t always, well, cut it. Due to the dearth of research on the tree, the kaladis narig proved notoriously difficult to propagate. In the years since the rediscovery, efforts have been made to propagate the species, but to no avail.

“We collected cuttings; we collected specimens — some of which we gave to the community and DENR, some we brought back to Manila,” Gibe said. “We kept on adjusting the [soil] moisture in the nursery so it’s the same as the one in Zamboanga Sibugay but still, none survived.”

As if to rub salt into the wound, a return trip to the forest in 2017 revealed that one of the two kaladis narig trees had been cut down. Now the race to save the last known tree, found nowhere else in the Philippines or in the world, had taken a more urgent turn.

If the endangered tree species were to be saved, it would require every ounce of cooperation from every stakeholder involved, especially the community named after the tree.

In the beginning, the residents of Barangay Calades were aloof toward the team, according to Gibe. “They looked at us differently. They wouldn’t cooperate when we inquired about the tree. They assumed we were just treasure hunting.” Only two to three people, all paid for their time, accompanied them to scout the area for the trees.

But the team’s persistence, combined with a campaign to impress on the locals the importance of the tree, won over the local skeptics. These days, as many as eight join the team at any one time — and they do so without pay.

Gibe said he believes the fact that there are so few of these trees left and that they can only be found in that specific part of the country is finally sinking in. There’s also the sense that the locals enjoy taking part in the conservation effort because it gives them a feeling of shared purpose and identity.

Ultimately, however, what is pushing the community to take care of their backyard is as simple and as poignant as their own survival: Without trees, there can be no harvest. Without a harvest, there can be no source of food or income. It almost seems poetic that restoring that which gave the barangay its name could very well be the key to its future.

“That’s the reality,” Gibe said. “It’s not just the government or other private entities. If you want to encourage people to plant trees, you need to make them see that there’s an opportunity for entrepreneurship.”

The warming relationship between the team and the community, with both sides understanding that they were working toward the same goal, yielded a rich reward in 2017, when the team returned to the village and the locals told them they had found 10 more kaladis narig trees.

Right now, the Philippines only has 7 percent forest cover, but there is always hope for the environment and for an endangered tree species like the kaladis narig, especially when local communities start getting more involved.

An ordinance has been drafted to ensure the conservation of the trees, but protecting what little is left is proving to be a challenge. Much of the land surrounding the barangay has been turned into an agricultural area, and the only thicket left is located along the river. (The province is a major rubber production area with 210 hectares, about 520 acres, of old rubber trees and houses a rubber processing plant.)

That’s the same threat that hangs over other forests across the country. “Once a land has been converted for agricultural use, it’s bound to become a residential area later on,” Gibe said.

“We want to propagate [the] threatened species. Rescue first, then plant in safe-haven areas, and once we have planting materials, we’ll do massive reforestation of these species all over the Philippines,” Gibe added. “If we do that, maybe in the next five to 10 years, it’ll be removed from the threatened list, and tree-cutting can be regulated. The end goal is to bring back our natural forests and make them more sustainable. Later on, it can be part of the economy.”

The road to this goal appears likely to be full of obstacles. Beyond the immediate man-made threats, ecosystems throughout the Philippines still have to contend with climate change. In the past few years, the country has experienced severe bouts of drought and rain, affecting even tree-planting season.

This is one of the reasons why BINHI isn’t quick to plant a tree just anywhere. Instead, it conducts search-and-rescue operations for threatened plant species, which it tries to propagate in its nurseries. It then makes it a point to partner with private companies, individuals, communities and government entities to make sure the maintenance of the trees can actually be sustained.

The practice of planting in places deemed as safe havens — school grounds and tree parks — is also helping ensure the survival of endangered species. Some partner schools collect the seeds and turn them over to BINHI; others build their own nurseries or sell them.

Back in the nursery in Antipolo, the group’s decade-long effort to locate and save this tree has borne fruit: Of the 50 shoots it took this year, one managed to survive and has even produced two leaves. It is perhaps an indication that this hardwood species that once dominated this community in Zamboanga is determined to flourish.

“But just because we found other trees doesn’t mean that everything’s okay,” Gibe said. “Imagine we only have 11 trees of kaladis narig in the whole world. And it can only be found on one island, in one barangay, in the whole world.”

Banner image of a kaladis narig tree (Vatica elliptica) in a riparian area in the province of Zamboanga Sibugay in the Mindanao region. Image courtesy of EDC.