Microplastics may be a macro problem for the U.S. Great Plains, too, study finds

Over the past decade, the world has begun to realize that microscopic plastic particles infest our lakes, our seas, and even our bodies. A new study reveals that even the landlocked Great Plains haven’t escaped. Analyzing sediment and surface water from twenty-three streams, pools and reservoirs across Kansas, researchers from Emporia State University found microplastics in every sample.

Studies have found microplastics in the Swiss Alps, deep in the Mariana Trench, and in tap water across the globe, but this is the first time they’ve been documented in the Great Plains.

Formed from clothing microfibers, exfoliating microbeads, and the degraded fragments of larger plastic waste, microplastics were first recognized as an issue in the 1970s. Each particle can last for thousands of years, and with 80 metric tons of microbeads discharged into the ocean every year by the United Kingdom alone, the problem is only growing.

Although the dangers are still being studied, microplastics have already been shown to absorb pesticides and other toxic chemicals which can accumulate in the bodies of marine mammals, clogging their gills and filling their stomachs. The presence of microplastics can also change the physical properties of water, altering sediment permeability and heating and cooling rates.

The sediment sampled by the study contained a greater density of microplastics than the sampled water by several orders of magnitude: 128.7 pieces per 236 cm3 of sediment, and 0.37 in each five liter water sample, with an average of 64.5 pieces per sample.

While the paper acknowledges that urbanization and population density likely influence the extent of microplastic contamination, further analysis was beyond the study’s scope.

“We have a sample size of [about] 20, which isn’t enough to look at potential landscape-scale influences,” said lead author Dr. Erika Martin in an email sent to Mongabay. “I do think it is important to document that microplastics are in the Great Plains.”

The study is novel not only for its conclusions but for its methodology: the paper was researched and written by undergraduates at Emporia State University, with Martin’s editing and oversight. 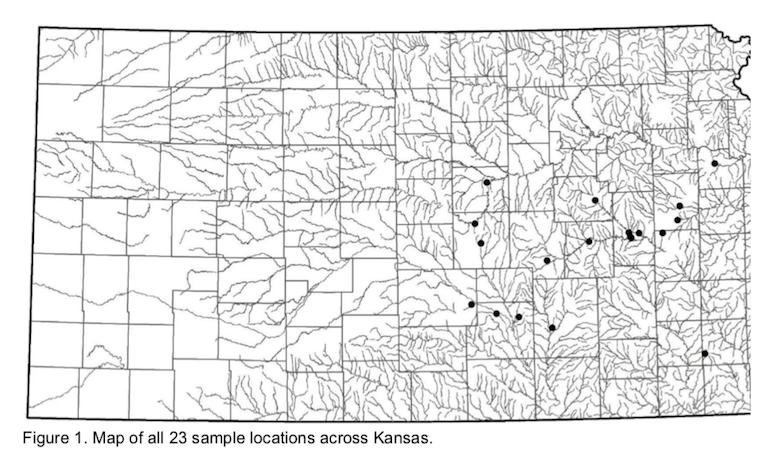 Modeled after the Course-based Undergraduate Research Experience proposed by Auchincloss et al. (2014), producing the paper was part of a freshman biology course intended to give students an engaging research task that would provide insight into the intimidating world of peer-review publishing.

“Before we started this project, I didn’t know what microplastics were (beyond cosmetic microbeads),” said Scott Nelson, one of the study’s undergraduate authors, via email. “I was surprised at this gap in knowledge, especially given the huge surge in environmental awareness we’ve seen lately. I think it’s crucial that we have a more comprehensive understanding of pollution that includes more than just Walmart bags and plastic straws.”

As well as giving the students new insights into the issue of microplastics, writing and publishing the paper was a new perspective on the process of peer-review, one that often seems inaccessible to undergraduates. “Academic papers seem very intimidating and elite,” said Nelson. “Being involved in the process showed me that that’s not entirely accurate. Behind every 30-page paper is a team of real people working on something they’re passionate about. It makes me think that I can do this, too.”

“It felt really normal at first,” said Khushi Ghanchi, another freshman author. “But then when I saw my name on that fully written and polished paper, ready to get published, I was really proud to have been a part of it. It was a great learning experience for me and I really enjoyed it.”

Both experiments were a huge success: “This is my first experience with microplastics, and I didn’t want to bias the results so I purposefully didn’t read what density microplastics had been found in other locations,” Dr. Martin said. “I looked at the student data, and then read other peer-reviewed publications to see how ours fit in. I couldn’t believe it! Not only was the density right on target with what we might expect, the pattern from sediment to water column was what others had found. I actually went to my department chair in disbelief and said ‘This is so good, it can’t be right. I must have done something wrong!’”

While Nelson, Ghanchi and the other student authors focus on their finals, Martin awaits news of a grant for continuing the project in collaboration with several other universities. And this next semester, Martin and a new batch of students will continue their investigations into Kansas’s waters, this time looking at the behavior of native fish species.