A four-year ox-cart ride around Madagascar: Q&A with Alexandre Poussin

When discovering a new country, most travelers are inclined to take the path well-trodden: a train ride, a road trip, perhaps a bike tour. French explorer and writer Alexandre Poussin, 49, and his wife, Sonia Poussin, 47, are not those people. The couple and their two children recently completed a four-year journey around Madagascar on foot and by oxcart.

The couple is no stranger to long walking expeditions. Between 2001 and 2004 they traversed the African continent from Cape Town in South Africa to the Sea of Galilee in Israel, covering almost 14,000 kilometers (8,700 miles). Their Madagascar trip, dubbed Madatrek, was different: this time they brought along their daughter, Philae, now 15, and son, Ulysse, now 12. 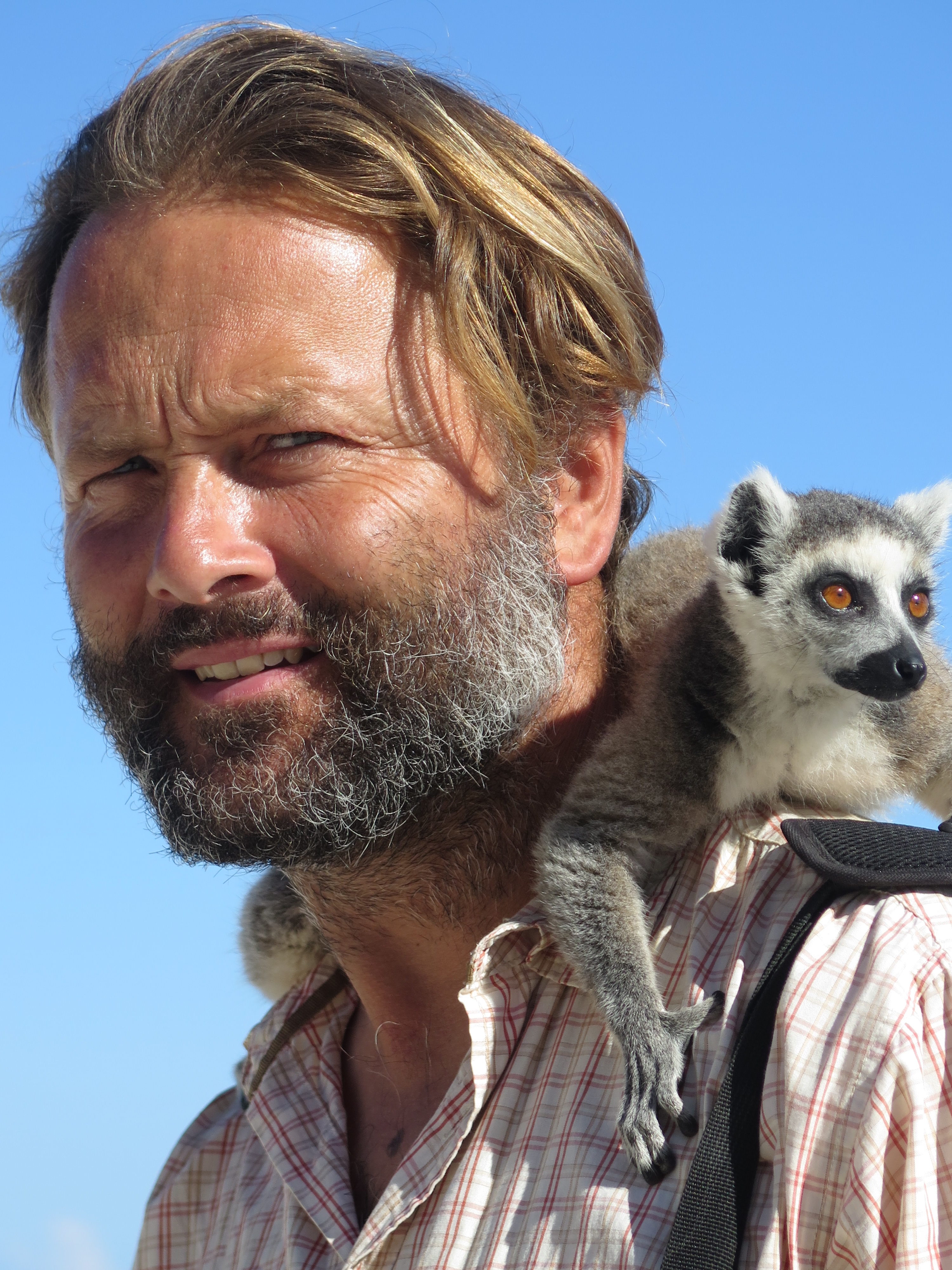 As a young man Poussin cycled across 35 countries and trekked the entire length of the Himalayan range, from Bhutan to Tajikistan, a trip of 5,000 kilometers (3,100 miles). Yet navigating a similar distance around the island of Madagascar seemed to him an “almost impossible” challenge, one that the family started in 2014. The physical toll of traveling on unpaved, muddy trails and camping outdoors was compounded by personal tragedy. Along the way, Alexandre and Sonia each lost a parent, amplifying their awareness of the “fragility of life,” he said.

During their quest to experience Madagascar, one of the poorest countries in Africa, they also raised about 400,000 euros ($448,000) for 31 humanitarian missions through fund-raising campaigns, according to Poussin. The self-funded adventures of the Poussin family were captured in a video series, and a book is due out soon. Poussin spoke to Mongabay about the family’s travels and travails, what makes Madagascar special, and what he sees as the threats to the island nation’s irreplaceable natural bounty.

Mongabay: For those who don’t know what Madatrek is, can you describe the mission?

Alexandre Poussin: Madatrek is the first attempt to go around the country with a traditional way of transportation used in the country by the people: the oxcart! Our original goal was to report about the actions of NGOs which try to deal with deforestation, malnutrition, education and, also, meet the private sector which is trying to find solutions and add value to local products. Madatrek is an overall study of the country and its people, that we try to reflect in our documentary series of 16 episodes of 52 minutes [each].

What is your most striking memory from the journey?

We had so many amazing moments in between hard and adventurous progress that it’s difficult to choose. But I can try recounting step-by-step what comes back to me.

Going down the Tsiribihina River, arriving at the Baobab Alley, is certainly a highlight that we reached six months into the journey. A first reward. And then less-trodden wonders: reaching the shipyard of Belo sur Mer and embarking on the Nofy Be, a traditional sailing boat. Crossing the Mikea forest, seeing Ankasy beach, diving on a 17th-century Portuguese wreck with 60 cannons, seeing the flamingoes of Tsimanampetsotsa, the Mahafaly tombs, the Antandroy war dances among cactuses and tortoises, the dancing lemurs of Berenty [reserve], the magical forest of Manafiafy near Fort Dauphin, were not bad either! Madagascar is a permanent festival! On the east coast, we experienced the Canal des Pangalanes, discovered the Vohibola forest hosting the smallest frog and the smallest chameleon* in the world, as well as the bizarre aye-aye.

We also saw what we think is the most beautiful national park in the country, in the mountains behind Sambava called Marojejy, which is home to the angelic white lemur [the silky sifaka, Propithecus candidus]. Then we enjoyed the north with all the spices and riches of the country: vanilla, pepper, vetiver [a perfume ingredient in the grass family], coconut, and cacao. Not to mention kitesurfing in Babaomby, rock climbing in the valley of parrots behind the Montagne des Français. Another dream was to discover the tsingys [jagged limestone formations] in Iharana in Ankarana national park. What a stone wonder with caves and subterranean rivers! 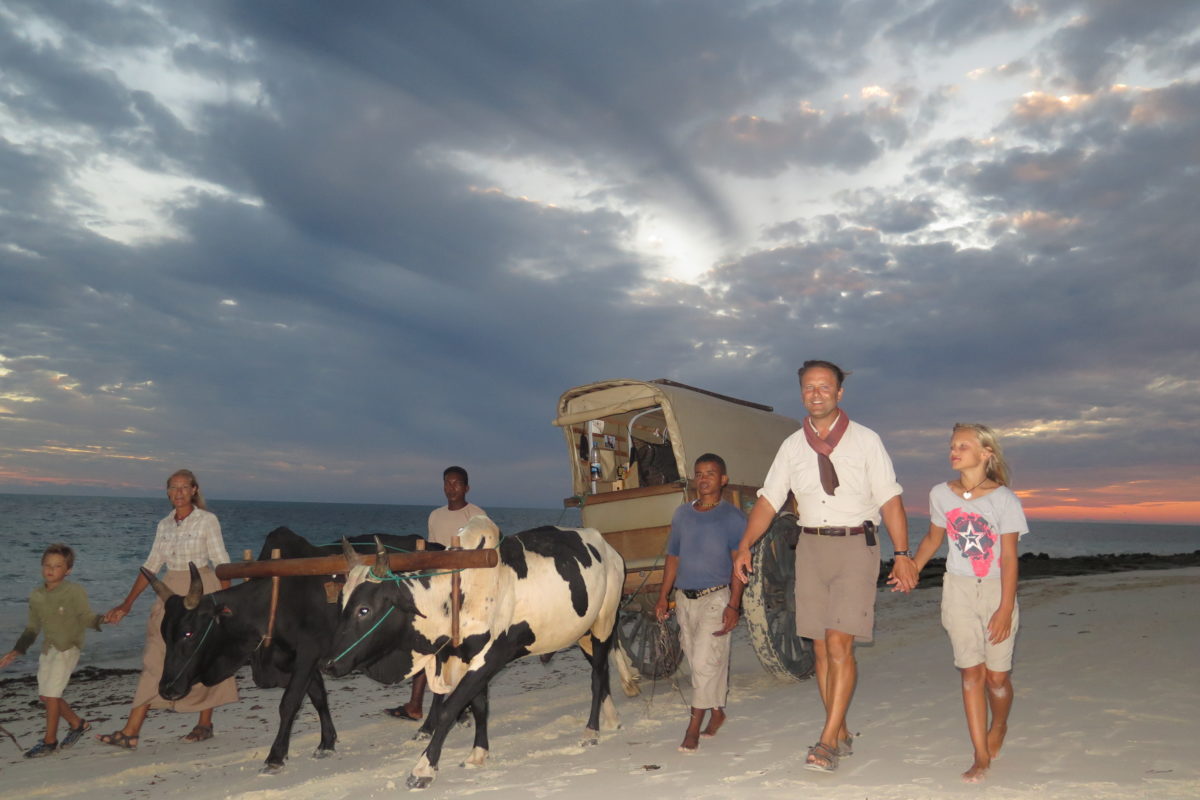 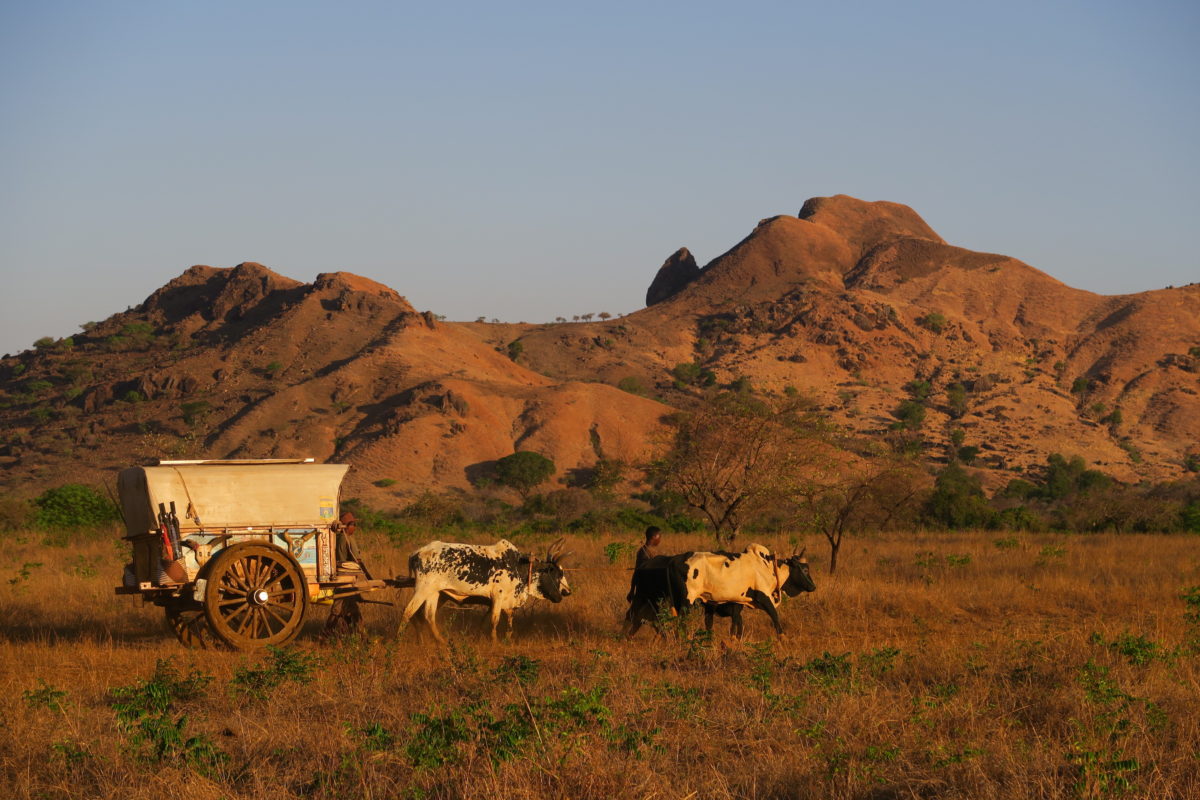 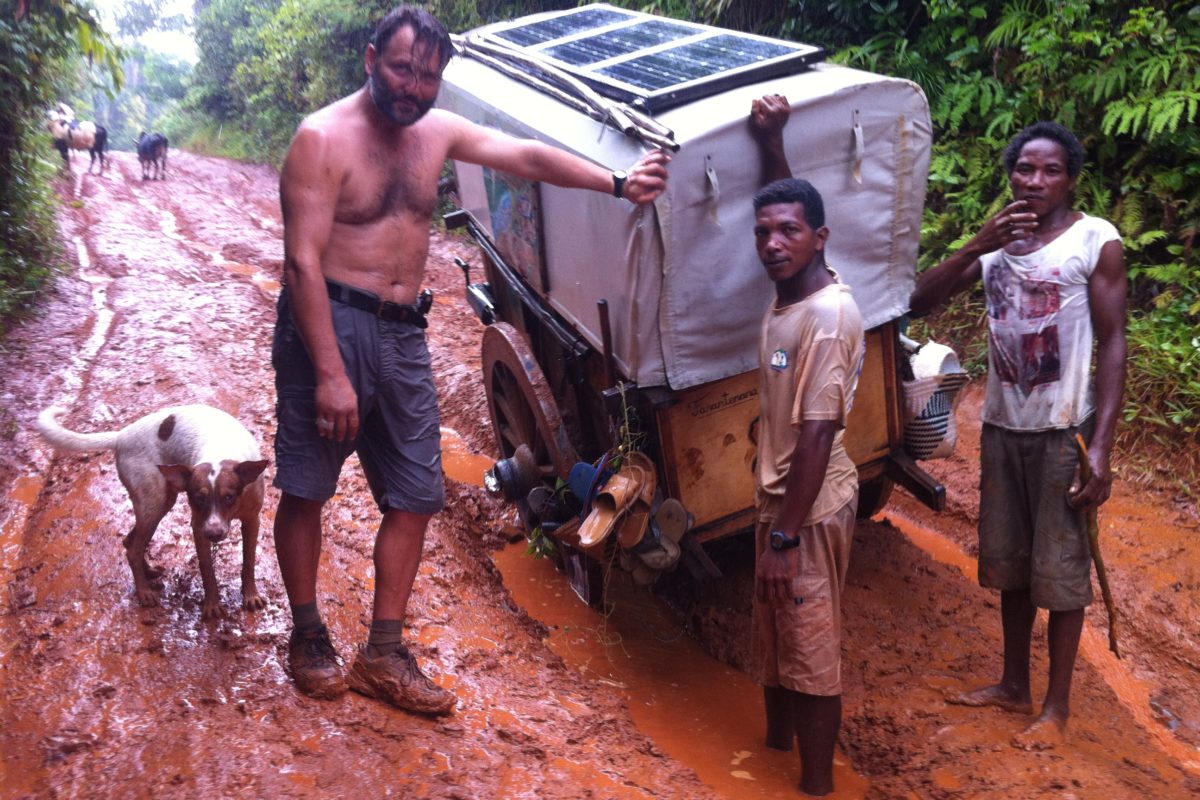 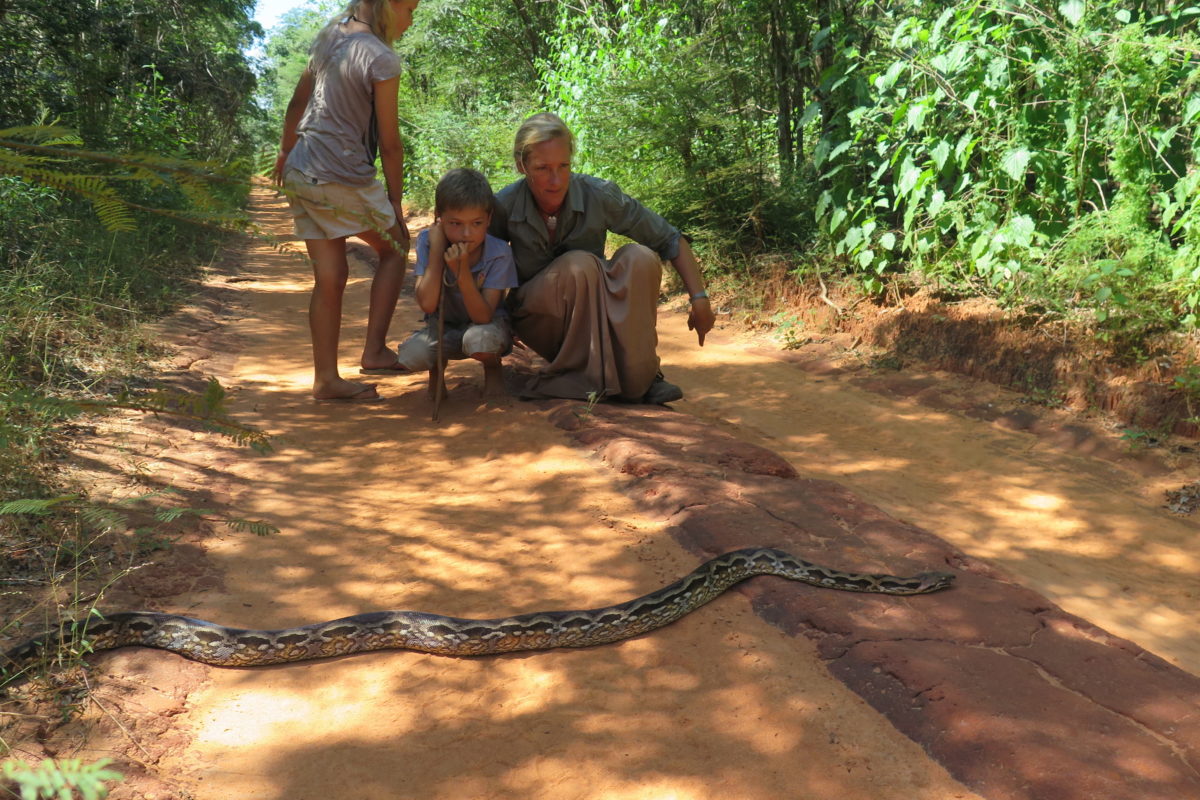 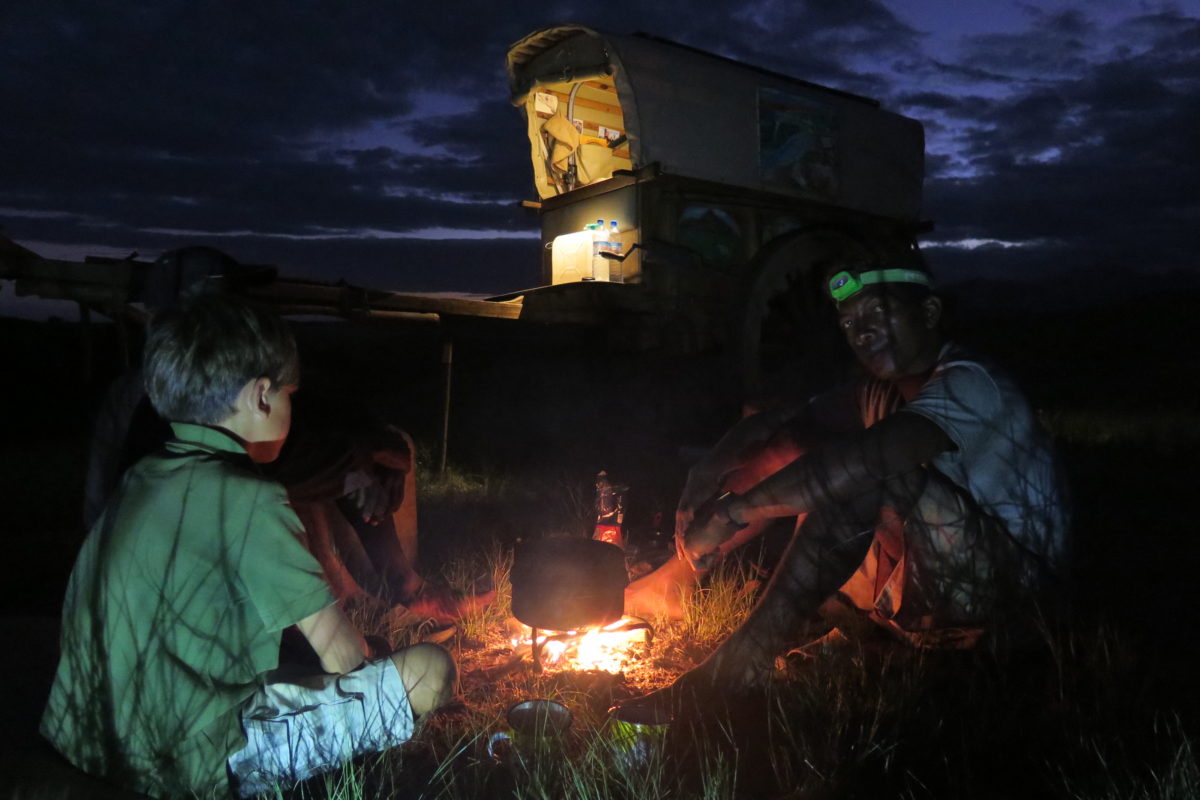 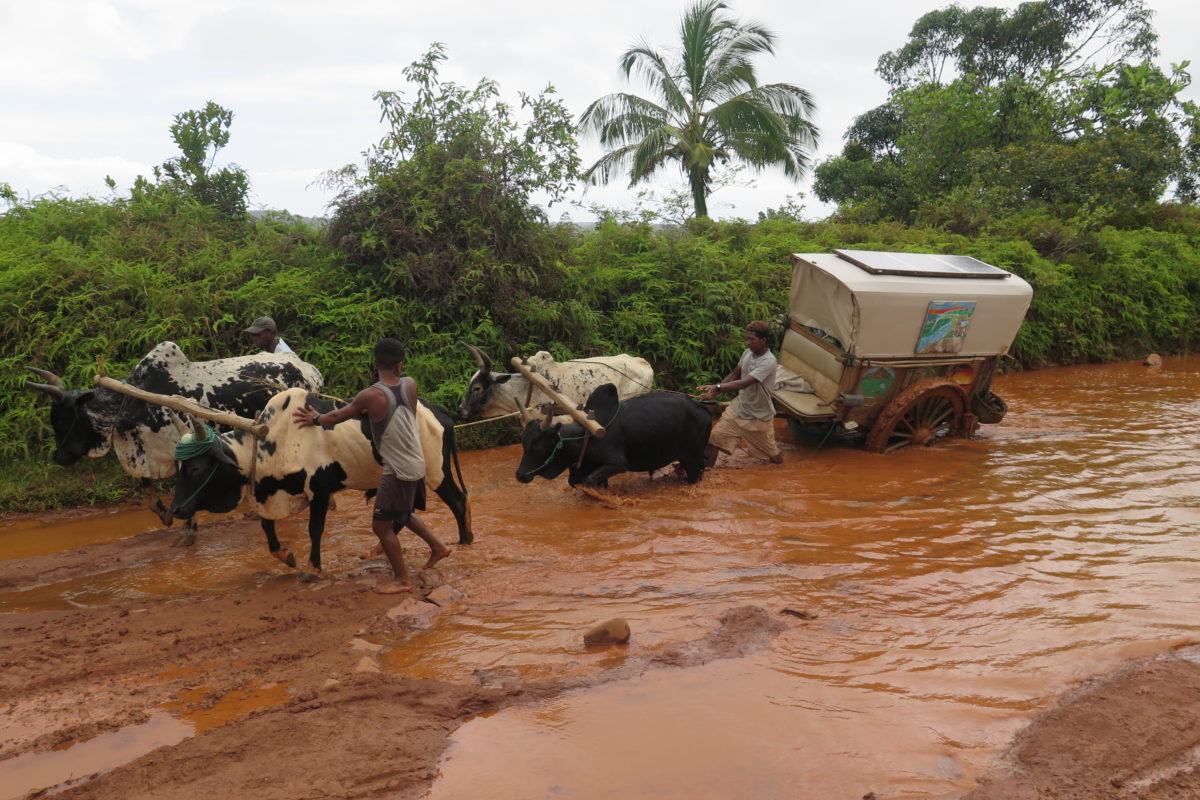 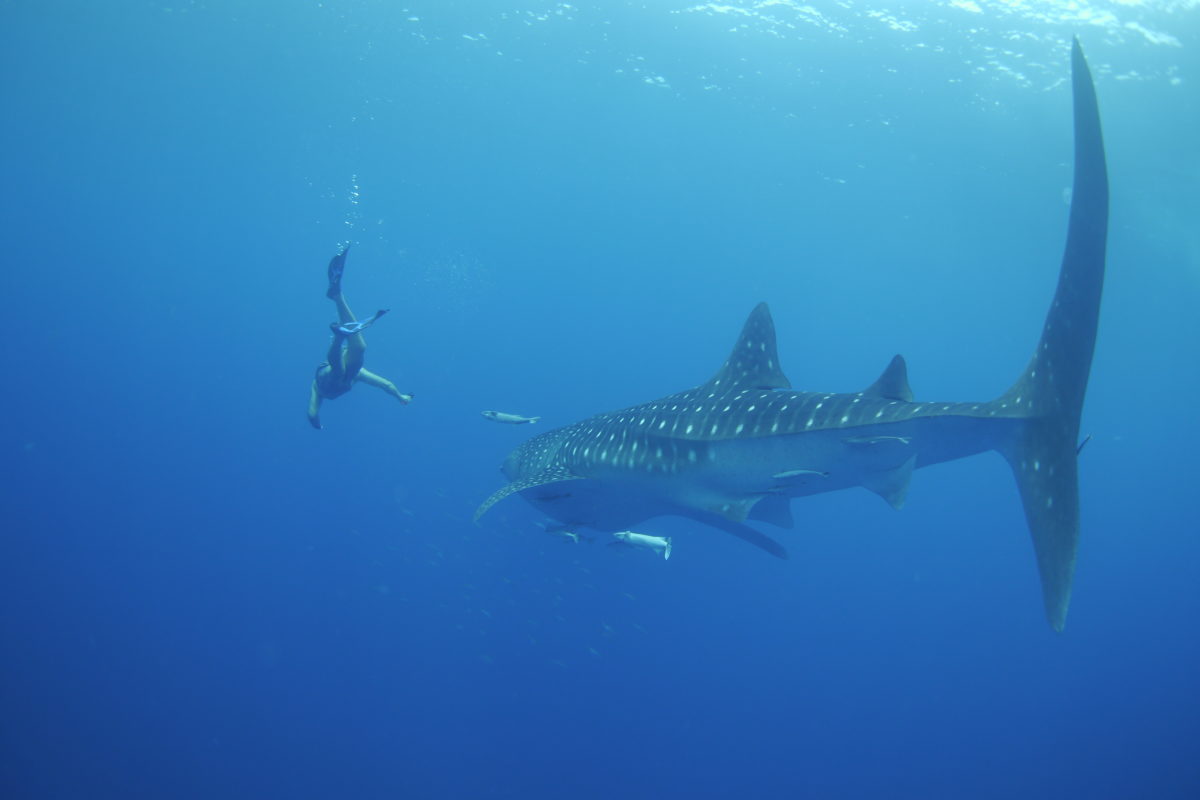 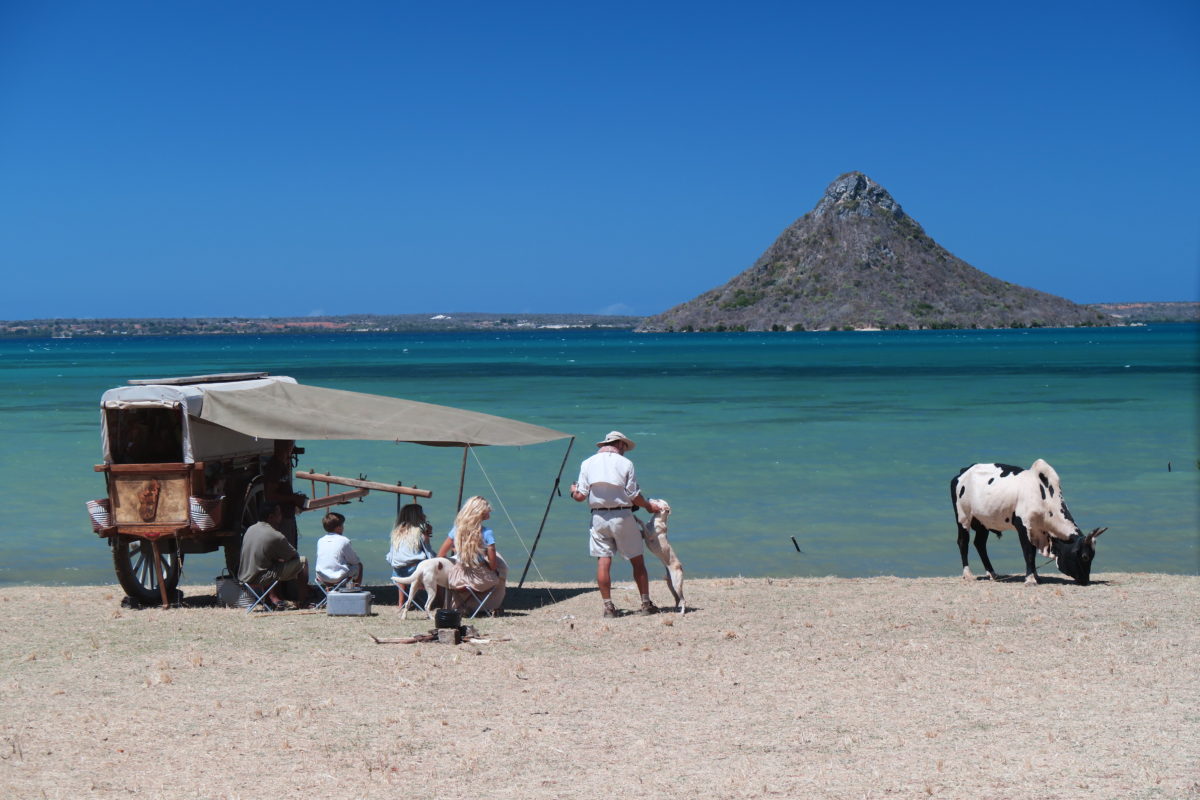 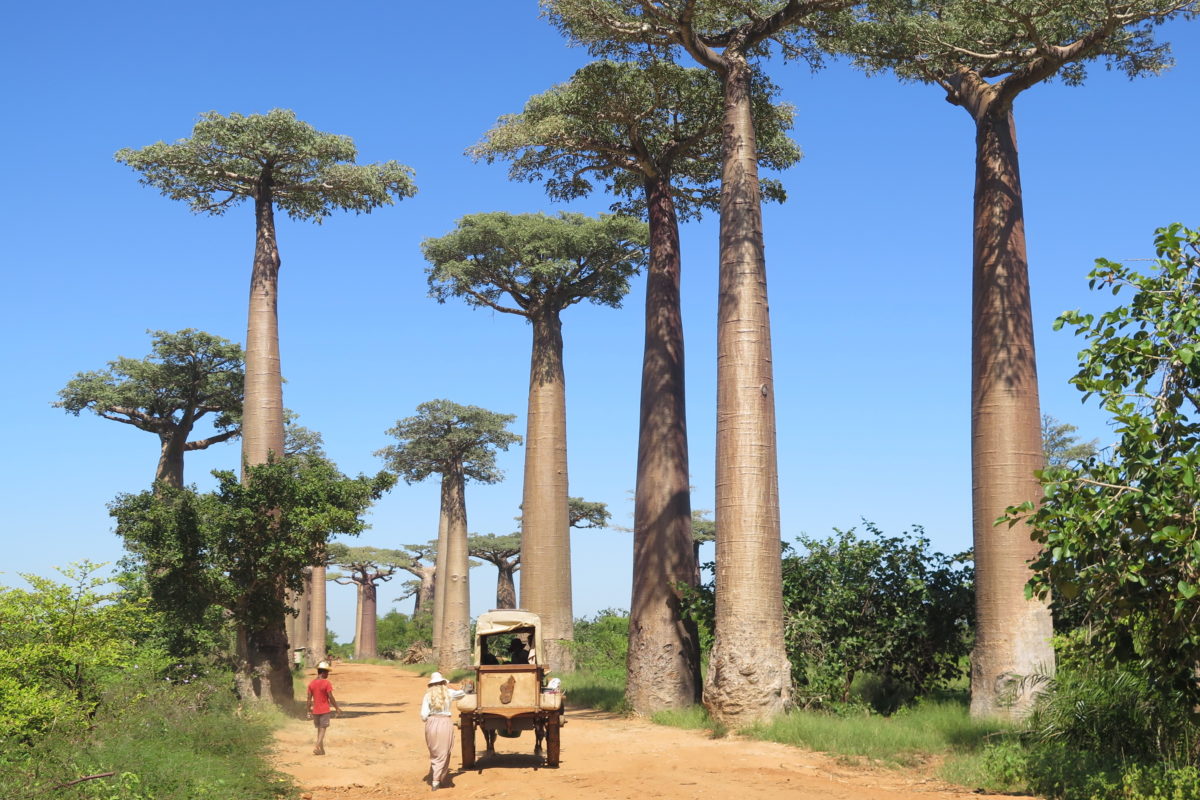 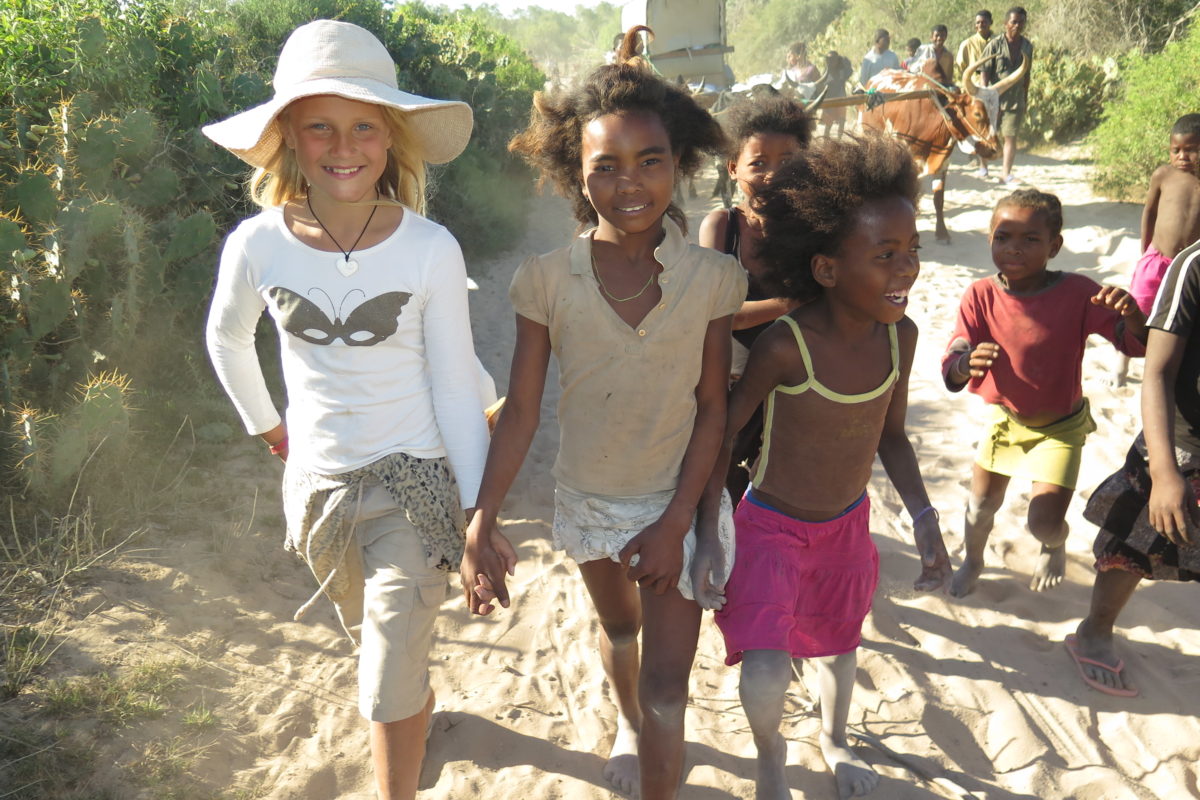 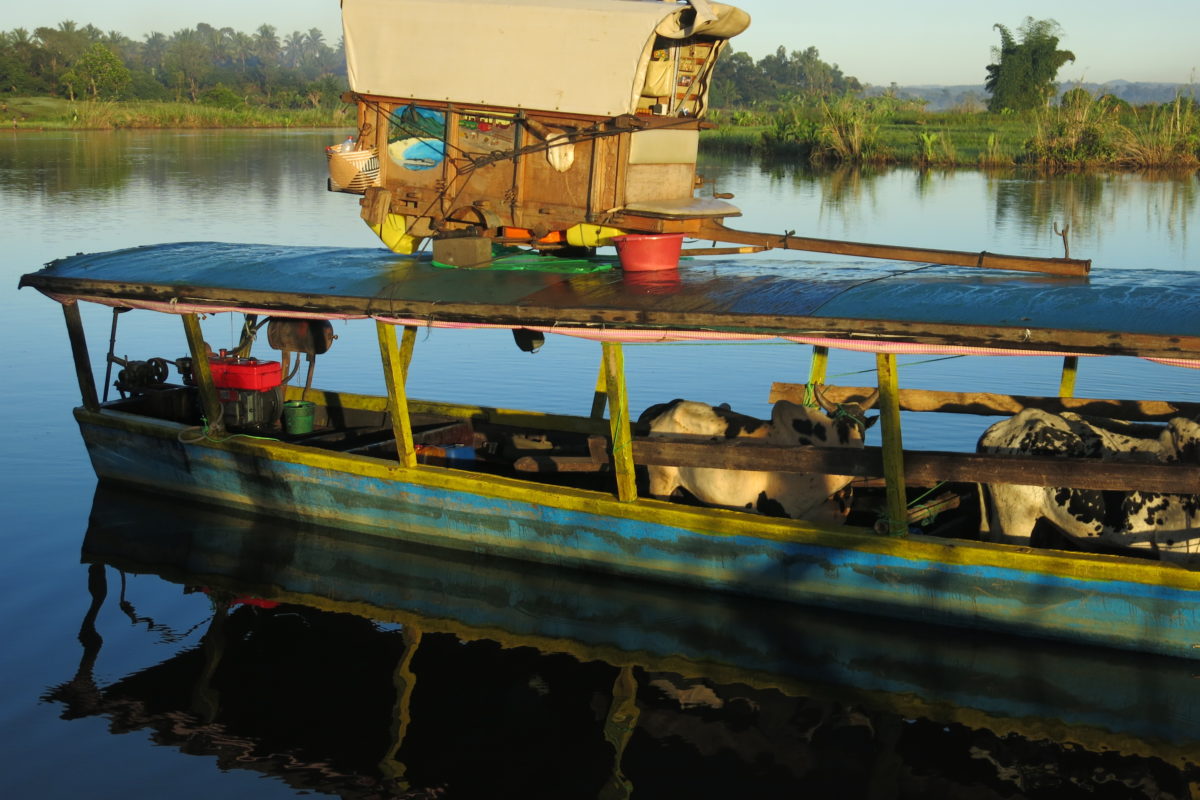 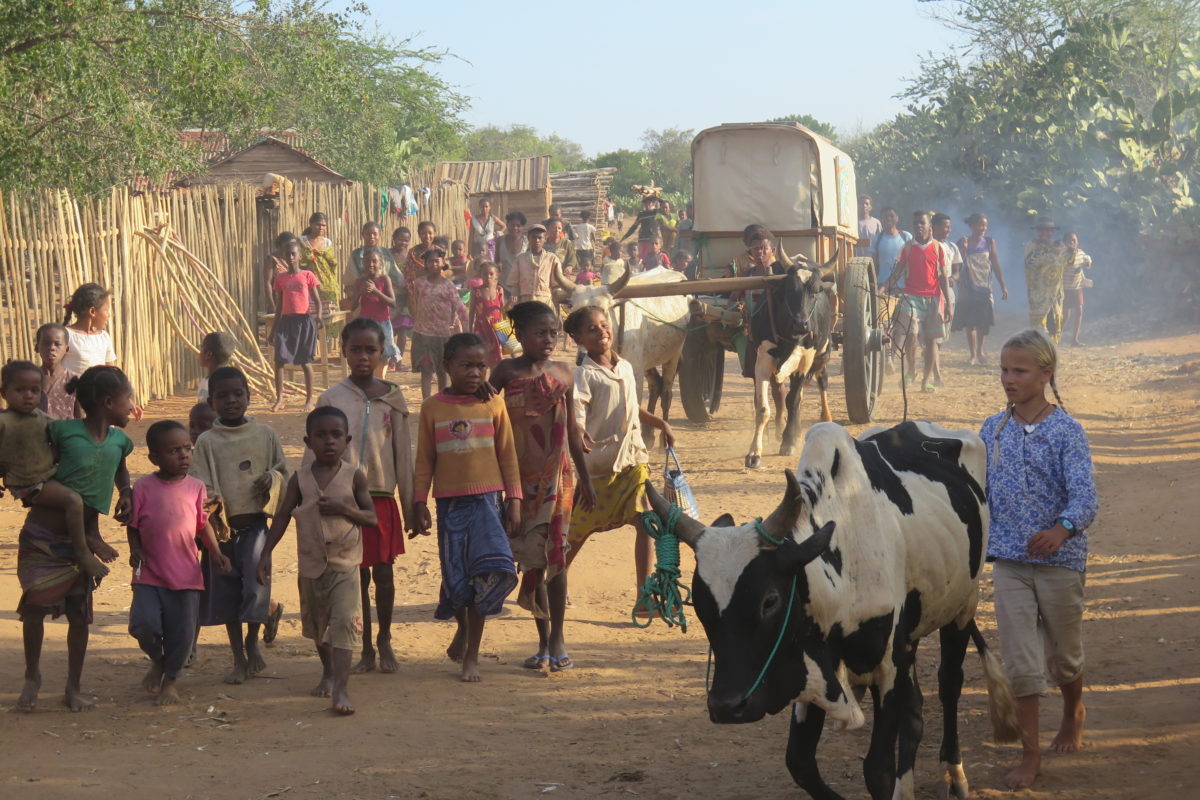 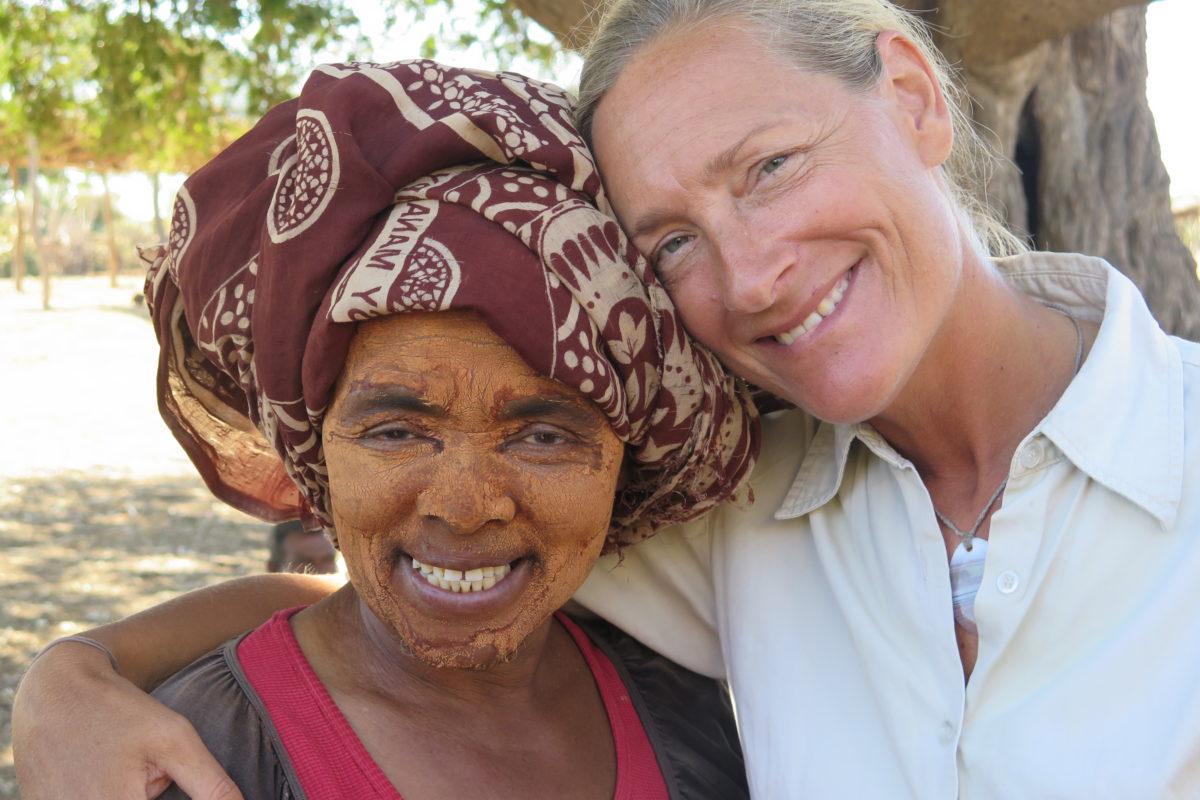 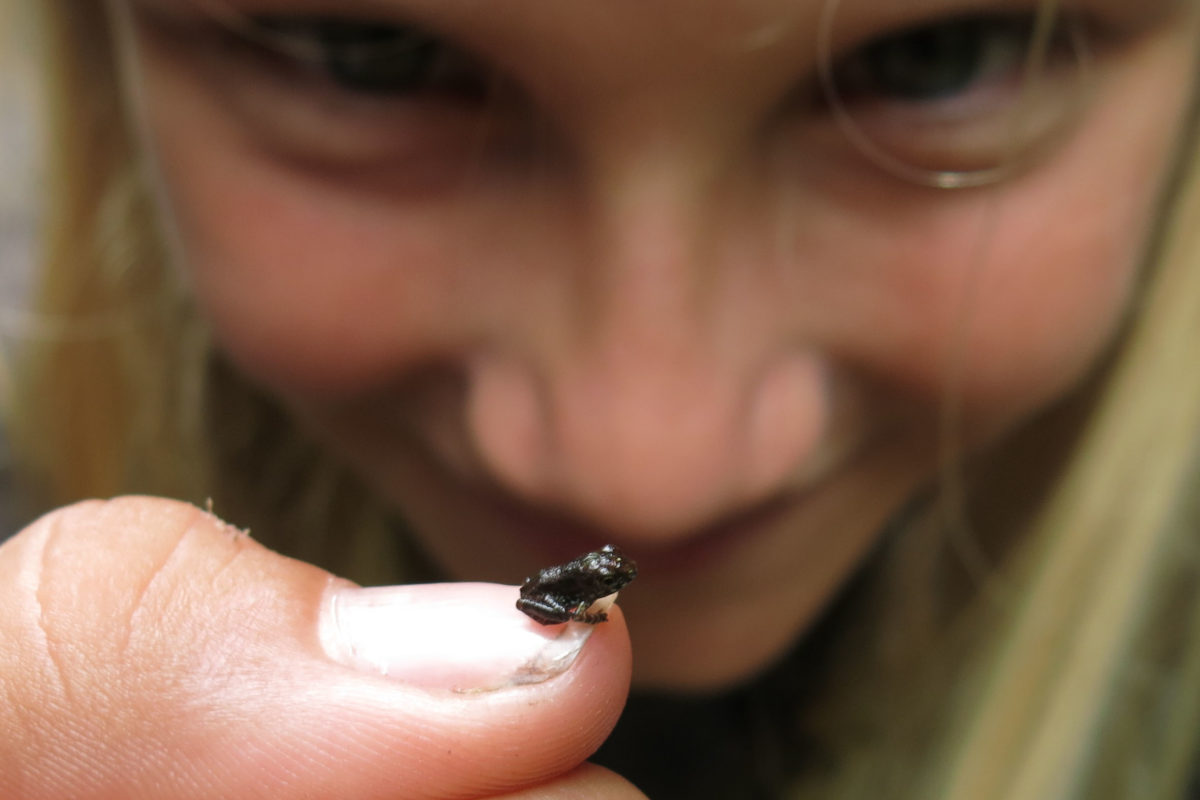 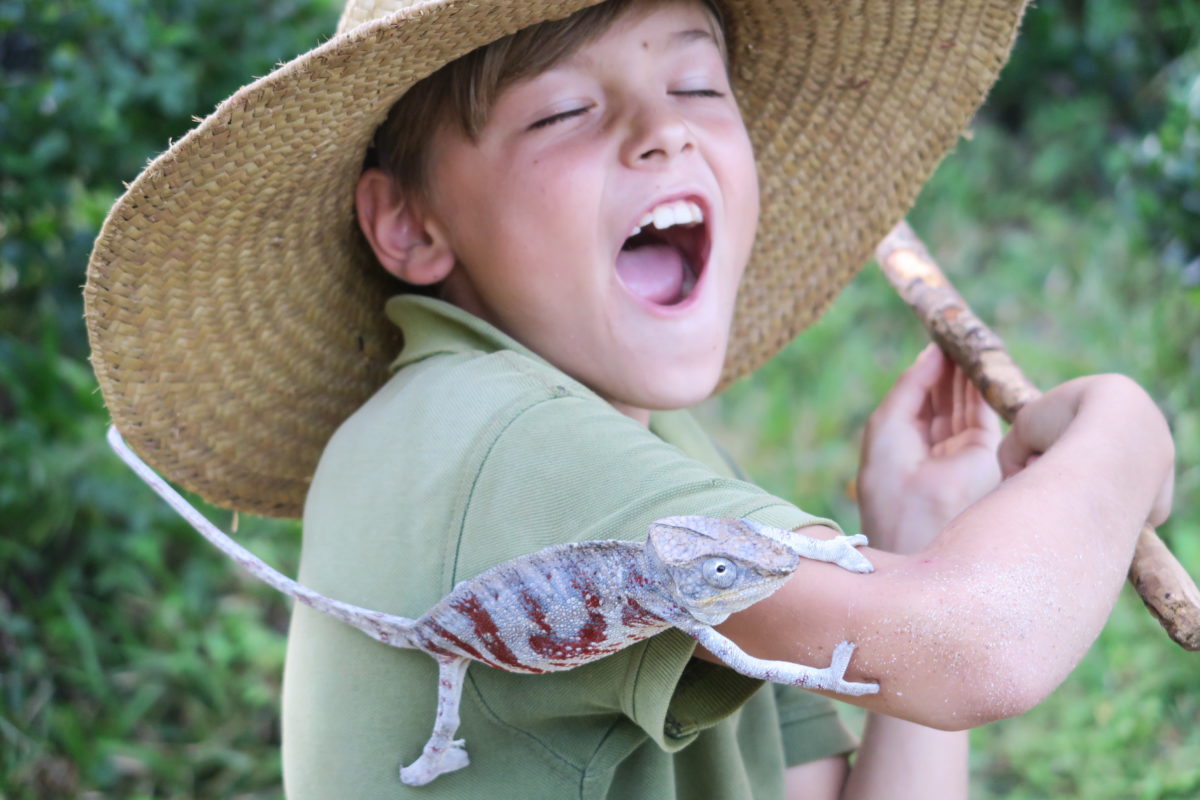 Diving with the whale sharks probably impressed us the most, but swimming with giant turtles and witnessing the birth of a hundred babies rushing to the sea was not bad either. Sailing to the Radama Islands on an Arab dhow, reaching Moramba Bay and its tsingys covered by baobabs, is certainly a must-see. Discovering the great Circus of the Mahajamba, and finishing our journey circling seven times around the great Mahajanga baobab sealed the pledge to come back.

There are so many more things to see, including the Makay, the Isalo, the Andringitra, the Tsaratanana, but this time without our oxcart!

What was the most heartbreaking moment during your trip?

We both lost a parent during our journey. It really opened our eyes to the fragility of life, that we were witnessing around us. We have seen babies and elders dying of neglect and lack of care, people from all ages suffering from diseases that have disappeared from the rest of the world: plague, cholera, and abscesses and skin afflictions you can’t dream of in your worst nightmares. One little girl called Teza who died just after a medical mission in which we took part embodies all the pain of the people.

What were the biggest hurdles in navigating Madagascar? Did you ever feel like giving up?

Hurdles are all over. It’s very difficult, almost impossible to go around in this country. It is still today very impenetrable and unknown. On top of that, the country is closed six months per year because of the heavy rains that transform every single path into a mudbath! Definitely, mud is the hardest experience; it becomes very, very difficult to progress. Even walking was exhausting because it was slippery. You are dirty, it’s hot, humid and you can hardly wash.

In some areas dahalos [cattle thieves] were around so it was a bit stressful because we had zebus [traditional humped cattle]. But it was so surprising for them that after a bit of discussion they left us in peace. The truth is that there was always something to slow us down. Going forward in Madagascar is very ambitious.

What was the experience like for your family, particularly your children?

I believe children only want to be with their parents. They are very adaptable. They really coped well with the hardship and deprivations. Not bathing was not a big issue for them! Not changing clothes either!

They learned to be happy with very few things, to get along together, to interact with different children almost every day, to understand the real hardships of their lives, the chance they had to be born in France, the fragility of a society as well as an ecosystem. That everybody has to care. They developed a precocious social entrepreneurship as well as an environmental consciousness. They ought to become activists in that field. I wouldn’t be surprised.

You helped a few dozen NGOs along the way. How did that come about?

We met people with key projects in search of finance and solutions; we became go-betweens to answer these needs. And it gave an extra meaning to our endeavor. We then helped to restore the Berenty forest, the last haven for sifakas [a kind of lemur] in the south; provided an X-ray [machine] in Manakara; built a dispensary in Berevo for a Polish nun; financed lots of classrooms all over and a canteen for street children; four houses for Akamasoa (under the care of Father Pedro); a maternity ward for Vohemar; and found money to dig boreholes. Up to now, a total of 400,000 euros, collected through crowdfunding, private donations and local businesses have been dispatched to 31 projects.

It is, of course, a combination of factors. The first to blame is poverty. But who can blame poverty? Forests are destroyed to clear soil for subsistence farming, burnt down for grazing, logged down for providing timber for the cities, which need it for building, scaffolding, or illegal exportation. But after all, or before all I should say, the first reason to me: to feed the country with charcoal. [In Madagascar] 28 million people cook with charcoal, and this, unfortunately, won’t change in a snap of the finger. And green charcoal takes time to grow, and rarely reaches maturity because of tavy [a slash-and-burn technique used in Madagascar], the cultural and seasonal grassfires among other things.

You are encouraging more tourists to visit. Do you believe that growing tourism will help Madagascar, and in what way?

My point of view is that all the forests of the country will disappear in a very short time except the protected national parks and private parks. And these will continue to be threatened if not visited. The income, salaries, work it will provide is the only thing that will keep them alive and away from the hands of the wood traffickers. It is an arm-wrestle. There can’t be mass tourism in Madagascar, it is too fragile for that. Only ecotourism for aware people can bloom.

I will try in the coming years to entice visitors to come to Madagascar because I truly believe the last patches of nature and the last lemurs need it as well as the people.

What other policies or actions would you like to see enacted to save Madagascar’s natural heritage?

If we want to save the Malagasy people as well as its amazing nature, the first step to take is a massive family planning policy, [implemented] by the government and subsidized by the world. Global aid didn’t work (or missed the point) in the last 60 years (since independence) because Madagascar became poorer and poorer. The human pressure on nature is unprecedented. There’s no way the government or the world can teach, feed, cure, and offer a future to 800,000 to 1 million new people per year. The people are turning to what is left of the nature. That is why it is receding and critically endangered. Without family planning and all its wide spectrum of solutions, I don’t see how that heritage can be transmitted to the next generations.

This interview has been edited for length and clarity.