Should Trump be listening to indigenous people on fire management?

It was only a tweet, but the U.S. President again this week used an inaccurate statement about forest management to make a broader political point: 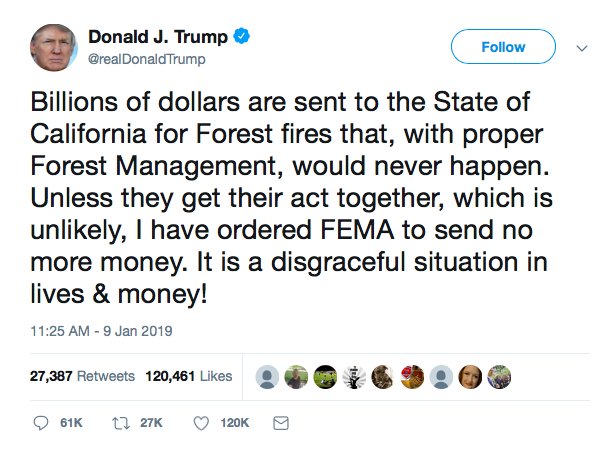 Forest managers and ecologists have widely panned these remarks, saying that the President’s idea of management in terms of cutting trees to prevent “mega fires” will not help the situation.

Observing all this from one of the European Union’s most fire prone countries, Italy, forest ecologist Giorgio Vacchiano told Mongabay this of the statement: “If we intend forest management in a traditional way, i.e., the cutting of mature trees for wood production, this can hardly be a solution to [the] issues.” A professor of forest management and planning at the University of Milan, he has however witnessed in his country the nascent success of what’s widely considered to be a better method, prescribed burns. In one study looking at areas treated this way, tree mortality from a subsequent forest fire was around 10%, versus 90% or more in untreated areas.

Native people have long stewarded California forests with the intentional use of fire, which prevents the buildup of fuels that lead to catastrophic fires driven by drier conditions caused by climate change: small planned burns also increase production of traditionally important food sources for the Karuk and Yurok, like huckleberries, acorns, and elk in a system called agroforestry.

And as Braxton-Little wrote, state and federal land managers are paying attention. “As these small-scale burns contribute to an understanding of fire at the level Yuroks and Karuks once practiced it, some state and federal officials are turning to them to guide management on federal lands. The project plan, signed in July by Forest Service officials, marks the start of a new Karuk-influenced management approach that could eventually include the 5,700 square kilometers of the tribe’s ancestral territory.”

Anne Kelly, a PhD forest ecologist and director of the University of California-Merced’s Yosemite and Sequoia Field Stations, agrees that this tradition is both old and beneficial: “Native American forest management and summer lightning meant the Sierra Nevada forest used to burn every decade or so [but] 150 years of fire suppression in the Sierra Nevada has changed the forest structure from mostly open stands of large trees to thick stands of skinny trees,” she explained by email. “These thicker, drier forests are more vulnerable to beetle attack, and trees close together are better at spreading fire.”

So it sounds like the President should listen to native communities on forest management, because it seems likely that he would otherwise declare his own idea of forest management is a ‘bad deal,’ as Kelly explains: “Trump blames environmental laws for killing the logging industry, but these trees are simply not marketable. If all logging was permitted tomorrow, there would hardly be a rush on the forests. Strategic thinning would also be of little help,” she says, and wonders if Trump would be willing to pay the approximately $2,000 per tree price tag she says would be required to remove each of the region’s 150,000,000 dead trees. Plus, she continues, “We are observing that logged/thinned forests are no better at surviving these hotter, drier conditions.”

“If poor forest management is to blame, the poor management has been to allow humans to alter our climate system, and to exclude low-intensity, frequent fires from the Sierra Nevada,” Kelly concluded.

Read about the indigenous tradition of prescribed burning by California’s indigenous peoples here.

Banner image of a forest fire via Pixabay