Deforestation in Earth’s biggest rainforest reached the highest level in a decade, reports the Brazilian government.

On Friday Brazil’s national space research institute INPE released its annual preliminary estimate of deforestation in the Brazilian Amazon. The data shows some 7,900 square kilometers (3050 square miles) of rainforest were cleared between August 1, 2017 and July 31, 2018, a 13.7 percent rise of over the 6,947 square kilometers cleared a year earlier. The loss represents an area 134 times the size of Manhattan’s land mass. 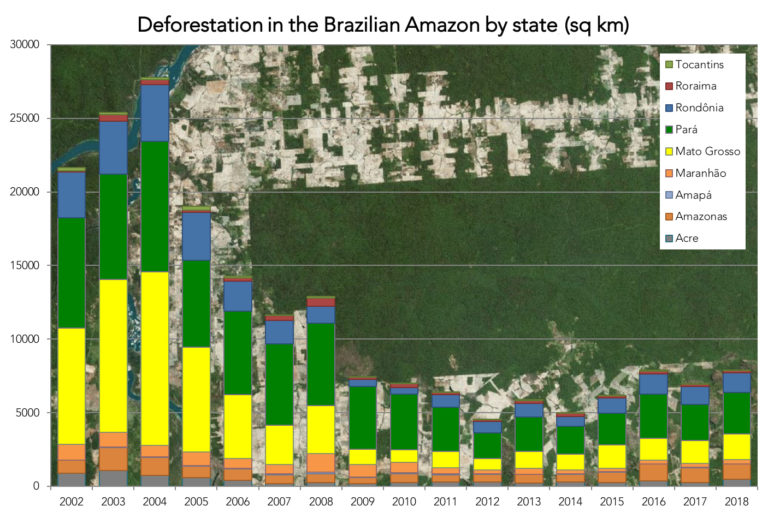 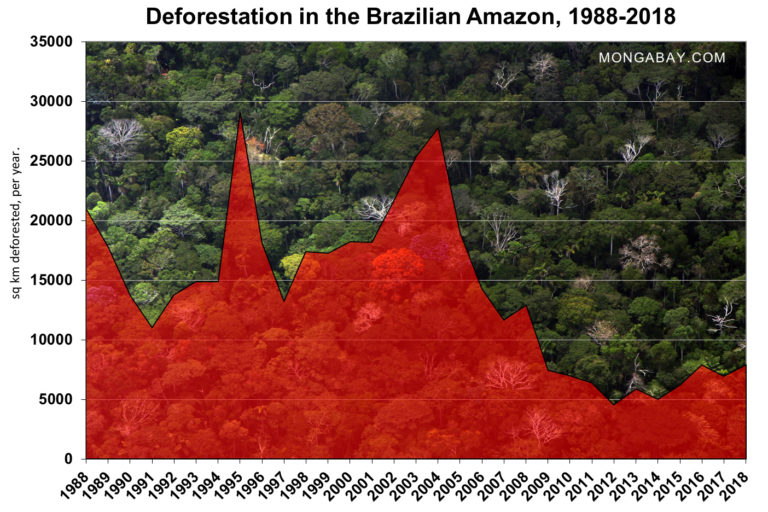 The states of Pará, Mato Grosso, and Rondônia accounted for nearly three quarters of deforestation. All three states are major agricultural commodity producers. Acre, a state which had been seen as a model in efforts to reduce deforestation, saw its loss increase 84 percent over the prior year.

The increase in deforestation was widely expected. Monitoring systems from both the Brazilian government and Imazon, a Brazilian NGO, have been showing deforestation trending upwards for months. Imazon’s deforestation alert system projected forest loss in the Amazon hitting a ten year high, which is now confirmed by the official data.

The rise in deforestation this year in Brazil is likely linked to current political and economic trends. U.S. President Donald Trump’s trade war with China has reduced the competitiveness of American agricultural products, boosting soy and beef exports from Brazil, including the Brazilian Amazon, which is a major producing region. Brazil’s weak currency is also increasing the profitability of agribusiness in the country at the same time that Brazilian lawmakers are pushing through measures to weaken environmental regulations and protections for indigenous peoples. President elect Jair Bolsonaro has sharply criticized environmentalists and promised to further roll back conservation initiatives across the country.

But Brazil has now missed the deforestation target it set in 2009 for four consecutive years. Deforestation for over the past was 41 percent higher than targeted — the worst miss yet. 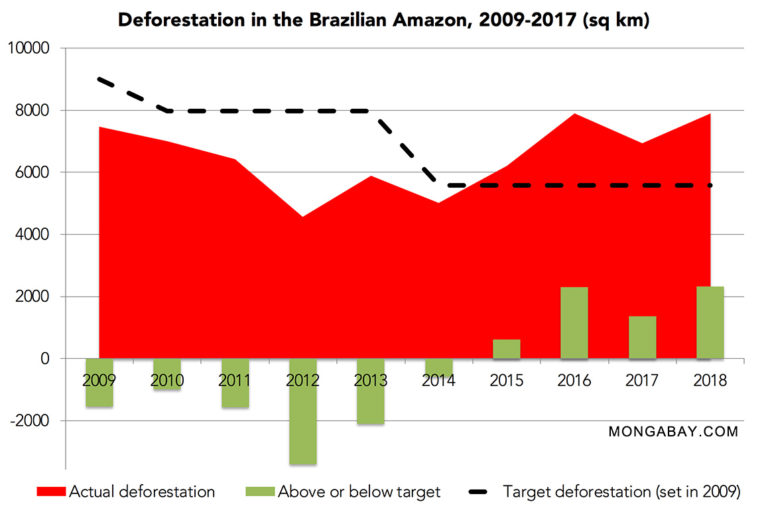 Scientists warn that ongoing destruction of the Amazon could have dire economic consequences in Brazil and beyond by destabilizing regional rainfall patterns — especially in the agricultural heartland of southern South America — and accelerating greenhouse gas emissions. Roughly a fifth of the Brazilian Amazon has been cleared since the early 1970s, while significant expanses beyond that area have been degraded by logging and fire. Brazil accounts for nearly two-thirds of the Amazon rainforest, which is Earth’s largest tropical forest.

The Brazilian government is expected to release the final numbers for the 2017/2018 deforestation year next April or May. Typically the numbers are revised slightly upward from the preliminary estimate.

Note: this story was adapted from an earlier Mongabay story, containing language from that story.