The 2017 finalists for the biannual Jackson Hole Wildlife Film Festival competition have been announced. Drawn from a pool of over 1,000 entries competing for only 25 awards, finalists include a diverse range of entries. One of those finalists is “Yasuni Man,” made by Pollywog Productions.

The film tells the story of the Waorani, hunter-gatherers who live deep in the biodiverse Yasuni nature reserve of the Ecuadorian Amazon. The inhabitants have faced waves of wealth- and soul-seekers from among the loggers, oil prospectors, and missionaries who have come and gone from the region for hundreds of years. Today, Yasuni is home to a conflict that has pitted oil and commercialization against biodiversity and human rights.

The film plays into an  increasingly popular notion that indigenous peoples are known to be master conservationists. The people in these communities tend to possess a wealth of knowledge about their environment that’s been passed down through the generations.

Mongabay questions for filmmaker Ryan Patrick Killackey: Tell us a bit about your background and your need to make this film.

Killackey: I have a degree in wildlife biology from the University of Montana. For nearly a decade I worked on research projects focusing on conservation and population dynamics. I mainly worked with reptiles and amphibians, snails and slugs, wolverines, fisher, bobcats and Alaskan brown bears. I moved to the Ecuadorian Amazon in 2005 to learn more about frog diversity. It was then that I first went into Yasuni and learned about the conflict that has pitted biodiversity and human rights against natural resource exploitation.

Yasuni is virtually inaccessible without support from the only people native to the forest, the Waorani. I was invited to visit the core of Yasuni by my film subjects. After a two-week stint in late 2009 to develop my story, and being truly mesmerized by my experience, I knew that I had an amazing story to tell that only I was only capable of telling.

I made the film because, Yasuni, our planet’s [editor’s note: arguably the] single most biodiverse forest is threatened, and the Waorani culture is struggling to survive westernization – all of which is mostly ignored by the public at large. On a small scale, no place on the planet matches the biodiversity of Yasuni. I’m quite empathetic to the plight of the wildlife and people who live in troubled regions that foreign and domestic governments are exploiting for short-term gains.

Mongabay: What was a highlight and a low point in making this film?

Killackey: Yasuni Man was a extremely difficult film to make. The biosphere is isolated, and access to my primary filming location is two days travel by boat through the territory of two Waorani clans that live in voluntary isolation. Intertribal warfare happens with regularity – violent confrontations between the people in isolation (Tagaeri and Taromenane). Dozens of people have been killed over the years – missionaries, oil workers, colonists and many Waorani.

Armed conflict is not the only concern. Venomous snakes and parasitism was unavoidable during filming, I was parasitized by botfly larvae and amoebas and was hospitalized a few other times for unknown sicknesses. Also, the sun’s harsh rays gave me skin cancer, several of my film subjects passed away from cancer and other diseases. Also, conditions are quite brutal – hot, humid, and wet. I had to be very conscious of protecting camera gear and battery usage. The harshness of this forest is quite apparent and as you will see, it’s an emotional roller coaster. 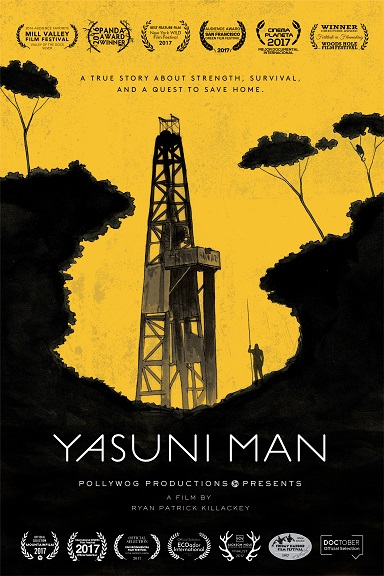 Most difficult was trying to find financial support for the film, which I did with limited success. I was so invested emotionally and I couldn’t let the film die because of lack of funds. So I stuck with it for seven years and every dollar I have earned working on other film projects was reinvested in Yasuni Man. It is a true indie.

Mongabay: What drew you to this issue?

Killackey: I love frogs and am quite passionate about wildlife conservation.  In 2005 and 2006, I spent 14 months working as a naturalist guide at an ecotourism lodge on the Northside of Yasuni to learn more about biodiversity. At the end of my stay, I went into the Yasuni biosphere for the first time on a herpetological research project where we studied the impact of oil roads on herpetofauna. This trip exposed me to the underworld of the oil industry, illegal bush meat markets and other struggles witnessed and discussed in my film.

To date, I’ve spent about 2.5 years living in Ecuador, mostly in Amazonia. When you spend that amount of time in a location you become very familiar with the people, places and animals. I’ve bonded with it all and really hope that the film can make a difference in helping to protect the world’s most biodiverse forest. I truly think that a documentary can change the future, for the better, and I hope my efforts in Yasuni are recognized and that the film finds the large audience it deserves.

Mongabay: What do you hope audiences take away from Yasuni Man?

Killackey: Yasuni is a microcosm where environmental, political, social and economic issues collide. It is a representation of all the places around the world just like it that need our help to prevent suffering from exploitation. I hope that this film exposes the impacts humans have on our planet’s most biodiverse regions and the indigenous people who are reliant on keeping their forests intact, and that it serves as a reminder to people that we have the capacity to make change. I hope the film motivates people to do just that, make change.

Also, later this year that data from the research featured in the film will be published in the online peer-reviewed scientific journal, Neotropical Biodiversity. The publication will serve as a companion piece to the film in the hope that it will bolster the protections in Yasuni. I hope both the film and the scientific data will be used as a tool by NGOs and scientific organizations to advocate for other places that lack adequate environmental and human rights protections.

Mongabay: Can people do anything to help?

Killackey: Yes! Stay informed on the issues by following us on Facebook, Instagram and Twitter – @yasuniman. Get on the campaign to “End Amazing Crude.” The NGO Amazon Watch has a great website through which you can become involved. There is also the Amazon Conservation Association, Amazon Aid Foundation, Amazon Conservation Team, Rainforest Action Network, Pachamama Alliance, Oil Watch, and E350.

Nearly 70 percent of Ecuador’s Amazonian petroleum comes to California. Assess your own impact – to reduce, reuse, recycle is just the beginning. You can also help get Yasuni Man to audiences by contacting us through our website. Or you can call or write your state and federal representatives and the Ecuadorian embassy in your city and tell them to divest from fossil fuels.

And of course – read more Mongabay!

Mongabay: What’s next or what are you working on now that you are especially excited about?

Killackey: I’m working on three documentaries all focusing on wildlife conservation, human rights and global health. I also have a few narrative projects that I’ve written, one is an ecological horror feature and the other is an epic historical fiction series that is based on a fascinating historical discovery.

Note: The Jackson Hole Film Festival is considered the “Oscars of nature filmmaking.” It is part of a greater week long conference that brings together that include “innovative filmmakers, organizations, scientists, journalists and visionaries from across the globe; all engaged in conservation, nature, wildlife and media,” according to festival organizers. The film festival winners will be announced during the week.